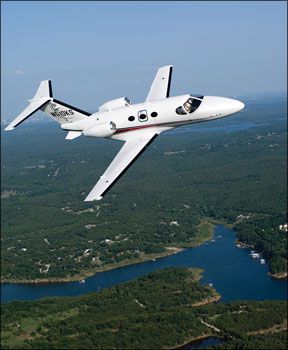 The long-awaited age of the VLJ has begun. The Eclipse 500 and the Cessna 510 Mustang are the vanguard of the new movement. Eclipse is now building almost one new jet airplane each work day. Cessna delivered 45 airplanes in 2007 and is ramping up to build two Mustangs a week.

There are already close to 200 VLJs out there. By this time next year that number will have more than doubled, and soon other manufacturers will be swelling the

One of the looming worries for VLJ builders and potential owner-pilots is what the cost of insuring these jets will be, or if it will be available at all for budding jet pilots.

The first entries into the VLJ market are finding one of the most receptive insurance markets in recent history. Depending upon how you count, there are between four and six new aviation insurance providers in the United States, on top of the companies that were already doing business three years ago. Competition is driving rates down and forcing insurers to look at deals they would not have looked at even three years ago.

About half the current underwriters routinely insure single-pilot jets. Much of the new, owner-flown, VLJ business is going to two companies: AIG Aviation and C.V. Starr. Representatives of both told us that they had quoted and insured a substantial number of Eclipse and Mustangs for private-owner pilots

Companies playing in the light-jet business for owner-pilots may be crossing their fingers, but they seem anxious to do business. Smooth limits of liability (those without passenger sub-limits) are available for virtually any pilot who has completed the manufacturers training regimen – something thats rarely true for pilots transitioning into piston twins. While just about all of the policies written for these airplanes require that the owner has successfully completed the manufacturers approved school, many do not stipulate a minimum number of flight hours required, which is unusual for new aircraft types.

Limits of liability available vary with the experience of the pilot. Most companies told us that they would not offer more than $10 million for any type of single-pilot operation, and only in cases where pilots had excellent experience. One company said they would offer up to $25 million if the airplane was flown by a single, professional pilot. Most amateurs with prior turbine experience will be able to get between $2 million and $5 million of coverage. Physical damage premiums also vary with pilot experience. Insuring the hull of a Mustang will usually cost more because the airplane is almost 50 percent more expensive than the Eclipse.

While total premiums and limits vary a great deal, it seemed from our conversations as if a reasonably qualified new Eclipse pilot could buy insurance for between $25,000 and $35,000 per year. More qualified pilots can buy higher limits and will usually pay less. A similar Mustang pilot might expect to pay between $35,000 and $50,000, simply because of the higher value of the airplane.

charge for it, the primary issue is how well a pilots experience and skill matches the airplane. If there are gaps in experience, underwriters are keenly interested in what kinds of training and testing are supposed to bridge these gaps. In the course of development, both Eclipse and Cessna met with underwriters to show them their training plans.

Both Cessna and Eclipse seem to take the cost to their business of unnecessary accidents seriously. Both also seem committed to doing whatever they can to make sure that pilots are ready to fly their airplanes. Both companies make extensive use of mentor pilots to shepherd owner-pilots through an initial operating experience after they complete the training courses. The amount of time an owner will need to fly with a mentor pilot can vary from two to 100 hours or more, depending upon the pilots background and learning curve.

FlightSafety and Cessna jointly developed a proficiency index for pilots enrolling in the Mustang initial training course. Well before showing up at the schoolhouse door, pilots answer a detailed questionnaire about their flying background, covering such areas as types of aircraft flown, instrument flight time and avionics used. Based upon their answers, FlightSafety determines to what level each pilot will train.

After completing the initial course, pilots are free to use mentor pilots to raise their experience and proficiency to the next level. In addition to motion simulators, the FlightSafety Mustang course makes use of flight training devices located in the learning centers for pilots to use primarily for avionics familiarization.

In the course of certifying the 500, Eclipse has changed every one of its major vendors, from engines to avionics. Its training vendor is no exception. Eclipse has partnered with Higher Power Aviation of Dallas for its training. HPA primarily provides airline-related crew training. Eclipse training takes place in Albuquerque, N.M., at an Eclipse facility. Trainees are required to complete an assessment of flying skills and a web-based course on jet-engine systems, high-altitude physiology and jet operations prior to starting the initial course.

Low-experience owners are encouraged to fly with a mentor pilot before starting simulator training. The type-rating course lasts two weeks and consists now of classroom and simulator sessions. Before the simulators, most of the early pilots were trained in-airplane. The type rating ride can take place in either the simulator or the customer aircraft. All new jet pilots are required to fly with an Eclipse mentor pilot. The amount and type of flying that each pilot does with the mentor varies. The mentor decides when the pilot is ready for solo flight.

Some pilots getting into VLJs are making uncommonly large jumps. An Eclipse spokesperson told us of at least one pilot who transitioned into an Eclipse 500 from a Cirrus SR22. Cessna told us that one of their Mustang owners received his multi-engine rating in the Mustang. Only time will tell if the training is adequate, but for now, insurers are betting that the steps that Cessna and Eclipse have taken will result in well-trained pilots who can handle the airplanes.

Cessna and Eclipse may be paving the road for Grob, Embraer, Honda, Epic and the other manufacturers who will eventually be building small jet airplanes. Thanks to good early experience, insurance is currently available and reasonably priced. If you are considering one of these airplanes, we recommend strongly that you contact an aviation insurance specialist for an idea of what insurance will cost you, and advice on a path to get you the experience you need. But we think for most folks moving up to one of these airplanes, the insurance wont break the bank.