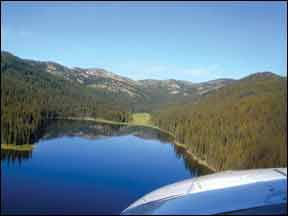 It’s one of those aircraft truisms that performance requires compromise. Controllability at low speed means compromising the wing that enjoys high-speed cruise.

That’s what makes vortex generators (VGs) seem too good to be true: They claim lower stall speeds in singles and twins without a penalty in cruise speed. Sometimes they bump up the gross weight. For twins, they reduce minimum controllable airspeed (Vmc). This is speed below which controlled flight becomes impossible with the critical engine failed and the other engine at full power. Below Vmc, there isn’t enough rudder and aileron authority to counter the natural yaw and roll of the asymmetrical thrust. Translation: The airplane rolls over and crashes.

Maybe it took this long for VGs to gain acceptance because some aeronautical designers considered them bandaids to make up where a wing design lacked. But from our tests and owner surveys over the years, there’s no doubt the little tabs do what they claim. It’s quite possible VGs are the most beneficial single safety enhancement you can make for your airplane.

Realistic Expectations
The gains are different for every airplane. But realistic numbers are four- to eight-knot reductions in stall speed combined with much better low-speed aileron and elevator authority (if elevator VGs are included). Some pilots tell us it’s the control authority they appreciate far more than the lowered stall speed. In twins, Vmc is often reduced to the point where it’s virtually eliminated. This is because the rudder has become so effective that the wing stalls before Vmc is reached. Note that many VG kits include a new face for your airspeed indicator to reflect the lowered speeds.

The boost in gross weight for twins is a direct result of the lowered stall speed. Light twins must have a single-engine rate of climb equal to .027 times the square of Vso. If stall speed is reduced and low-speed climb is improved, the aircraft now has excess climb, so the gross weight can be bumped up. However, the landing weight remains unchanged, as that’s more a factor of aircraft structure. Be sure to burn off enough fuel before you land your twin at the higher weight (or don’t tell anyone if you forget). Then again, you don’t have to fly heavier. Stick with the original weight and you might actually climb if you lose an engine at rotation.

VG kits usually consist of the metal tabs, adhesive and a template for positioning the VGs on the wing. The template is usually a wide paper strip that matches up with specific rivet lines or structures. The companies tell us that even an A & P with no VG experience should be able to complete an airplane in less than a day.

Placement is critical (see sidebar page 19). It’s usually far enough aft that de-ice boots or TKS systems are not an issue. Specific kits may also have fatter or curved plates, called strakes, at strategic locations. These are often to ease airflow around engine nacelles or boost elevator authority (even if the strake is forward of the wing).

Icing is a common question with VGs; won’t ice accumulate on them? It shouldn’t, as they don’t extend far enough into the active airflow (see sidebar on page 19). A possible exception could be clear ice with runback. But that may get past your boots and ruin your day no matter what. It is true that VGs make the wing harder to clear of last night’s snow, not to mention wash.

VGs can get knocked off. Most kits have an allowable number of missing VGs, below which you must use the original aircraft performance numbers. In some cases, losing too many VGs from one spot may make the aircraft temporarily unairworthy. VG companies all sell replacement VGs.

Selecting a Kit
Adding VGs is possibly one place where the adage about the weight of the paperwork exceeding the weight of the modification is true. The tabs are really just aluminum (or Lexan for some experimentals) glued to the wings and tail. But this is a major modification that changes aircraft performance, and you’ll need a kit STC’d for your airplane.

There are five major sources of VGs for certified birds. Micro Aerodymamics is the goliath leader in terms of STCs, with over 500 models covered. (Reality check: There are technically 32 “models” of Cessna 172 alone.) They’re still actively creating STCs, with Luscombe 8s and the King Air C90 just added. Charles White of Micro estimates there are upwards of 8000 aircraft flying with his company’s VGs. Micro also supplies the factory VGs shipped on new Maule aircraft and Piper Meridians. Micro kits are available directly from the company and through Aircraft Spruce.

Boundary Layer Research has the next biggest portfolio, focused heavily on piston twins. Many of these were developed by Aeronautical Testing Services, which also developed kits for some Cessna singles (120/140s, 180-185s), Piper tandems (PA-12, -14, -18) and ag aircraft. The Cessna and Piper kits are sold through CubCrafters and the ag kits are sold through Pacific Aero Supply or Mid-Continent Aircraft. RAM aircraft is well known for its upgrades on Cessna twins and offer their own VG kits. Bonanza and Baron experts D’Shannon Aviation offer kits for all models except B36TC, Twin Bonanza and Travel Air.

(If you enjoy soap opera, some digging will show that almost all of these companies are descendants of VG pioneers Paul Robertson, Charles White and Mike Anderson, who ended up at ATS, Micro and BLR, respectively.)

If only one of these companies has a kit for your aircraft, then your decision is made for you. If you have options, then it’s time to compare all the numbers. For example, a Cessna 414A owner could get a kit from Micro, BLR or RAM. The RAM kit is far cheaper, at $1650 versus $2950 for BLR or Micro.

But wait, the RAM kit doesn’t include the gross- and zero-fuel-weight increases that come with Micro and BLR because RAM has its own weight increases through its other STCs. BLR’s kit boosts GW and ZFW by 355 pounds. Micro’s kit boost GW by 350 pounds, but ZFW increases only 135 pounds. Micro’s kit drops Vs and Vso by 6 knots and 4 knots, respectively. BLR’s kit claims only 4 knots and 1 knot. RAM’s kit claims depend on whether you’re talking about a standard 414A or one combined with other RAM kits, with about 8 knots clean and 4-7 knots dirty. All nearly eliminate Vmc.

If you have an A36 Bonanza, Micro’s kit for $1450 seems like a much better deal than D’Shannon’s kit at $2000, except that the D’Shannon kit includes a 100-pound gross weight bump (as long as you have no other gross weight increase mods). If you don’t want the increase, you can just have the VGs for $1000. Micro gives a four- to six-knot reduction is stall speeds. D’Shannon tells us theirs is 7-10 knots. D’Shannon’s is also unique in that it uses an L-shaped VG it claims gives a more controlled vortex, and that it places a second row directly in front of the ailerons for better low-speed authority. However, Micro’s stall and Vmc reductions on the Baron 58 exceed D’Shannon’s.

In some other match-ups, however, the only difference we can see is price. Note that custom painting of your VGs to blend in with your paint scheme will cost extra, and it might be tough to tell what color to get until they’re actually on the plane if you have a complex paint scheme.

Kit builds, New Designs
Micro and ATS both offer kits for some popular experimental aircraft (including Yak-51s and CJ-6s registered as experimental) and generic kits where a homebuilder can add VGs through trial and error. There are also a couple companies catering directly to homebuilders, including Hall Brothers (www.hallwindmeter.com), STOL Speed (www.stolspeed.com), Land Shorter (www.landshorter.com) and Pacific Northwest Aero (www.pnwaero.com).

These kits are a relative bargain at $300-$400. Theoretically, you could add VGs to an LSA with approval from the manufacturer. We’re not sure it would be worth it given how much control authority LSAs tend to have and how slowly they can fly before a stall. Pacific Northwest Aero can also ship kits to some Canadian owners maintaining antique birds under the Owner Maintenance Program.

Given how precise the placement must be for VGs, we asked Jerry Lundgren of Pacific Northwest Aero how a homebuilder can do it. It turns out that most wings get maximum benefit at nine- to 11-percent of wing chord. The Pacific Northwest Aero kit is more complete than many others in that it includes tufting material to actually visualize separation and carpet tape to experiment with VG placement. Successes have ranged from better elevator authority on RV-9s to seven- to 10-knot reductions in stall speed on rockets like the Lancair 360. The Lancair owners say it costs maybe a knot in cruise.

Lundgren told us an interesting story about the Lancair IV-P: “We put some VGs on the wing at about 11-percent chord and it wouldn’t stall … With full aft stick, it was just descending without a stall break.” Lancair IV-P owners sweat if the airspeed drops below 100 knots anywhere before the landing flare, so this looks like the aerodynamic equivalent of raising Lazarus. But it came at a price: “We lost 11 mph at cruise speed,” said Lundgren. Positioning the VGs further aft reduced the penalty, but the old stall behavior crept back.

This speaks to the question as to why no VG kits exist for designs like the Cirrus SR22, which has been involved in some high-profile stall-spin accidents. No one we asked could say if they’ve researched a VG configuration that would complement the existing leading-edge cuffs, which provide similar low-speed aileron authority.

Charles White of Micro said he wouldn’t rule out a Cirrus kit if he had an airplane to experiment with for a month. Micro just finished a kit for the Diamond DA-42 that drops Vs by five knots and Vmc by nine knots, so there are gains even on newer, already-docile wing designs.

Worth a Look
White says he’s most proud of the 71 calls he’s gotten from owners saying, “Thanks for saving my life.” Two of those were Cessna 340s that had an asymmetrical flap extension—usually the last emergency a 340 pilot will ever experience. They both had enough aileron authority to prevent the rollover and land.

That’s a rare event, but when a $700-$2500 investment can give that kind of a controllability gain, we think it’s money well spent.