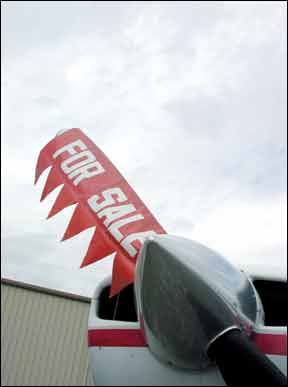 As a professional aircraft appraiser, I was retained to perform an appraisal on a 1978 Grumman AA5B Tiger not too long ago. I met the owner at his hangar and when he rolled open the hangar door, I wasnt prepared for what I saw.

It was one of the saddest airplanes that I have ever seen. It sat in a hangar that had housed it for three years as it collected dust on what had once been a good, fresh paint job. Its partially deflated tires were sitting in an inch of water, possibly from a roof leak. This airplane showed three years of neglect. Fortunately, the

sliding canopy was closed so most of the dust had not penetrated the interior.

The airplane was about three years out of annual and it had not been flown or even run in those three years. This airplane was not going to appraise for very much money, even though the owner expected that it would.

What was really sad was that the owner had owned the airplane for several years and had taken good care of it until three years before the appraisal. He had even installed new avionics just before he abandoned the airplane to sit idle in the hangar. If he had performed just two annuals and taken a trip around the patch once a month, it would have been worth several thousand dollars more in its market value.

This owner was not alone in presenting his airplane for appraisal without properly preparing it. It doesnt take much effort to make an airplane more presentable and valuable without investing much or any money. I have appraised airplanes that have not had the interior cleaned since the last long flight. Surprisingly, this occurs quite often in corporate, cabin class and turbine equipment, which you would expect to be better cared for.

One Navajo had a week-old fried chicken dinner that had been left to spoil in the cabin. After one week in a closed cabin sitting in the Texas summer sun, the cabin was pretty rank. This was not an isolated case, either. For some reason, many owners dont clean the cabin even when they know an appraiser will be looking at the airplane.

“Just check with the FBO and they will give you the key and/or open the hangar for you,” is about all the effort some owners are willing to exert. When I ask about the logs and records, many owners sound puzzled and even ask if I really need them. Yes, I really need them. They are a core part of assessing the value of an airplane. Make no mistake, the logs and records are 80 percent of what I need for a good appraisal.

Lets go back to our poor abandoned Grumman Tiger. Up until the day he began neglecting it, the owner had kept meticulous records and had maintained the airplane on a regular basis. This was reflected in the logs and records. While nothing could erase three years of neglect, good records helped establish that the airplane had been well cared-for most of its life.

Consequently, the appraised market value was for more than it would have been without the records. Keep this in mind when youre organizing your own records. Well preserved records will return far more than the effort it takes to organize them.

Technically, I guess it shouldnt make a difference in the appraised value. But, lets

be honest about it. I am a human being, as are my fellow appraisers. Even though I try not to let such things affect my appraisal, I am sure that, subconsciously, they do. If an owner doesnt have enough pride of ownership to prepare his airplane for the appraiser, what else has been neglected?

Think of the appraiser as a buyer, which is pretty much what he is, since he is quite often acting as the eyes and ears of a buyer who may live more a thousand miles away. In fact, I have appraised jets for clients in the Bahamas, South America, the U.S. Virgin Islands, Jamaica, Mexico and as far away as South Africa who made their buying decision based, in large part, on my report. So in a sense, I am the buyer.

What does an appraisal entail? Ideally, I like to be able to look at the airplane from at least 50 feet away initially. How does the sun reflect off of it? How does it sit on its gear? Does it sit kind of wing low? If it does, it may have some problems that I need to check the logs for, perhaps an accident or a hard landing has sprung the landing gear. Then I move to within 20 feet. At this distance, I can see minor corrosion far better than I can close up. It is also a good distance from which to take pictures. Then I move close and examine for scratches, dings and other hangar rash using my eyes and my fingertips to detect chips, orange peel and other defects on the surface.

So what can you do to prepare for the appraiser? First, give the aircraft a bath and a thorough cleaning inside. On the day of the appraisal, park the airplane outside so that the sunlight glistens off of it.

Second, make sure that all logbooks, receipts and required documents are available, preferably in the aircraft, for the appraiser to examine. All doors should be open. I have flown hundreds of airplanes, but I dont remember how the doors work on all of them. This is especially important for pressurized aircraft.

Third, be present during the appraisal to answer questions. The appraiser will have many questions that only you can answer. For instance, many airplanes have been

modified in some way. The modification might be anything from a quick oil drain, or a spin-on filter, to a larger engine or maybe a STOL system. The appraiser needs to know how much the modification cost, who did the mod and when it was done. Keep in mind that you wont recover the full cost of the mod when you sell the airplane.

For instance, if your airplane has an upgraded engine, the appraised value of that upgrade will be a fraction of what it cost to install. The original engine can be replaced with a stock engine that sells for $35,000, while the upgrade engine sells for $45,000. Many owners think they can count on the full $45,000 when it comes time to tabulate the market value of the airplane. It just doesnt work that way.

The actual added value is $45,000 minus $35,000, or $10,000 and this figure is then depreciated for age and hours of usage. Usually, the figure is between $5000 and $7000. Also, unless you are paying for the appraisal, the appraiser cannot divulge the appraised value to you. This rule is as inviolable as attorney-client privilege.

So it behooves you to be present while the appraiser is working. Remember, the value added will always be less than the cost of the mod, whether it is an engine mod, cuffed wingtips, or any of thousands of mods that can be applied to an airplane. You may know all about the mods, but if you dont tell the appraiser, he has to look for them in the airplanes records. The chances are that hell miss something. The appraiser is not going to ask to fly the airplane or even run the engine. He assumes that if the airplane is in annual, it will fly. If it is out of annual, then that will be reflected in the appraised market value. And it will be less than it would otherwise be.

The appraiser will take lots of pictures of both the exterior and the interior. (If the owner plans to sell the airplane, he can use the pictures that are taken for his ad, provided he is named on the appraisal as being the client). I also take pictures of the logbook pages so that I can study them on my computer. Before digital cameras, I spent hours in the corner of the hangar perusing the logbooks.

Because I am a member of the National Aircraft Appraisers Association (NAAA), I

have been speaking about NAAA appraisals, although most appraisers look for the same criteria when building an appraisal. We use different databases, however. I use the extensive NAAA database, while others may use Bluebook, VRef, or some other database. Whatever database the appraiser uses should be based on the actual selling price rather than the advertised asking price. Remember, the seller never determines the market value of an airplane; the buyer does.

If you need an appraisal for tax purposes or for a donation, the Internal Revenue Service now requires that you obtain an appraisal that meets the Uniform Standards of Professional Appraisal Practices (USPAP). Also, turbine aircraft, because of their complexity, will be appraised according to USPAP standards in the near future. A USPAP certified appraiser has taken a course in standards that meet USPAP criteria. Many NAAA certified appraisers are also USPAP certified, so one good way to find a USPAP appraiser would be to ask NAAA.

A USPAP appraisal is more in-depth than is needed for most purposes, such as financing, insurance and the like. Since its more expensive, an aircraft owner is better off with a regular NAAA or similar appraisal.

Finally, why is an appraisal needed? The most obvious reason is so that you, the owner, can set a good selling price. For both buyers and sellers, it gives realistic starting places from which to begin negotiations. Sometimes, without this, buyers and sellers may be too far apart to even talk.

Also, banks are required by the FDIC to have a certified appraisal on record to substantiate collateral value. Perhaps an owner wants an appraisal to verify the aircrafts value in case of loss. There are other reasons, too, such as estate and divorce property settlements. Last, what if something catastrophic happened to your airplane? As I write this, tornadoes are wreaking havoc across the U. S. and I am sure that many airplanes have been destroyed. I only hope, for their owners sake, that they had a recent appraisal on hand. In most cases, an appraisal costs less than an annual, and I can make the case that its worth having.

Bicknell Eubanks is a certified NAAA appraiser. Reach him at www.b-and-e-aviation.com.