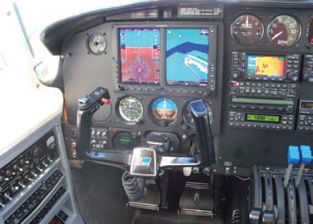 When Garmin’s capable G600 retrofit PFD system came to market somewhere around 2008, it wasn’t the brisk seller many shops hoped for. Its sticker price closing in on $30,000 was part of the problem.

This snag was part of the thinking behind the G500, a lesser-equipped system certified for aircraft with an MTOW under 6000 pounds and with à la carte pricing to add capability as needed.

But there are things the G600 can do standard that the lesser G500 won’t do at all, let alone for an extra fee. Here’s a feature-for-feature comparison of these two systems that helps make sense of the unnecessarily complicated buying decision that’s stumping ready buyers. We won’t cover the user interface. You can read about that in our February 2007 issue of Aviation Consumer.

Both systems have multiple TSO approvals and carry STC with a healthy Approved Model List (AML-STC). But it’s the higher level of software certification that makes the G600 a player in Class III aircraft (typically larger piston and turbine models between 6000 and 12,500 pounds). Class III aircraft require Level C software versus Level B for those of you keeping score at home. If you’ve got a King Air, you must go with a G600. It might be possible to get a field approval for a G500, but we wouldn’t count on it.

A bugaboo that surfaced when the G500 was introduced related to aircraft originally certified under 6000 pounds, but with aftermarket STCs putting them over the 6000-pound limit. The consensus is that the original certificated weight applies and a G500 should be fair game.

Both systems have nearly identical required installation processes and approved interfaces to other equipment. Whether you install a G500 or G600, a Garmin GNS 400W/500W-series, CNX/GNS-80 or GTN-series navigator must drive it. Either system must be backed up by an independent attitude, airspeed and altimetry source. These are the three steam gauge instruments (or certificated combination glass backup instruments) you’ll find in all certificated glass panel aircraft.

The G600 and 500 use the identical GDU620 combination PFD/MFD display, with dual 6.5-inch diagonal color screens housed in a single bezel. You won’t tell either system apart by looking at the PFD’s flight data or thumbing through the pages in the MFD, as there’s no obvious difference in how data is presented or in how the system is operated. Bezel key and control layout is identical. The G600/500 is essentially trickle-down technology from the Garmin G1000, and both use identical Line Replaceable Units (LRUs) that feed the display a host of data.

We get asked what systems interface with the G500 vs. G600, and the truth is they’re essentially the same.

Options are generally easy to add to a G500 using SD enablement cards that, for a price, unlock the features and functionality that may already exist inside the systems software. The G1000 system works the same way. SD cards are also required for terrain, obstacle, Garmin FliteChart, SafeTaxi and Jeppesen ChartView database storage. Since these cards must be inserted into the GDU620 all the time there’s no sharing the cards with your hangar buddies. (They encode to your specific G500/600 after they have been installed.)

One major component that’s standard on the G600 is the GAD43 autopilot gyro emulator. The GAD 43 is a remote box that converts AHRS digital pitch, roll, heading and yaw rate data into analog signals used by attitude-based autopilots to include the popular King KFC200/150 series and some ARC/Sperry autopilots. The analog signals from the GAD 43 emulate those of traditional spinning gyros that feed pitch and roll data to the autopilot and allow the gyro to be tossed and replaced by the AHRS-fed GAD 43 (you’ll still need a backup attitude source on the panel).

From our experience, the GAD43 is a terrific upgrade to old analog autopilots. Either system can connect to an S-TEC 55X autopilot, complete with altitude preselect. Compatibility with S-TECs digital DFCS systems is a $6995 option on either system. Out of the box, both Garmin systems provide GPSS digital steering standard and will support flight director functions on the PFD.

Standard on the G600 but a $4995 option for the G500 is Garmin’s synthetic vision, known as SVT. In case you’ve missed the synthetic vision hoopla the past few years, synthetic vision depicts a forward-looking display of the topography immediately in front of the aircraft. The depicted imagery is derived from the aircraft attitude, heading, GPS three-dimensional position and a database of terrain, obstacles and other relevant features.

Standard and pre-installed on both systems is Garmin’s FliteCharts and SafeTaxi surface diagrams. FliteChart functionality is disabled 180 days after the charts expire. Jeppesen’s georeferenced ChartView approach plates and airfield surface charts require a $2395 enablement plus subscription through Jeppesen.

Both systems can play traffic and XM Weather when inputted by appropriate traffic systems to include TIS, TAS and Garmin’s new TAS/ADS-B combination traffic system. Weather and satellite entertainment for either system comes from Garmin’s remote GDL69A XM receiver that can input without the need for an optional enablement card. The GDL69A has a list price of $3600. For real-time lightning data, either system accepts input from the proven L-3 WX500 remote Stormscope without enablement.

TAWS-B is the certificated terrain-alerting system that’s required of turbine-powered aircraft with six or more passenger seats. The G600 can fill that duty when fitted with the $7995 option. This is done internally and without the need for a remote box.

Uncertified terrain-awareness comes as standard on the G500, but upgrade to certified TAWS-B functionality isn’t possible. Either system has a $2395 option to overlay radar-altimeter data on the PFD from the Bendix/King KRA10A.

It Comes Down To Weight

If you fly a Class 3 category machine or require full-up TAWS-B, you have no choice—you need a G600. But for most Class 1 and 2 aircraft, we can’t see any reason to buy a G600. A G500 purchased with the GAD43 autopilot emulator and SVT synthetic vision (two popular options) is still a $7519 savings over the equally equipped G600. Popular options such as Jeppesen ChartView and third-party radar enablement don’t change the picture because they’re options on both systems.

We think adding the G500 was a smart move on Garmin’s part, making it a more affordable step into retrofit glass, which is just the way Garmin intended it to be.