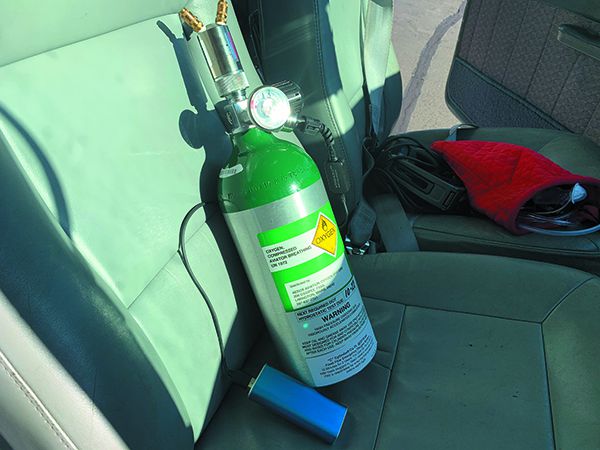 I read the portable oxygen system market scan article in the November 2020 issue of Aviation Consumer with interest. The problem with oxygen for the aircraft is it’s difficult to find a place to refill the tanks. The AFD shows oxygen available at many places where it actually is not available. Plus, most places say they can’t fill small personal bottles. It might be good to have an article about where to find O2, or where it is actually available. I don’t want to buy the equipment only to never use it for lack of a location to keep the bottle full.

You have a valid concern, so we asked Scott Ashton at Aerox to weigh in. “Refilling oxygen is one of the most common questions and barriers to use that we see among our customers.  Most FBOs that service larger aircraft should have oxygen service, and should also fill portable systems.

“Most portable systems use a CGA540 thread on the bottle’s neck that any FBO with oxygen should have. Some of ours use a Schraeder valve to fill the tank instead. There are a few other connector types for other systems, so check ahead with the FBO and look at your manual. If you use oxygen regularly, I recommend filling your own tanks by buying larger tanks of ABO from an industrial gas supplier to keep in the hangar. By setting up a multi-tank cascade, you can fill your own tanks much more economically and conveniently.”

I read the angle of attack article in the December 2020 issue of Aviation Consumer and I can say that in my experience, an AoA system is a waste of money. I have only one data point, but it’s worth sharing. I flew 150 hours with an Alpha System AoA installed in a Turbo Aztec F. We calibrated it in flight with the technician who installed it and I have a lot of confidence that the calibration was done correctly.  We flew three calibration flights.

I know all the aerodynamics—an airplane can stall at any speed (blah blah) and it’s all about exceeding the critical angle of attack. There are many aspects of twin-engine flying, but one critical aspect is that enough airflow is needed over the vertical stabilizer to counteract asymmetrical thrust. AoA does not do anything for that, but airspeed does. Typically, you want most of the time to fly above blue line especially in single-engine work (and by definition above stall and Vmc). Rotate at or after blue line (assuming that the runway is long enough) and keep it there until short final with a low power setting where asymmetric thrust would be less of a concern.

The only time the AoA made itself known aurally is on short final—getting slow, getting slow, etc. all the way to touchdown. Very annoying, to say the least, and for me a distraction, especially since the airspeed was right on target.

I’m not sure that that an AoA system would be of use in my Mooney.  Near stall, the Mooney has a very pronounced buffet, so I tell Mooney pilots that if you don’t feel a buffet, you are above stall. In my Mooney with micro VGs, I cannot stall. I just get lots of buffeting. Maybe I could stall it by pulling a +3G dive recovery, but have not tried it. When would the AoA be useful? Maybe consider Navy pilots landing (or mini-crashing) on short runways surrounded by water. They have to be at the slowest speed and that would be right above stall, so they fly AoA. Another possibility is for short-field landings where you also want to be as slow as possible, and an AoA backstop might help there.

Maybe the culprit for my conclusion is the Alpha System indicator in the Aztec.  It does not show AoA per se, but three or four discrete steps that indicate approaching the critical AoA. I might feel differently with an indicator which actually shows continuous AoA, and not discrete increments.

Thanks to everyone who follows us on our growing social media channels. This is a good way to keep in touch between issues, especially if you have a field report or experience to share about products you’re using. Looking ahead, we plan to bring more new content over our digital platforms, including live broadcasts of roundtable discussions and product demos and industry and regulatory news.