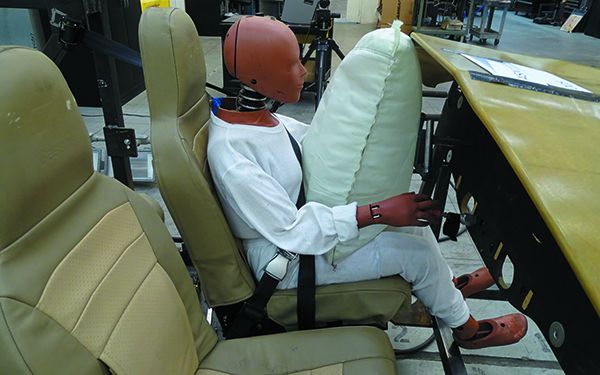 I read the seatbelt airbag article in the August 2020 Aviation Consumer and promptly ordered an AmSafe SOARS kit for my Mooney. The installation was straightforward, and I’m hoping never to provide a user review. As a physician, I’ve seen the horrific damage to a face that’s taken a severe blow in an accident. Many drivers and pilots/passengers have suffocated after hitting the panel or yoke, while survivors deal with pain and disfigurement. Three-point belts reduce this.

Fundamentally, SOARS is a bolt-in replacement for the shoulder and lap belts, and has a tiny crash sensor and explosive inflater cartridge. Installation time for this first-time install was three hours, including researching the installation instructions online (they’re not in the box, nor is the FAA Form 337). It also includes removing and replacing the belly panels to make sure the screws holding the crash sensor (EMS unit) wouldn’t impinge on anything. I’m confident a second install would take half that time.

There are two installation decisions, and the first is where to locate the inflater cartridge and how to affix it. We used standard circle pipe clamps and bolted it horizontally to the back of the seat frame (not the seatback frame). The inflater tube loops around the outside of the seat. AmSafe says not to kink the tubing by having more than two 90-degree bends. That’s not hard. Next is deciding where to mount the sensor, which uses a self-contained battery—not ship’s power.

It must be pointed straight forward and positioned level. The wiring must accommodate the full seat movement. We put mine in the middle of the rear floor behind the gear safety latch. Only small children are ever in the rear, and if they use their belts and shoulder harnesses, they won’t need an airbag.

It’s very important to disable the system by unplugging the connectors between sensor and cartridge before removing the seats or working on them. I created a warning label and put it on the wire harness next to the sensor.

In this install, I learned two things. I lost track of the fact that the buckle of any three-point system must be at the side of our hip to be effective. And, the inside edge of system’s airbag should be roughly to the front of your inside pelvic bone. The bag should not be centered. There are adjustment buckles on both the inside and outside seatbelt straps to make this possible for people of any circumference. AmSafe provides a solid-foam pelvis manikin to create a safe initial installation.

It is clear that people of large or small size will need to adjust the belt length on each end. The outside buckle will likely be hard to adjust after sitting, especially by a large person.

I’m thankful for Mooney expert Jason Doscher at Jed-Aire Aviation in Benson, Minnesota, for a skilled and swift installation.

I read your article on budget IFR upgrades (May 2020 issue). I’m a low-time VFR pilot with a Piper Cherokee 235 and want to start IFR training and plan to replace my Garmin GNC 300XL GPS/comm. I have the option of a used GTN 650 for about $7800, or a new GNC 355 for $6200. I can only do this once so want to get it right. Any thoughts on the best option considering the smaller price difference with a used GTN 650?

We would want to know if the used GTN 650 still has any factory warranty, where it came from (was it in a wreck? a flood?) and if it comes complete with a WAAS antenna and a fresh installation kit. A factory-new GTN 650 is $11,995  list price, so the savings is substantial if it’s a good unit with a new install kit. There are tradeoffs for either decision.

The GTN 650 doesn’t come standard with Garmin’s Flight Stream wireless system, but the GNC 355 does. The GTN 650 has a VHF raw nav receiver so you can fly ground-based nav procedures including ILS approaches. The GNC 355 has WAAS GPS capability only—no nav. In either case, don’t forget you’ll need a compatible nav head or EFIS for course guidance.