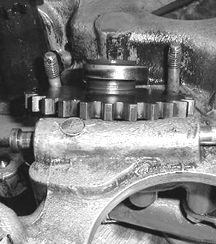 Shopping the market for an engine overhaul is often an act of faith. Short of looking over the mechanics shoulder when the engine is assembled, an owner relies largely on the reputation of the shop doing the work.

An example of the latter recently surfaced in an F-model Mooney being serviced at contributor Coy Jacobs shop in Florida. The airplane had fresh major overhaul done by Phoenix Aviation, a Missouri shop no longer doing business.

With only 29 hours on the overhaul, the Lycoming IO-360 showed excessive oil pressure when started cold but low oil pressure at cruise and idle. Worse yet, the oil pressure was so erratic that the prop governor wouldnt operate correctly, leading to runaway RPM settings.

After warm-up, the oil temperature ran higher than normal. Also, the engine was using what appeared to be excessive amounts of oil.When A&P Danny Schultz tore the engine down to locate the problems, he found the sort of basic engine assembly sins that every owner dreads hearing about, let alone encountering.

Usually, when temperature-related oil pressure problems are noted, the problem relates to sealing or relief valve issues which should be corrected when the engine is run-up on the test stand. (Assuming, of course, that it is given a test run.) Not this time. Schultz found that when the case was assembled, sealant was placed on the clamping bosses for the critical front main bearing, an area where no sealant is supposed to be.

The sealant essentially formed a plastic shim which kept the case halves from properly mating and clamping the bearing. Result: Pumped oil bled around the bearing, causing the low oil pressure.

Worse yet, the clamping bosses for the center and rear main bearings were fretted, which prevented them from properly clamping the bearing shells. Standard procedure for any overhaul is to inspect the crankcase halves for flat and wear-free mating surfaces and to send the case out for rework to acceptable specifications, if necessary. Further, sealant is supposed to be used sparingly only on one half of the outside surfaces of the case.

With oil bleeding between the improperly set bearings, the warm oil pressure would have been quite low. To cure this, the shop evidently shimmed the oil pressure relieve valve spring, which caused excessive oil pressure on cold start-up.

Other discrepancies: The fuel pump plunger rod was assembled upside down, which caused the idler gear cam surface to be damaged. The accessory case hadnt been modified, as required by Lycoming, to provide positive lubrication for the oil pump impellor shaft, another excessive wear issue.

The prop governors RPM control problems were caused by an improperly installed gasket, which partially blocked the governors oil supply. This gasket could have failed, causing loss of engine oil. All of the connecting rod bolts were torqued below specification, raising the specter of rod failure and engine destruction. The vacuum pump seat was deformed at installation and the tach drive shaft was worn beyond use, as were the rocker arm bushings.

Last, the crankshaft oil seal was installed with the wrong sealant and was loose on the case. To make matters worse-although perhaps not directly related to the overhaul work-the cylinders were glazed, probably the result of improper break-in during the initial test run of the engine.

This was likely the cause of the engines high oil consumption. (This is to be expected during the engines initial test run and break-in but should improve as the rings seat.)

Obviously, the fix for this mess is to start over. Fortunately, the major components such as the crankshaft and crankcase were salvageable, albeit in need of some basic machine work that should have been done in the first place. Honing the cylinders and proper reassembly would bring the engine up to service overhaul limits.

The aircraft records dont show what the owner paid for this overhaul but we hope it wasnt much. The mistake the owner made was shopping for cheapest-and perhaps fastest shop-apparently without regard to reputation. The assembly errors are so egregious that we cant imagine this being a one-time human error oversight.

In the end, the overhaul will have cost the owner as much if not more than a premium job from a reputable shop would have cost, possibly including new cylinders. And reputable doesnt necessarily mean big or nationally known.

There are plenty of good field shops out there capable of turning out quality overhauls at fair prices. But in accepting a bid from an unfamiliar shop, any owner is wise to do so only if there are positive and recent good recommendations. Lacking such, a cheap overhaul may be anything but.