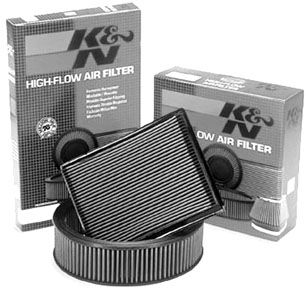 When you think about it, piston engines are really air pumps. The more air and fuel you put in-at the proper air/fuel ratio, of course-the more power or torque you get out. Hot rodders spend lots of time, effort and money trying to increase the amount of air flowing into the cylinders via better cam designs, intakes piping and cylinder head designs.

As a result, they know all about high-performance air filters, something thats usually just a slap-on after thought in airplane induction design. Yet the type and condition of your air filter/cleaner can make a substantial difference in the output of your engine, which may be noticeable in takeoff, climb and cruise performance, or lack thereof.

Finally, after the ordinary air filter has been ignored for years, a company has adapted leading-edge automotive technology to aircraft and to our research, such filters seem to deliver a bolt-on horsepower increase of up to 5 percent.

Filter Tech
Making filters is a huge business as nearly every type of air-breathing machine needs one of some sort. Typically, most GA piston-engine intake filters are made of dry fan-fold or pleated paper media elements. The two largest manufacturers of filters are Fram based in Toledo, Ohio and Minneapolis/St.Paul-based Donaldson Filtration Services. Years ago, Fram quit making GA intake filters and today most are made by the industry leader, Donaldson, who also makes many automotive, motorcycle and marine filters marketed under private labels.

Most FAA-approved GA foam filters are made by Kingman, Arizona-based Brackett Aero Filters Inc., a company which developed a line of highly effective oil-coated foam filters during the 1960s in response to a problem the FAA recognized with paper filters catching fire in backfire situations. Paper filters also deteriorate due to lack of attention and/or excessive dirt accumulation.

This problem became so much of a concern, the FAA issued an AD (84-26-02) in January of 1985 against paper filters. As the typical pleated paper element gets dirty or blocked, the restriction increases and the pressure on the filter element itself can increase.

Starving for air, the engine can actually suck-in and digest fragments of a deteriorated paper element so its important that paper filters be changed regularly.

According to Terry Capehart, a well-regarded aircraft engine modifier, Brackett filters are most effective in severe dusty situations, such as operations in the Western U.S. or on un-improved strips. Bracketts Scott Brackett reports that his line of filters are currently used as OEM equipment on Maule, Socata, Diamond and Extra among others, and at some $11 to 15 per element, theyre economical to replace rather then clean.

Most owners and shops agree that Brackett foam filters are a vast improvement over paper. They eliminate the backfire issue and in rain, they dont become sodden and reduce airflow, as paper tends to do.

Cotton Gauze
Vandalia, Ohio-based Challenger Aviation Products Inc. is headed by Chuck Rocco, formerly a VP at both McCauley and Hartzell propeller companies. Rocco recently made a deal with K&N Engineering of Riverside, California to manufacture his line of oil-impregnated, surgical cotton gauze-based filters to be marketed under the name of Challenger Aviation Filters.

K&N is well known in the high-performance automotive and motorcycle aftermarkets for producing a highly effective but low-restrictive, washable cotton gauze filter which uses oil to help trap dirt and grit.

Their filters are well respected and typically measurably increase horsepower output when compared to the typical dry paper filters you see at automotive outlets.

Their pleated cotton/wire mesh filters are far less prone to being clogged than synthetic media or paper, and tests done by Challenger (at approximately 240 CFM air flow) show K&N filters typically flow 6.03 CFM as compared to 4.95 for the average pleated paper element and 4.93 CFM for the oil-coated foam variety.

While we will perform our own independent flow tests in the future, if these figures are accurate-and numerous independent automotive sources we contacted about K&N filters indicate they are-then Roccos claims of the K&N/Challenger filters increasing the effective horsepower of the typical GA engine by 3 to 5 percent seem plausible to us. K&N claims more power gain in a car or motorcycle application but thats primarily due to greater operating RPM and the less restrictive intake systems associated with these engines. Also, keep in mind the gains posted are typically at high-power settings and not at idle.

Interestingly, and as a side note for GA users, K&N tests showed that its possible to gain over 25 HP in cars equipped with cotton filters over the paper designs that are typically provided by the factory.

Besides his deal with the automotive high-performance filter leader, K&N, Rocco also distributes a line of oil filters manufactured in Germany by Mann to K&N specs. These are sold under the Challenger brand name as well.

GA Dyno Tests
Listen to the guys who actually run engine dynos and theyre nearly universal in emphasizing the value of an effective low-restrictive air filter. In fact, some years ago this point was driven home when I spent time at Terry Capeharts high-performance aircraft engine shop at Mena, Arkansas.

After tricking out a Lycoming IO-360, he removed the Brackett filter and replaced it with an OEM stock Mooney paper element and repeated the dyno run.

For some reason, I had always assumed that the improved after-market oil-impregnated Brackett foam filter was better than the stock Mooney paper filter. Nope, said Capehart, They simply dont flow the air a paper filter does and in most dyno tests we have run, they actually cost you 3 to 5 HP.

Capehart added that in his opinion, a dirty foam filter could cost up to twice that when it gets dirty and/or wet. Just to be clear on this, however, we did not specifically dyno test the Challenger filters since they werent available at the time.

Scott Brackett of Brackett Aero Filters, concedes the point but also explains that his company provides a larger filter cross section in order to deliver comparable flows in OEM installations and in STCd installations where space allows.

We have seen situations where a clogged paper filter element actually kept a Mooney engine from starting. On one occasion, the stock filter was so bad that just prior to a non-starting incident, the owner complained of sluggish takeoff and climb performance. A new filter fixed the problem.

The trick in filtering engine air has always been balancing flow against enough filtration to catch the dirt and grime that will rapidly turn an engine to junk if its not filtered. More on point, just how efficient must the filter be in a typical aircraft piston engine? After all, aircraft dont generally travel down dusty roads or sit in city traffic. When airborne, they dont need much filtering.

In fact, Mooney pioneered the idea of no filtering at all, except on the ground, with a pilot-controlled switch to eliminate the filtering entirely. This was the ram air feature found in the four-cylinder Lycoming-powered airplanes.

At cruise altitude, a pilot could open the ram air door to gain a half inch or so of additional manifold pressure. A low-restrictive filter does the same thing; it allows more airflow, more manifold pressure and more power.

Generally speaking, once a surface-loading type filter gets fully loaded, its clogged and ceases to function as a filter. While not all manufacturers agree, Rocco says it generally takes much longer to load a depth-loading filter as the creases of the medium itself are significantly deeper than the pressed fibers of a paper filter. And it certainly has more area than the surface of a foam filter.

Foam is popular in severe applications, as its economical to replace once it loads with grit. Interestingly, only Brackett foam filters or the older design Airmaze-screen and flock-filters are approved for seaplanes because natural fiber paper filters restrict too much air when wet.

Summary
We welcome the introduction of a state-of the-art automotive performance manufacturer like K&N Engineering/Challenger to the GA marketplace. These products seem well proven in the performance automotive world and everyone we spoke to had great things to say about them. Several sources we contacted reported performance increases so substantial that they have installed K&N filters on every motorized vehicle they own.

In the automotive and motorcycle field, these filters are considered to be expensive but are washable and re-usable, which gives them some advantage over paper filters in the same applications. However, when it comes to GA, Challengers prices arent far out of line and when you consider the fact theyre rated at a duty cycle of at least five to 10 years and theyre washable as needed or at annual.

The average price for popular single-engine types is in the $150 to $165 range. A complete kit including both a filter and a recharging kit typically sells for $175 to $200. We think the claims of increased horsepower of 3 to 6 percent are realistic, based on Capeharts dyno testing. But well reserve judgment on that until weve had a chance to do some long-term testing.

But ignore the increased power claim and youre still left with a good filter product thats reusable. And we like the fact that when compared to paper, the cotton has a decreased propensity to burn in the event of a backfire.

Worth noting is that in order to realize any horsepower gain, its critical to check that the air boxes fit tightly and are devoid of leaks which are typically the main source of grit entering the engine.