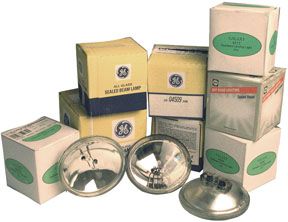 If you fly 150 hours a year and use your landing light for a third of those hours, you spend maybe $50 a year for new lamps. Big deal. But thats not the problem. The problem is that the bulb will fizzle just when you need it most and invariably when youre in too big of a hurry to change it.

Any fool can land an airplane on a darkened runway without much risk. The sweaty palm part is finding the faded yellow taxi line and getting to the ramp without an excursion through the tulies, risking a $10,000 prop strike for the sake of $10 bulb.

So it pays to have a landing/taxi lamp thats both bright and long lasting. But which one? We aimed to find out by endurance testing the popular bulbs in a three-week, marathon 24/7 burning and churning blowout of a box full of expensive bulbs. This yielded some results we didnt exactly expect and also a couple of clear winners which, it turns out, are also the least expensive choices.

We bought several samples of popular 100-watt lamps with the intent of burning them to destruction. We powered these lamps with a typical bus voltage in a 12-volt airplane-and we cooled the bulb continuously with a fan. Because most landing lights are enclosed behind a lens, our set-up kept the lamps cooler than they would be in the airplane, thus actual duration in the airplane may be substantially less.

To track bulb life, we used a datalogging meter with a thermocouple feeding into a laptop computer. This provided both temperature and lifecycle data. Well mention at this juncture that our tests didnt simulate the effects of vibration, which can wreck a bulb in mere hours, especially those mounted in nosebowls or anywhere near the cowling. Wing-mounted bulbs seem to last longer. Vibration is unlikely to extend the life of any bulb so we think our trials are a relatively fair comparison of these products. We dont know if quartz bulbs are more or less sensitive to vibration but our guess is less.

Weve heard all manner of tricks to extend bulb life, including mounting the bulb so the filament is vertical, padding it with a bead of RTV sealant or a gasket made of surgical tubing and even extinguishing the light before touchdown, the theory being that the sharp whack of landing breaks the hot filament. We have no idea if any of these tips are effective, but we did mount the bulbs in our test rig vertically.

By far the commonest landing light bulb is the GE4509 PAR36, which is ubiquitous enough to appear in the merchandise counters of many FBOs. It retails for $9 to as much as $51 on one Web site we found. PAR, by the way, means parabolic aluminized reflector and the 36 designations refers to the shape and angle of the beam, which is a tightly focused spot shape rather the floodlight pattern of a typical automobile headlight.

We bought our test GE 4509s from Aircraft Spruce (www.aircraftspruce.com) for $9.95 which, given Spruces excellent service, is about a good a deal as you can get on GE bulbs.

The 4509 is such a popular lamp-its used as a tractor and off-road bulb-that other manufacturers such as Wagner, Phillips and Galaxy make their own versions.

Some owners shop the local NAPA autoparts store for the Wagner version but were not sure thats a good idea. We have no reservations about whether its an approved part or not-its listed as an “aircraft spot” lamp, so thats good enough for us. However, the NAPA-supplied Wagner 4509 we tested retailed for $13.49 and lasted only 11 hours.

Curiously, thats just how long Wagner says it should last, according to the NAPA specs we reviewed with the local outlet. The GE 4509s life is supposed to be 25 hours, according to catalog specs, but we didnt achieve anything like that in our trials.

There are other brands of 4509s in the market. A Web search yielded several choices including offerings from Phillips, Ushio and Eiko, the latter being specialty lighting companies who evidently find the market for these bulbs large enough to dabble with their own versions.

But good luck actually buying one. A company that claimed to stock both Ushio and Eiko 4509s never returned our queries. Moreover, these bulbs werent great deals on price and with the long-life Q versions available, we dont think theyre worth bothering with.

With some difficulty, for instance, we located Phillips 4509 lamps. These arrived in a box labeled Phillips but on the back, they were stamped “Wagner.” At $8.10 each from www.atlantalightbulbs.com/, these were cheaper than the NAPA Wagners and lasted a little longer, about 17 hours. Thats better than the GE but hardly worth the effort of finding them given the exceptional performance of the least expensive 4509 bulbs we could find.

And those would be the Galaxy 4509s from Aircraft Spruce, at $7.95. The first burned for 33 hours, the second lasted 17 for an average of 25 hours, more than three times as long as the GE and for two bucks less. Even if the 33-hour sample was a fluke and the average life is 15 to 17 hours, their price still makes them a better deal, in our estimation, if you really want an ordinary 4509 lamp. But we think there are better choices in the quartz product line.

Go With Q
GE and other manufacturers sell an upgraded, long-life 4509 bulb called the Q4509, the Q designation being for quartz halogen. This is a direct replacement for the 4509 and has a slightly narrower beam but, according to GE, more candlepower than the 4059, at 140,000 CP versus 110,000 CP, at the same amperage and, according to our trials, the same operating temperatures or perhaps a little less. It appears to be a more efficient bulb.

The Q4509s beam is slightly narrower and more focused than the 4509 but, according to our ramp measurements, not so much narrower as to make a significant difference. But the Q4509 blows away the 4509 in bulb life. Nominally, says GE, its a 100-hour bulb but we burned our test bulb for 125 hours and it was still going strong. Aluminum was beginning to slough off the reflector and the inside of the bulb was hazy, but the bulb continued to burn brightly.

Spruce sells the GE Q4509 for $25.80, while the Galaxy version sells for $19.85. That makes the Q version slam-dunk winners in value-they cost about three times as much as the plain-vanilla 4509s but, in the case of the GE, last more than 10 times as long. That effectively addresses our chief beef about landing lights: We dont mind paying for the bulb, we would just prefer to have it fry less often, invariably at dusk when were in a hurry to get airborne.

We cant see any reason to recommend the plain 4509, but if youre really into cheap, Aircraft Spruces Galaxy 4509 is clearly the better bulb, in our view. The Wagner bulbs from NAPA appear to be no bargains in price and they demonstrated no particular lifespan advantage over the GE. Further, they didnt last as long as the Galaxy 4509 did and they cost more.

The GE Q4509 is the overall winner, with 120-hour plus bulb life.The Galaxy 4509Q from Spruce is a good value, too; $5 cheaper and 72 hours of bulb life. Contact Spruce at www.aircraftspruce.com/.