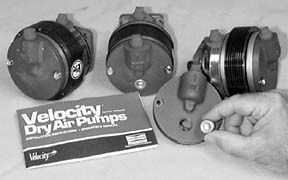 Of less consequence but no less annoying are pumps that suddenly give up the ghost without warning in VFR, creating yet another maintenance headache for the owner.

Pumps can and do fail frequently and almost always unpredictably. Some go 1000 hours without a peep, others give it up 50 hours into a fresh overhaul, begging the question: Cant someone please make a better class of vacuum pump?

Now along comes Champion-the spark plug and oil filter guys-claiming theyve done just that. If claims Champion is making ring true, you may at least have a means of checking the pump for wear and replacing it proactively before it fails.

Wear Ports
Recently introduced but not yet fully flight evaluated by us-or the market, for that matter-is Champion Aviations new line of Velocity Gold dry vacuum pumps with what the company calls Wear Indicator Ports.

According to Champions John Herman, their new line of pumps sport several improvements. These include more efficient internal porting, which allows less restrictive flow of incoming and outgoing air, an advanced bypass rotor and hand lapped internal working tolerances, all of which is supposed to mean less internal heat build-up.

The trump card-at least in Champions promo-is a small inspection port that allows a mechanic to peek at the vanes and, theoretically at least, assess wear. Its simply a small threaded 3/16-inch opening on the rear of the pump housing which has a removable inspection plug.

Peering through the opening with either a mirror or borescope-its too constricted to view directly-a mechanic can perform a visual inspection of the pumps internal condition and thus estimate approximate remaining service life by determining the amount of wear present on the sliding carbon vanes.

The vanes do the heavy lifting inside a vacuum pump; centrifugal force causes them to slide in and out of a slotted rotor and bear against the pumps inner housing or chamber. This action changes the volume of the pump chambers and creates low and high pressure areas, producing a flow through the pump for either vacuum or pressure. Some aircraft, such as Bonanzas, use a pressure system to push air through their gyros rather than sucking air through the lines, as do most GA systems. Of course, the same pump can do either, depending on how its plumbed.

One disadvantage of so-called pressure systems is that when the pump fails, the carbon vanes often go to pieces and some of that dust finds its way through the filters and lines to the gyros. Kiss one expensive air-driven HSI goodnight.

Gold Pump Specs
All six models of the new Velocity Gold pump models (200 series and 400 series) are FAA PMA approved and are engineered for driving gyros and aircraft de-icing and all are available as direct replacements for competitive models. Costs are competitive with current Airborne and Sigma-Tek models, at $538.50 exchange for the 200 series, plus $100 core charge. A heavy duty variant costs $1002.50, plus core. For 400 series pumps, prices are $1445.25, plus $200 for core.

Each pump has been designed with a bypass rotor that Champion says reduces damage from foreign objects and prevents the vanes from sticking. The pumps bipolar pumping action is also supposed to help maintain balanced rotor loading for less wear.

Interestingly, these newly designed pumps also have finned housings that increase the cooling surface area by almost 100 percent. Since heat is believed to be the bane of most pumps, this alone is an improvement.

A Big Deal?
So is the new pump a big deal or so much marketing hype from Champion? In our opinion, it may very well prove to be an improvement over the run-of-the-mill Airborne or Rapco dry pump, whose failures have proven such an annoyance. Up to now, pumps either worked or they didnt. Unlike the engine itself, theres no way to conduct a compression test to check the cylinders or oil analysis to monitor trends. Generally, the vanes wear and go to pieces and/or the shaft-which is designed with a frangible coupling-shears.

So if Champions Wear Port is such a good idea-and we think it is-why didnt someone think of this before? Good question. A&Ps weve talked to say the port will probably prove useful and theyre happy to have some means of inspecting the pumps innards.

Unfortunately, theres no test or field data to support the claim that inspection will accomplish anything. In addition, the mechanic is now confronted with a new challenge: Looking at the vanes through the port, how does he determine what wear level represents a failure threat?

Its too soon to say. Also, the port is located on the back side of the pump which, in some airplanes, is easy to get at while in others, its buried in a jungle of tubing, engine mount hardware and the like. In most installations, will the port be accessible enough to allow a meaningful inspection or will the pump have to be removed? Again, it depends.

We get the impression the other manufacturers wonder why they didnt think of this first and are scrambling to come up with a similar method of inspection. Rapcos former principal, Gary Gaylor, told us the inspection port is a good idea, if it works.

He says the innards of a working pump are typically dirty and filled with black carbon particles that wear off the vanes themselves, thus making visual inspection difficult.

According to Mike Lotzer, national sales manager at Rapco, the inspection hole is more of a gimmick than a useful improvement and in the field, a proper inspection will most likely require removing the pump, a job few owners may authorize. Nonetheless, Rapco is working on their own method for determining pump wear and hints that it wont include a hole in the housing.

The A&Ps weve interviewed tell us that inspection via mirrors and flashlights isnt uncommon in GA and we suspect an enterprising mechanic will be able to devise some means of seeing the vanes. Whether that actually yields meaningful pre-failure information remains to be seen.

Other Pump Players
Like other aspects of GA, the vacuum pump business has only a handful of manufacturers producing new or rebuilt pumps. The prime manufacturer is Airborne followed by Rapco and Sigma-Tek. Champion-a division of automotive component manufacturer giant Federal Mogul-has dominated the aviation spark plug and oil filter business for years. (Its getting some oil filter competition, too.)

Interestingly, as Champion enters the pump market, Airborne is making an exit of sorts. Parker-Hannifins Airborne Division announced that within a few months, theyll no longer supply industry standard 211/215CC series vacuum pumps, except for those aircraft that have approved back-up systems.

These pumps are the mainstay of owner-flown piston singles and used universally on nearly every Piper, Cessna, Beech and Mooney. The larger 400-series pumps are typically found on larger twins and booted aircraft and will continue to be made by Airborne, provided theyre installed on aircraft with back-ups.

Why this sudden exodus? With only three players in the new vacuum pump business, (Airborne, Sigma-Tek and Rapco) and with Airborne considered the OEM market leader, we can only speculate that product liability is the driver.

Airbornes John Hruska told us that the company feels so strongly about this that they published a Service Letter in 1986 which specified that Airborne pumps must be used with a back-up of some kind in any aircraft flown under IFR. Were sure the liability exposure in making pumps is considerable and, given the number of failures, real.

This, of course, raises the question of whether Champions wear port design is a meaningful improvement or something added merely to play well in court should a pump failure lead to an accident.

Frankly, we dont know at this juncture. But were happy to see at least one company address the high rate of vacuum pump failures and well be monitoring these pump installations to see how they perform.

Coy Jacob is an Aviation Consumer contributing editor and owner of the Mod Squad, formerly Mooney Mart in Venice, Florida.