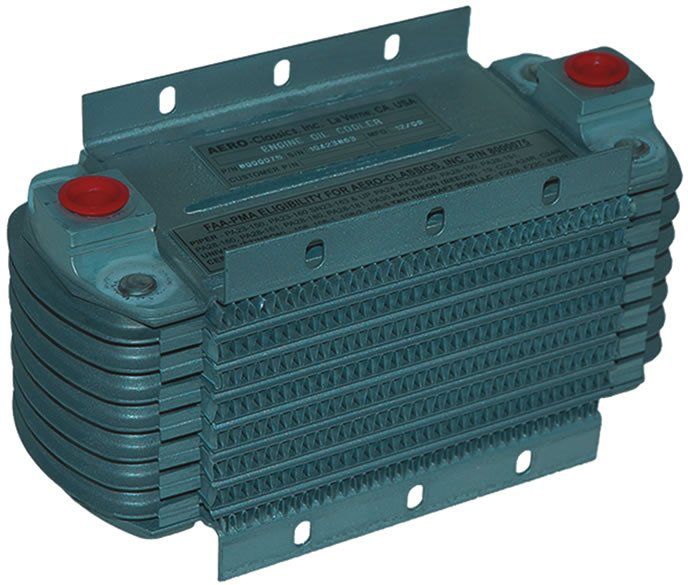 You wouldn’t install a used oil filter on a new or overhauled engine, would you? Of course you wouldn’t, and for the same reason, you shouldn’t reconnect the oil cooler without replacing it, or at least having it properly serviced.

Often one of the most neglected components under the cowling, the oil cooler on your engine could be in desperate need of servicing, even if it’s not begging for attention by dribbling oil on the hangar floor. Luckily, there are relatively inexpensive replacement and overhaul options that might provide insurance against premature engine wear. Let’s have a look.

Many shapes and sizes

On larger Continental engines, the oil cooler is mounted directly to the engine, while Lycoming engines connect to remote coolers. The obvious advantage to the direct-mount Continental design is its lack of external oil transfer hoses, a source of potential leakage. Still, engine-mounted coolers live harder and shorter lives because they sustain more engine vibration than firewall-mounted remote models.

Most specialty shops told us the average lifespan of an engine-mounted cooler can be around 10 to 12 years. Common failure modes include stress cracks and corrosion-induced leakage. Remote coolers can live as long as you, but only if serviced regularly and properly.

A hard failure isn’t the only reason to service or replace a cooler. The other concern is blockage. By nature of its design, the oil cooler makes for an effective secondary filtration system, catching carbon, metal and other engine contaminants. Simple flush-cleaning probably won’t do it much good.

Wayne Thomas at Pacific Oil Cooler Service in La Verne, California (and the sister company of oil cooler manufacturer Aero-Classics) described the time-consuming cleaning process it performs on a cooler during overhaul.

After ultrasonic cleaning, each cooler spends time on three different flushing machines. High volumes of Stoddard solvent flush at high pressure—with reversing direction of flow every 60 seconds—is the key to thoroughly flushing a cooler. The final flushing bench has a 10-micron filter screen that is carefully monitored until the cooler is clean. Coolers are run on each of three flushing benches in two-hour stints.

“We recommend the oil cooler be overhauled once every three or four years, at the end of the engine’s TBO cycle, or any time any major engine work is being performed,” Thomas said. Of course, if the cooler is damaged, replacement might be the only option.

In general, coolers that are mounted on the front of the engine and closer to ram air inlets are more susceptible to air fin damage from debris impact.

When it comes to total replacement, like oil filters, there is hardly a one-size-fits-all solution. Aside from bolt patterns and remote mounting, there are congealing and non-congealing design. A non-congealing cooler has an additional oil input flow hole to allow constant warm engine oil to flow through it at all times, even if the oil cooler vermatherm (thermostat control valve) is in bypass mode at cold oil temperatures.

Consider that oil in a vermathem-equipped engine, oil doesn’t flow to the oil cooler unless it’s at least 160 degrees F. When it does, the couple of quarts of cold, thickened oil trapped in the cooler will be slow to flow out the other side and into the engine, creating a blockage. It might be possible to upgrade to a non-congealing model by replacing the mounting hardware and vermatherm.

There doesn’t seem to be a favorite cooler to install, although shops report that Aero-Classics dominates for FAA-approved replacements for vintage coolers that are no longer available. This includes exact replacements for Stewart Warner, Harrison and others sourced through OEMs. The shop’s main concern is finding a supplier that has a wide variety of coolers in stock and ready to ship. Pacific Oil Cooler Service in La Verne, California, is the name spoken by every shop we spoke with.

“When overhauling a Continental engine—and the cooler being part of the engine—we send the cooler to Pacific Cooler,” said Charlie Melot at Zephyr Aircraft Engines in Zephyrhills, Florida. Melot noted that while a remote cooler on a Lycoming isn’t part of the overhaul, Zephyr still sends it to Pacific for overhaul.

That’s what we wanted to hear. Why invest in an engine overhaul (or major internal engine work) only to connect an oil cooler that’s contaminated with metal and sludge?

As for sourcing a replacement, the oil cooler market is confusing. Aside from Stewart Warner, the Harrison Radiator division of General Motors made a variety of coolers before selling off the tooling and manufacturing rights. Today, the manufacturing of most FAA-approved direct-replacement coolers are by Aero-Classics and Niagara Thermal Products (NDM), distributed by Niagara Air Parts.

Niagara Air Parts says it can’t distribute NDM coolers for Continental engines (NDM sells direct to Continental.) Instead, it reversed engineered its own under Canadian certification, including an STD’d aluminum replacement for the Harrison cooler on Piper Super Cubs.

Niagara’s Ronald Newburg doesn’t believe in oil cooler overhaul. His opinion is that no matter how extensive the cleaning process is, you simply can’t wash all of the contaminants from its nooks and crannys. For that reason, his company only sells new replacements. Niagara has a wharehouse in Niagara Falls, New York, and takes pride in having a lot of stock ready for quick shipping.

Based on our research, they’ll select an oil cooler based on its easy replacement. While there are huge variations in fit, Aero-Classics, MDN and Niagara are the preferred choices. Expect to pay several hours’ of labor for replacement.

If you decide to have the oil cooler serviced instead of replaced, we think Pacific Oil Cooler’s extensive overhaul/cleaning process is better than an ineffective flushing—and much better than doing nothing at all.