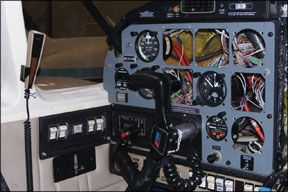 Despite the hoopla that has surrounded modern glass cockpits, round dial steam gauge instruments still represent the majority of the fleet. Plus, theyre still required for backing up glass panels. Eventually, the costly prospect of dealing with failed flight instruments must be addressed. The common question is this: Should the instrument be repaired or simply replaced with a new or newly overhauled unit?

The short answer is that it depends on the instrument’s vintage, its complexity and what you expect for its longevity. There are a few factors that should help make the decision: your expectations for aesthetics, the shop’s warranty period and whether the instrument is primary and critical or used as a backup. Consider that

primary instruments could be worth your life. Heres a look at some of the tricky details that come into play when instruments need service. Be forewarned that quality repairs wont come cheaply.

Overhaul is a Relative Term

The old saw of getting what you pay for certainly applies to instrument work. In fact, if an instrument repair or replacement cost seems excessively low, quality is likely being sacrificed somewhere in the process. For once, the FAA can actually be accused of offering a level of leniency when it comes to instrument overhaul-at least according to practice versus manufacturers definition.

A shop can legally represent an instrument as overhauled (abbreviated OHC for “overhauled condition”) even if none of the internal components are actually replaced. One shop told us that a simple inspection of the instrument’s internal components might be enough to stamp the instrument as overhauled. But when it comes to satisfying the criteria spelled out in a given instrument’s maintenance and overhaul manual, this practice wont cut the mustard.

A true instrument overhaul should include removing and replacing major components, including bearings, gimbals, rotors and gaskets. Quality work often includes reworking the instrument’s faded face and markings, repainting the case and even replacing the bezel glass. Were talking a true teardown and rebuild here. A quality overhaul should be as good as a new instrument. True overhauls deserve and often carry a full-year warranty, which is the same as most factory-new instruments. Basic repairs to an instrument wont come close to this standard.

When talking budget instrument overhauls, owners might not understand that theyre getting a basic repair thats being represented as an overhaul. Low overhaul pricing is tempting and sometimes it works out in the customer’s favor. Other times its a set-up for hassle. Even a quality overhaul with a high price tag might cause some grief as some gyros are just picky and not all techs are perfect every day. Premature failures can also come from worn instrument panel shock mounts, misadjusted vacuum regulators or contaminated vacuum lines and be no fault of the overhauler.

Its how the shop handles the rework that separates a good instrument shop from a bad one, so our advice is to establish a relationship with reputable, well-established instrument facilities that have large inventories on hand. You pay a premium for this but its worth it when they have a loaner unit to eliminate down time or quickly send a replacement.

Some instruments are too far out of production or parts are simply not available to do a true overhaul. Some instruments just arent worthy of exchange. For ancient models, shops wont have a healthy supply of workable core units in their pool to rebuild, so repairing your unit is the only thing they can do. For the repair, most shops structure pricing on a parts and labor basis, based on what it takes to repair the instrument to a level where they can sign it off.

If you own an instrument that falls in this category, consider a modern replacement. Youll pay more on the front end, since you wont have a worthy unit to turn in on exchange, but youll be ready for a quick exchange or a zero-time overhaul in the future. Repairing existing instruments also means downtime. If your attitude gyro was the only one in the airplane, youre stuck flying VFR. Take out an airspeed indicator or altimeter and youre grounded.

Labor costs can sink the idea of a repair. An extensive repair can tally an invoice close to what an overhaul or exchange can run. If you want to continue flying the aircraft while the unit is out, youll pay twice for disassembly and reassembly. In many cases, warranty on a repair covers the specific parts and labor on the repair rather than the entire instrument. The last thing you want is to dump a grand into the meter movements of your Century NSD360A vacuum-driven HSI, only to have the gyro fail a month later-and require an overhaul. Make sure the shop helps you weigh the cost and benefits of repair vs. finding a new unit to do the job.

When autopilots act up, most owners fail to realize that an attitude gyro, flight director or turn coordinator could be the culprit. While a gyro might appear to be completely healthy-spinning up, remaining erect and accurately depicting changes in pitch and roll-its electrical outputs could be causing autopilot problems. Gyro-induced autopilot problems include pitch oscillation, pitch porpoise and wing rocking. The Bendix/King KI256 Flight Director, Century 52D66 horizon gyros and some Cessna/Sperry horizons are known culprits here.

This situation can get ugly. The King KI255 is a 1970s-vintage Flight Director gyro used with early King KFC200 autopilot systems. When this gyro tanks, its worth nothing on an exchange because a zero-time replacements almost dont exist and the chances of returning the core to a serviceable condition are slim. If you cant find a shop willing and able to repair it, you can upgrade to the current Honeywell KI256. This will set you back an astonishing $14,000 for a factory-new unit. This gyro is popular with the KFC200, KFC150 and KFC225 autopilots and is a popular choice for adding Flight Director to some S-TEC autopilots. If you have a KI256 in need of repair, sending it out for a factory repair is $4700. For an exchange or for a zero-time overhauled replacement, shops charge upwards of $3700, as long as the core unit coming back is above serial number 10,700. For lower serial numbers, a repair attempt might be the only option.

Gyro instruments dont always live on the instrument panel. The Bendix/King KCS55A uses a remote-slaved, electric heading gyro, such as the KG102A, thats usually mounted in the aircrafts tail section (or up in the nose of twins). A spent KG102A can be responsible for heading errors and slaving problems, as well as hefty overhaul or repair costs. For exchange, a KG102A will set you back well north of three grand. In this case, a repair attempt is usually a good plan before resorting to an overhaul.

What were getting at here is that you and your shop should nail the repair or exchange costs associated with complex instruments like these before tearing into the job. More than one owner has been surprised by the impressive costs that autopilot gyros can accumulate. A basic repair that might cure a porpoising

autopilot could run a couple thousand dollars. Sadly, some shops might suspect that a gyro is the culprit of an autopilot failure and send the gyro to an instrument shop for evaluation. The teardown reveals a gyro needing an overhaul but it doesnt cure the autopilot problem once reinstalled. The repair bill snowballs.

Static instruments such as VSIs and altimeters should be exchanged or completely overhauled. Large amounts of altimeter or airspeed error could kill you. Static system leakage is often associated with these instruments, due to dry and brittle gaskets that have been in the aircraft since the factory assembly line. Replacement airspeed indicators must have the correct silk-screened range markings on the face of the indicator, so the shop sends the page from the aircraft flight manual off to get the right replacement.

The key to the overhaul or replacement question here is the warranty and price spread. You can expect to pay about $800 for a new United Instruments 8100-series True Airspeed, on an exchange basis. Reworking yours could likely save roughly $150 but youll have more down time. Mid Continents 1394T100-7Z is a common, electric turn coordinator and costs around $600 to overhaul. An exchange for a factory-new replacement runs $800. Since Mid Continent manufactures and overhauls these units and the overhaul has the same warranty as the new unit, our money would go toward an overhaul. Keep in mind that factory-new prices are quoted assuming you have an exact core to turn in. If you dont, then overhaul with a core exchange or repair are your options. Good shops will explain your options.

Dont underestimate freight costs. Instruments must be shipped in large boxes which are commonly hit with a dimensional weight pricing structure. Requesting priority shipping can add hundreds of dollars in freight charges.

With instrument work, its all about the quality. Beware something that looks too good to be true. For example, an unscrupulous shop might offer you a screaming deal on an exchange on your Sigma Tek AI, but the unit they send you back is an RC Allen-essentially a downgrade for you and a great core for the shop to rebuild and resell.

One annoyed owner told us the story of his initially-cheap attitude gyro repair gone sour. He brought the airplane back to the mom and pop instrument shop three times in less than a year to have the gyro reworked. After scratches on his instrument panel and a broken post lamp-war wounds from countless removals and reinstallations -he asked for his money back and ordered an exchange from a quality instrument facility. The $200 premium for the quality work looked cheap in retrospect. Lesson learned.

When its time to address ailing instruments, its important to know what you get for the money. A quality overhaul or exchange often wont cost much more than the shoddiest repair attempt. This isnt to say that repair options should be ruled out entirely. Youll just need to accept the fact that even with a quality repair you could be faced with the same instrument failure dilemma in short order. Who has the time for that?