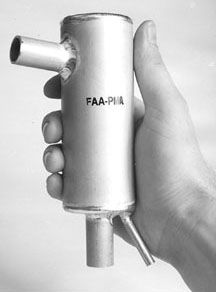 If theres another job as thankless as degreasing the belly of an airplane, it doesnt come immediately to mind.

Some of that grunge finds its way onto the belly via engine oil leaks-major and minor-and the rest spews out of the crankcase breather line and the exhaust pipe. The breather, of course, is the culprit.

Over the years, various devices to staunch the flow of oil mist have been tried. These so-called air/oil separators purport to scavenge the oil vapor and dump it back in the crankcase instead of overboard, where it condenses on the belly.

The latest of these gadgets comes from M-20 Oil Separators, the same company that developed a turbo-normalizing system for the Mooney M20 series. (See Aviation Consumer, April, 1999)

Simple Condenser…Sort Of
Theres nothing mysterious or sophisticated about what an air/oil separator does. Its basically a condenser. The output of the engines breather line is piped into one end of whats essentially a metal canister. In M-20 case, the guts of the device are a bit more complex, consisting of a series of internal tubes and a weir to catch and route liquid back to the crankcase.Once the breather output-which is a mixture of oil mist, warm air and water vapor-is inside the canister, its able to cool and condense. The warm air then exits the canister and is dumped overboard, theoretically free of oil. The condensed oil is drained from the canister and piped back into the engine via the nearest convenient oil line.

The benefits? Several. First, the aircraft belly stays cleaner, since the oil goes back into the engine, not overboard. Second, the engine sump can be operated at a higher oil level, which theoretically improves lubrication and cooling. Last, oil consumption may be reduced. To see if the M-20 Air/Oil Separator delivers on these claims, we installed one in our Mooney and flew it during a six-month, 120-hour trial.

Installation
The separator is nicely made of welded aluminum with stout inlets and outlets. At $259, the kit includes the separator itself, instructions and the STC paperwork. As of summer 2000, a vast number of engines and airframes (about 800) were covered. Contact M-20 directly for information on your model.

The separator is small enough to be installed just about anywhere but it does have to be perfectly plumb to drain properly and it cant be below the level of the oil line its draining into. Furthermore, drain line routing is quite sensitive and it cant have flat spots where the return oil can collect.

Two things we didnt like about this kit: It recommends mounting via a lash-up of tie wraps and the oil return line is supposed to be welded into an existing rocker oil return line in the Mooney installation. The tie wrap mount works well enough but we would prefer something more secure, such as a clamp or bracket. These can be fashioned during installation.

As for the welded return line, we think that invites a cracked and leaking oil line so we had our shop install a t-fitting in the return line. Total installation time required: In our case, three hours and $178.50.

Performance
With a freshly scrubbed and waxed belly, we flew the airplane for 10 hours before taking a creeper tour of airplanes nether regions. When we did, we were shocked to see the usual layer of oily scum.

Further investigation revealed indeterminate oil leakage from the engine accessory case, some of which was coming from the prop governor. Another visit to the shop and $550 later, the leak was repaired and were ready for a second trial.

We would call the results mixed at best. Although the underside of the airplane was cleaner, we still noted a slight haze of condensed oil from the breather pipe.

M-20s Bill Sandman told us the air/oil separator should yield a bone-dry breather line and no oil on the belly. M-20 claims the sump can be topped off without blowing down to its normal ullage. In our case, thats eight quarts, but we found that when topped off, the engine would still blow down to its normal six quarts and remain at that level for four to six hours before needing makeup oil. It did seem to hold the higher oil level for longer, however.

However, another Mooney owner we spoke with had a much better experience with his late- model MSE. He reported a dramatic improvement in belly cleanliness and hes able to keep the engine crankcase topped with oil; oil consumption is about one quart per 25 hours. (His engine has fewer than half the hours that ours does.)

Although M-20 claims some 3000 units are in the field with good results, Sandman also notes that results may vary engine to engine that excessive blowby from worn rings may also yield poor performance.

Which leads to the question of why top the crankcase in the first place. M-20 says additional oil improves cooling but when we contacted Lycoming to ask about this, the company says no data exists to support the theory. Just to check the claim, we conducted two oil cooling tests, one in our Mooney 201 and a second in a turbocharged TSIO-360-powered 231.

In the first test, we drained our sump to four quarts-as little oil as we care to fly with-then flew a series of touch and goes, plus climbs and cruises, noting the oil sump temperature with a digital probe. Next, we doubled the oil amount-adding to a full eight quarts-and repeated the profile under the same ambient temperature conditions.

Results: With four quarts, the maximum oil temperature was 170.2 degrees F; with eight quarts, it was 167.5 degrees F, an insignificant difference in terms of overall engine cooling. A repeat of this test in the 231 yielded virtually identical results, but with higher overall temperatures for both low and high oil levels, probably by dint of turbocharging. Although M-20 has no data to support the cooling claims, Sandman believes it will be most noticeable in extreme conditions, such as desert heat or high altitude, where cooling efficiency drops.

M-20s View
We also asked about another concern raised by Lycoming and several owners contemplating an air/oil separator. If the separator is condensing oil vapor and dumping it back into the sump, isnt it also dumping water and the associated acids developed during the combustion process?

Yes, says Sandman, it is, since theres no way to separate oil and water vapor being returned to the crankcase. No testing was done by M-20 to measure potential moisture concentration. To check this, we had our oil analysis expert, Howard Fenton, check for both moisture content and Ph in a 25-hour sample with the air/oil separator installed. He found zero moisture and a Ph of 4, an acidity level equivalent to beer, which he sees as not worrisome with regard to corrosion. Frequent oil changes should address it.

However, our aircraft is flown frequently and oil temperatures run in the 170 to 180-degree range, during the summer. Lycoming says-and we agree-that there may be some risk of increasing the oil moisture content in smaller engines that tend not to heat the oil thoroughly.

This could be especially troublesome for engines not flown frequently in cool or cold climates. Its unlikely to be an issue in turbocharged or large-displacement engines, whose oil temperatures tend to be higher.

Conclusion
Should you rush out and buy an air/oil separator? Our view is that its performance may be dependent not just on engine type but individual engines. Evidently, most owners have enjoyed dramatic results, even though we did not. (We plan to tweak the oil return line routing to eliminate any potential flat spots.)

Worth noting is that even if the breather exhaust is cleaned up, engine oil leaks may still trash the belly. It may take some expensive effort to dry up even minor leaks.

Apart from the clean belly issue, we dont think an air/oil separator is a must-have accessory. The claim that tankering additional oil improves cooling is unsupported and thus of no advantage, except perhaps on extremely long flights where adding oil isnt an option or isnt convenient. We could be swayed on that if anyone could produce valid data.

The moisture issue is an unknown but our experience suggests its not much of a risk if the engine is flown frequently for long periods at oil temperatures of at least 180 degrees. Most turbocharged engines will heat the oil to at least that temperature. For smaller or infrequently flown engines-especially during the winter-the moisture problem could be real, thus we think the oil should be watched carefully for water and changed frequently.