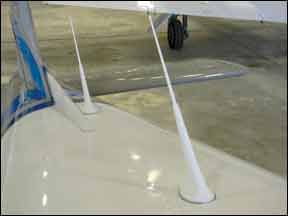 Geeks to the core, we’ve always had an odd fascination with aircraft antennas. Maybe it’s our ham radio background or the fact that airborne antennas are a critical means of communicating, navigating and reporting our position to the ground. Truth is the average pilot rarely gives these critical antenna systems—fondly slanged “antlers” around the shop— a second thought. That’s until the avionics shop suggests a high-cost replacement option or they’ve deteriorated to the point of creating a system failure.

Antenna work can be an expensive endeavor while fabric and composite aircraft could make the invoice even more shocking. Here’s an insider’s look at antenna maintenance, tips for upgrading ancient ones and some of the symptoms associated with deficient antennas.

Tough Life
Antennas live hard lives hanging out in the slipstream and braving the elements. The ones mounted on the bottom of the airframe get addi-tional abuse from exhaust stack grime and vented engine oil. Getting on your back and degreasing these antennas isn’t any pilot’s idea of a good time, so it rarely happens. Still, it’s a critical step in increasing the lifespan of antennas. It’s a dirty job but someone needs to do it.

The other problem associated with antenna neglect is the potential for airframe corrosion. As the seal between the antenna’s base and the skin of the aircraft breaks down, it’s easy for moisture to work its way between the antenna and skin. Before long, corrosion sets in and we all know that’s a bad thing. We’re finding that removing some antennas to clean the bond between the base and the skin is a worthwhile effort to head off corrosion and to increase performance.

Many new fiberglass antennas are treated with an anti-static coating. This invisible topcoat helps prevent static build up, but it eventually wears off and you might notice the annoying static in the comm radio reception when you fly in certain weather conditions.

You’ll know when an antenna has reached the end of its life when the fiberglass’ coating wears off, revealing an brownish core and perhaps sizeable cracks and peeling in the fiberglass itself. A symptom common to worn comm antennas is scratchy background noise in the radio receiver. Transmit and receive range performance might suffer as well.

An expensive issue that’s common to aged aircraft is antenna signal cable replacement. In many cases, the cabling that attaches the antenna to the radio could be as old as the aircraft and subject to deterioration and wear from years of rattling around. Consider, too, that old coaxial cable is likely non-shielded RG58 (or older) and could be the source of interfering noise that’s worked its way into your radios and audio system.

The standard practice these days is to install twin-shielded, low-loss cabling. But cable replacement often requires sizeable teardown of interior components—a chore that’s certain to increase the invoice. Still, you’ll need to understand that this cabling is half of the antenna system. Replacing just the antenna might solve half of the problem. When at all possible, replace the cable and the antenna at the same time.

Some installation may require your installer to relocate antennas to respect interference issues. This is common with active traffic systems and for the remote sensor module (RSM) that’s part of the Aspen PFD system. Use this as an opportunity to do some antenna upgrading, as the labor you’re doing anyway is such a large part of antenna work cost.

Comm, Nav and WAAS
Contrary to common belief, three items are separate antenna systems. Each comm radio in the aircraft has a dedicated comm antenna. While it is possible for two radios to share a single antenna through a splitter, this is a rare and expensive interface. With the exception of the Beechcraft Flying-V antennas, navigation antennas have nothing to do with communication antennas.

Comm antennas come in different varieties including an inexpensive metal rod whip design to pricey, high-speed, fiberglass models appropriate for turboprops and jets. A proven and popular design for replacing older Cessna OEM applications is the CI121-series antenna made by veteran antenna manufacturer Comant Industries. This is the fiberglass whip antenna you’ll see mounted on top of the fuselage of single-engine Cessna models.

For the underbelly mount, it’s the CI122. This is a bent-whip antenna with fiberglass base and metal rod element. Expect an invoice of around $800-900 for such replacement, including labor. (Newer Cessnas use similar antennas but with a noticeably fatter and beefier base that retains the classic top of cabin mounting.)

For replacing original equipment comm antennas on Piper models, antenna maker ITT Corp. offers the DM C70-series antennas. These are staggered on the back of the fuselage and maintain a handsome and stock appearance. The replacement  cost about the same as the Cessna.

It’s common for a single navigational antenna to feed both nav radios in the aircraft through a coaxial splitter. The antenna might be a ‘whisker’-type dipole antenna or heavy-duty blade set (see sidebar for more on this upgrade). Nav antennas live especially tough lives since their often installed at the top of the vertical tail in a fairing where they build corrosion. Once these antenna deteriorate you’ll notice decreased nav radio sensitivity and the ability to receive a VOR station from a sizeable distance.

Replacement nav dipoles come in all metal or fiberglass coated models and installation effort is often complex when it requires accessing the top of the tail. Ever see that small V design antenna that sits aft of the windshield on some Piper models? That’s a glideslope antenna that can be eliminated by going with a dipole tuned for glideslope.

If you haven’t yet upgraded your legacy Garmin GNS430 or 530 (or G1000) to WAAS you’ll need to pay your shop for antenna installation effort. This can either be minimal or a major blow to your checkbook. While a new WAAS antenna comes with the factory upgrade of the GPS unit the shop still needs to access the old GA56 antenna, change the RF connector and install the new antenna. If the old cables aren’t twin-shield, low-loss cable, then that needs to change as well.

Performing a WAAS upgrade to the Garmin GNS units in Cirrus could require additional fiberglass work, although some installers are working around this with alternate mounting locations. Still, the antenna placement for WAAS units is critical and a shortchanged installation could yield performance issues that might degrade the WAAS signal when you need it the most.

The good thing about making the transition from a legacy GNS to WAAS GNS is that the GA35 antenna drops in the same mounting holes as the old GA56. Shops leave their cutting tools in the drawer for the project, although the WAAS antenna has a slightly larger footprint.

L-Band Antennas
Transponders and DME are often referred to as pulse systems. The two systems operate within the same frequency band, so they use the same style (but separate) antennas. You have two options here: the lower-performance and somewhat fragile rod-and-ball antenna, or a more durable and higher-performing fiberglass blade. You want to keep a good eye on these antennas because they’re out of sight on the dirty belly of the aircraft.

As with any underbelly antenna, they are easily contaminated with grease and oil. For some that were installed too close to an exhaust stack, they might even melt. Classic is the rod and ball antenna that gets wacked with a washing brush by an unsuspecting line guy—breaking it off the airframe. Suddenly your transponder or DME is inoperative. It pays to remind these folks to be extra careful during belly degreasing and incorporate an antenna check during preflight walk-around.

Unless the antenna is in remarkable condition, we think it’s a wise idea to replace the transponder antenna when upgrading to a new transponder. Deteriorated transponder antennas (included cabling) contribute to unreliable transponder performance. Frequency drift and power output problems are common symptoms for aged antennas. You can often tell a lot about the unit’s health by eyeballing the antenna. Plan on spending around $400 for a decent blade antenna installation plus whatever labor it takes to run new cabling.

Some traffic systems like the Avidyne TAS, Garmin GTS and Honeywell KTA-series use top and bottom L-Band antennas including one directional twin-blade antenna. Don’t be surprised if your shop needs to do some serious antenna shuffling to make these systems work properly without interference.

Conclusion
Aside from system performance antenna upgrades benefit cosmetics, convenience and perceived speed. A fresh paint job will make old ratty antennas stand out like a sore thumb. If you’ve had a new paint job recently, will they match the paint? Speaking of paint, make sure your paint shop doesn’t paint your antennas. While this sounds trivial, it does happen at sloppy paint shops and it’s an easy way to trash a pricey antenna.

When venturing on a major avionics project, don’t assume your shop will replace the antennas although good shops will make recommendations based on their condition. Ask your shop if they plan to remove the antennas associated with removed systems, and if they will do the associated skin patch work. Cleaning up drag-inducing antennas from the top of a cabin makes dealing with a cabin cover easier.

Lastly, don’t underestimate the costs associated with quality antenna work. The performance of all those critical and eye-catching avionics counts on this major system—which doesn’t get nearly the respect it deserves.