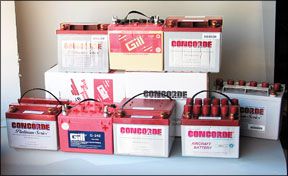 ear some owners tell it, buying an aircraft battery is like playing the lottery: You buy your ticket, cross your fingers and wait around to see what happens. Some owners-those lucky enough to get five years out of a battery-ask whats the big deal? But the poor sap who buys two batteries in as many years has a more cynical view. Is this any way to run an industry? Were not sure, but our tests and owner surveys reveal a wide disparity-not to mention a vein of customer ire-in battery performance and longevity. In this article, well examine aircraft battery options to make sense of it all. Upfront, well say that the smart money rides on

sealed battery designs from Concorde, with flooded models from Concorde as second choice and Gill flooded products a close third.

The quintessential old-fashioned battery with its need for cleaning, maintenance and periodic addition of distilled water, is called a flooded cell. This battery type has the potential to leak corrosive acid or vent corrosive fumes, hence the battery box should be carefully maintained. A flooded battery is also more prone to vibration damage than a sealed battery. A flooded battery loses 1 to 1.5 percent of its charge per day sitting in your airplane when not on a trickle charger.

A flooded batterys main strength is that it has slightly greater resistance to excess charging abuse compared to a sealed battery. Liquid electrolyte driven off by excessive charging can be replaced, within limits. A flooded cell is also less sensitive to cheap battery chargers, as long as they dont output more than 4 amps or so.

If a flooded battery is put into initial service without bench charging, allowing the airplanes charging system to bring it up, it will suffer reduced capacity and shortened life. A sealed battery arrives charged, but should be fully charged on the bench, too. In fact, Gill sealed batteries have a “charge-before-use” sticker on them.

Current state of the art for aircraft batteries is the so-called sealed battery, also known as a valve-regulated lead acid battery (VRLA) or an absorbed glass mat (AGM) battery. This refers to the design of the internal active and plate insulating materials. Since theres no liquid inside, these batteries can be installed on their sides or upside down, which they may very well be in a homebuilt. Some aircraft

are authorized to use only a sealed battery because of location in the airframe. Some dual battery installations use both a sealed and a flooded battery, capitalizing on the benefits of each. Check the airplanes documentation for battery requirements-they may vary considerably. Some sealed batteries arent AGMs, but not in certified aviation batteries. Such batteries are sometimes called dry cells, a term that Odyssey battery seems to fancy. Odyssey is a brand popular among homebuilders, but approved only for a few certified airplanes. The term “dry cell” is a misnomer, in that these batteries are saturated with liquid electrolyte, but not enough to spill if the top was forced open. The electrolyte is absorbed into the internal matrix-sort of the way a sponge holds water, but tighter.

Sealed batteries perform best when a proper bench charger is initially and periodically used, such as the aviation models from VDC Electronics, which have a multistage charging profile thats voltage optimized for aviation AGMs or flooded cells.

Periodic bench charging is not a requirement with either flooded or sealed batteries, but it has been empirically shown that such charging is beneficial to maintaining a battery in peak condition for any battery in an airplane thats not flown frequently. An AGM will out-gas if charged excessively, say over 14.9 volts and several amps

for an extended period in a 12-volt system. That means your charging system must be up to par and properly controlled to get reasonable life from these batteries. Once they out-gas, theyre permanently damaged. (In recent torture testing of batteries, we used 15.2 volts for several hours and damaged a Gill sealed battery, reducing its capacity. However, a Concorde similarly treated suffered no ill effects.)

Concorde recommends a charging system of at least 35 amps for use with their sealed batteries because an AGM can cause a smaller charging system to run hot by accepting a charge faster than the alternator can deliver it.

The big upside to an AGM battery is faster recharge. Theres almost no limit to recharge current from any charging system, so they fully recharge shortly after the airplane is in cruise as long as it has a healthy charging system. An AGM also provides more starting current on a size-for-size basis for better starts. Thats because it has less internal resistance than a flooded battery of similar capacity. Further, AGM batteries perform significantly better than flooded models in cold temperatures and are much more resistant to loss of charge. Again, this is primarily due to low internal resistance. Before discussing our specific tests, a word about battery capacity tests. These are required periodically to assure that an aircraft battery is airworthy which, as defined by the FAA, means the battery must last at least 30 minutes in an emergency avionics configuration with the charging system inoperative. This is one of the most ignored requirements in general aviation because many shops dont have, nor do they want to invest in, the equipment for capacity testing.

The test parameters are found in the instructions for continuing airworthiness (ICA) the FAA requires the battery makers to provide. These ICAs have been included with new batteries for the past seven years. For simplicity, Kelly Aerospace and now Hitec have developed dedicated, automatic capacity testers. Concorde and Gill sell the Kelly-made model under their own brand names for about $950. (Concorde loaned us one for our testing.)

The capacity test can use any empirical method as long as the numerical parameters are met. The dedicated tester is a push-button, walkaway design with the capacity percentage displayed after the tester automatically shuts down at the proper cutoff voltage.

Worth noting here is that for us, battery testing is not a one-shot deal. We maintain a battery of batteries for long-term tests of various kinds, including overcharge abuse testing. For this round of trials, the models we tested are described in the chart. We obtained through normal supply channels four Concorde models (two 12-volt and two 24-volt) and one each 12- and 24-volt Gills. We bought the Gill batteries while Concorde allowed us to obtain their products through suppliers for credit. Concorde also loaned us a capacity tester.

We test verified the manufacturers amp-hour ratings after they were conditioned with several charge/discharge cycles. We then conducted the FAA charge/discharge capacity tests four times and averaged the results.

A new battery should have a capacity of about 100 percent. The Gills started over 100 percent, but gravitated to 100 percent or a little less with each discharge cycle. (The Concordes actually got better each time and the Gills just a little worse.) By the third test cycle, results were at 95 to 102 percent for all. The Concordes had less variation and incrementally improved, which is desirable. The Concordes we tested had greater amp-hour capacity than the equivalent Gills. The Gill G25S, for instance, is 18 amp-hours while at the same price and for the same application, the Concorde RG25 has 22 amp-hours. The more amp-hours the better,

since it means greater starting and emergency capacity.

We put an overzealous charger to good use to intentionally abuse each of the 12-volt Concorde and Gill sealed batteries. The Black and Decker multi-stage charger has a cutoff voltage thats too high (15.2 volts) and a float thats also too high, at 13.5 volts.

This high charge voltage is OK for a rare equalization session to shock a weak flooded deep-cycle battery back to its previous capacity, but if used on a regular basis, it does the opposite by causing plate damage. It will diminish capacity each time its used depending on the duration of charge, current and condition of the battery. If its used on a sealed battery, the damage is permanent. Outgassing from excess voltage is not reversible in a sealed battery.

We tortured a Gill G25S sealed battery with two recharges from deep discharge tests up to 15.2 volts. The two sessions took about 6 percent in capacity loss over the baseline average from the three previous capacity tests. The Concorde RG25 got the same treatment, but only continued to improve. It was obviously more tolerant of this abuse.

We also tested our two 28-month-old Concordes capacities following a regimen of benign neglect of charging them only every six months. (The two Gills we had obtained at the same time had died at 12 and 24 months.) The Concorde RG35 made 72 percent on the first try and an astounding 96 percent after one 24-hour desulfation with a prototype industrial desulfator made by Hitec and sold through Wilco (316-943-9379) for about $950.

We tried a cheaper desulfation approach on the old Concorde CB35 using the unique “equalization” mode of the Black and Decker charger. It actually reduced capacity 5 percent and made a mess of expelled electrolyte in the process. Not recommended except as a desperation measure for your lawn tractor battery. Chargers equipped with built-in desulfators have yet to prove themselves to us.

If you want to stick with a flooded battery, have a Gill as the original equipment and if youre satisfied, stay with it, especially if its a 12-volt. These batteries perform well and the warranty is longer than Concordes. If you retain the original battery, technically, no capacity test is required. But we recommend doing one anyway; its cheap insurance against a failure.

Both our long- and short-term tests have shown the Concordes to be a better battery, flooded or sealed. They have greater amp-hour ratings than the equivalent Gill and at competitive prices. Concordes sealed technology is superior, according to our testing. And even our long-term test CB35 flooded battery had off-the-shelf performance of 87 percent capacity after 28 months of neglect.

One obvious workaround to the annual capacity test is the sealed Concorde, which is so robust that the manufacturer allows it to go two full years initially with no capacity test needed. Then test once a year thereafter, so you can go at least three years with only one test. In our view, this puts the Concorde sealed battery into the slam-dunk category as the best choice and the best value.

We attempted to contact Gill via fax and e-mail with technical questions several times during our testing program, but the company was unresponsive on the specific issues we raised, replying that it doesnt discuss technical details. We did point out some shortcomings in their technical documentation, however, which Gill did respond to and said they would correct. But overall, we wish Gill were as responsive as Concorde, which buried us in technical data.

Light Plane Maintenance, which has extensive coverage in its January 2008 issue, including a 60-second ramp capacity check anyone can perform.

Kim Santerre is editor of