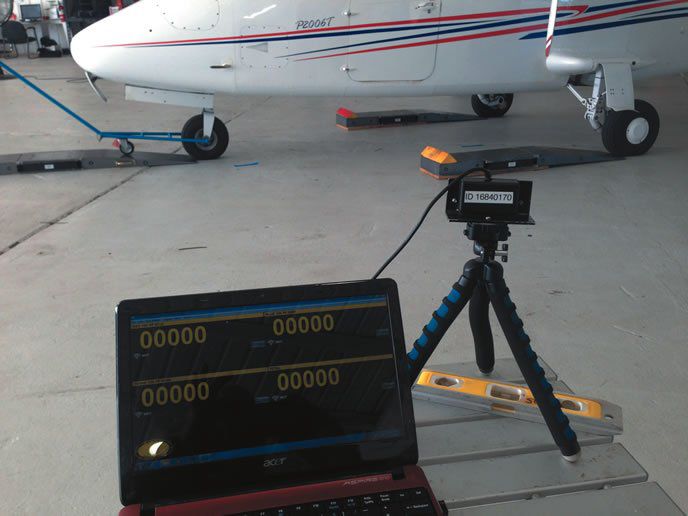 Unless your aircraft has never been modified, there is a good chance there are at least some discrepancies in its weight and balance data.

I learned that firsthand when I worked as an avionics tech, discovering equipment that was installed and removed from some aircraft without being documented. Computing a new report for these aircraft was pointless. After all, you need to start a revision with accurate basic empty weight and reference datum figures. In many cases, the only way to do that is to have the aircraft weighed.

Specialty Service
While a competent mechanic can handle the task of weighing an aircraft, many shops cant justify the purchase and calibration costs of the scales. The shops I spoke with admitted that its easier for them to subcontract the work, or send the owner to have it accomplished.

While aircraft weighing is speciality work, the process is easier than you might think if you find the right shop. That includes using a weighing service that has certified and calibrated scales that are designed specifically for weighing aircraft.

Sal Capra at On-Site Weight and Balance in Lakeland, Florida, told me his operation is equipped with a wide variety of scales to accommodate anything from a Piper Champ to a Boeing jetliner.

On-Site will even travel to maintenance shops or private hangars to do the weighing. Capra said the weighing process often reveals errors in CG data, rather than errors in empty weight, although he noted that many aircraft dont weigh what its owner thinks it does. This is usually the result of mathematical errors made during manual revisions to the data. Using the wrong scales wont help.

No one set of scales is appropriate for all aircraft. It could require an investment of $35,000 for the modern equipment thats needed to weigh a variety of aircraft, Capra said.

The equipment generally consists of multiple scales with wireless transmitters and can include a combination of sensors, including jack stand load cells and platform scales.

On average, expect to pay around $250-$300 for a single-engine piston, $350-$400 for a piston twin and close to $1000 or more to weigh a turboprop or small jet. The process generally takes a couple of hours, including the final paperwork.

Curtiss Cable weighs aircraft at Foothill Aircraft in Upland, California, and warns that retrofits signed off with the statement negligible change to weight and balance should be suspect because thats rarely the case. I agree. Some technicians follow the under-one-pound rule; if the removed or installed equipment is less than one pound, they might not compute a new weight and balance report. For that reason, many aircraft gain weight over time.

Whether its a paint job that didnt include a complete strip of the old paint, or avionics that were installed or removed without factoring the weight of wire and hardware, one pound here and there can add up.

Speaking of adding it up, expect to empty the aircraft of everything thats not on the original type certificate before having it weighed. Some shops might top off the fuel tanks before weighing it and subtract the weight of the fuel from the report. If the airplane is turbine powered, it will have to be defueled because the density of jet fuel changes with temperature.

In the end, the effort and cost of weighing the aircraft will be worth knowing you have accurate data.