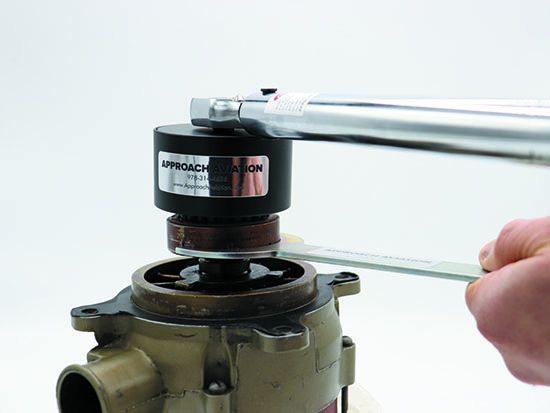 The coupling provides a shear point—protecting the engine from damage should the alternator fail.  However, it’s not perfect and it’s imperative that the coupling be installed properly and inspected every 500 hours or any time the alternator is removed from the aircraft. This critical component has been the subject of several Service Bulletins (SBs) and Special Airworthiness Information Bulletins (SAIBs) because an out-of-tolerance or improperly installed coupling can lead to catastrophic engine failure. Some shops don’t have the tools to do it right, and misdiagnosis of coupling slippage is a common trap.

The $240 kit consists of a zinc-coated coupling spanner wrench and a unique coupling gear socket with steel housing and aluminum gear engagement, designed to protect the steel coupling gear from damage during maintenance. Together, these tools allow the coupling to be held in place (mounted on the alternator or free-standing) while the coupling gear slippage is checked with a calibrated 3/8-inch torque wrench.