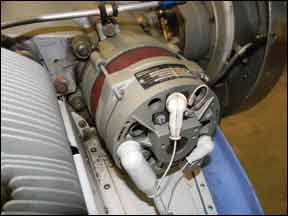 When pilots talk about problems with their airplanes, alternators tend not to be a subject of the conversations. That’s because alternators are pretty reliable, which is a good thing because most of our airplanes have just one and they are run to failure items. However, when an alternator does fail, an owner is suddenly thrust into a confusing world of original equipment replacements, upgrades, overhauls, new manufacturer replacements, core credits, repairs and prices that can vary by 400 percent.

We’ll explain what an alternator does, why it’s important to troubleshoot electrical system glitches before buying replacement parts and what your options are if your alternator truly has slipped its mortal coil.

Alternators can produce their rated amperage output at low engine RPM—important for night ground operations, and a big advantage over generators. However, unlike a generator, an alternator must have electrical power in the system to operate—if you prop start an airplane with a flat battery, the alternator is not going to work.

The alternator takes the electrical power, at least one to four amps, that comes into it through the field terminal and increases it via wires rotating in a magnetic field to the rated amperage, which is available at the output terminal.

A voltage regulator (VR) senses the voltage in the electrical system and varies the excitement to the magnetic field in the alternator, which adjusts the output of the alternator.

The alternator output voltage is higher than the battery rating so that the battery stays charged. Silicon diodes in a rectifier bridge convert the AC power output from the alternator to the DC power the electrical system needs.

Alternators and electrical systems are sensitive to voltage spikes, so an overvoltage relay (OVR) is in the circuit to take the alternator off line if the voltage goes above about 16 in a 12-volt system and 32 in a 24-volt system. VRs that have an OVR built in are referred to as alternator control units (ACU).

If the alternator doesn’t come on line, it’s time to reduce the electrical load on the battery (or rely on the standby alternator system) and land as soon as practical to have the system problem fixed.

What’s Broken?
We had a number of owners and maintenance technicians emphasize the importance of proper troubleshooting before spending money to replace electrical system components.

Mike Busch, principal of Savvy Aircraft Maintenance Management observed that he has often run into the assumption that if there is a problem with the charging system then the alternator is to blame.

Curtis Hughes, outside sales manager of Quality Aircraft Accessories, an alternator repair and overhaul facility, said that an owner may expect to replace one and maybe two alternators between engine overhauls. If it gets to be three or more, there’s probably something else wrong with the charging system causing the problem.

Alternators live in a difficult environment of heat, long times between use and demand for a high percentage of rated power during operation. We had mechanics tell us that in some installations where cooling was an issue because of bad baffling or simply poor design, they would see alternator life drop to as low as 300 hours, whereas alternators in airplanes that were flown regularly had good cooling and were not operating at a high demand, were making as much as 2000 hours before failure.

It’s Broken – Generator
For the owner of a generator-equipped airplane that was dealing with a generator which had expired, the unanimous recommendation was to upgrade to an alternator kit.

Derek DeRuiter, proprietor of Northwoods Aviation in Cadillac, Michigan, said that he has been very satisfied with the kits manufactured by Plane Power of Granbury, Texas. The STC instructions are clear and easy to follow, and Plane Power’s website includes feedback from owners who have included pictures showing the process of kit installation.

We agree that anyone with a generator-equipped airplane and who does any night flying, should seriously consider spending the $500-$800 for an alternator conversion kit as opposed to the $300-$500 for a rebuilt or overhauled generator. It will improve low engine power electrical system operation, reliability and get a weight savings of a few pounds.

It’s Broken – Alternator
For the owner of an alternator-equipped airplane, the number of options available upon death of the alternator are daunting. We learned that most owners tend to simply stick with the original equipment alternator and arrange for an overhauled, exchange alternator to be installed.

Prices vary with the size of the alternator and whether they are belt- or gear-driven, with gear being slightly more expensive. Overhauled alternators are available through numerous sources, from overhaul shops, outlets such as Aircraft Spruce and the various alternator manufacturers. We saw prices ranging from $350 up to $900.

Curtis Hughes of Quality Aircraft Accessories said that he observed that owners usually stick with what was in the airplane, although there are those times that a model simply isn’t available. He felt that was the most common reason to cause an owner to buy something different.

If time is of the essence for a replacement, we found that maintenance technicians tend to recommend either going with an overhauled unit from a shop or manufacturer they trust, while returning the dead alternator for a core credit. In most cases, the overhauled alternator can be in the shop the next day.

Where time is not of the essence, we liked the approach taken by Mark Weigand, a maintenance technician in the Detroit area. If the alternator has worked well, he recommends sending it to a good specialist shop with instruction to bench test or tear down and advise. Often the alternator is in good shape and replacement of a $50 or $100 part will put it right for several hundred more hours. If the problem is worse, and the owner has been happy with the alternator, it can be overhauled and back in a week.

We did get consistently negative comments on the longevity of Kelly Aerospace (which has been bought out by Hartzell Engine Technologies) alternators due to perceived poor quality control. A number of the people we interviewed recommended not overhauling those units.

However, we were also told that Hartzell has gone through the Kelly equipment and replaced or upgraded much of it, as well to bring it into compliance with the rest of the Hartzell line and is upgrading QC procedures. This is encouraging, in our opinion.

When we asked maintenance technicians and overhaul shops what companies they’d go to for new alternators the first name we heard was Plane Power. Its dual-cooling fan design and the company’s “exceptional” customer service and warranty support were widely praised. Its new, 150-amp, alternator was mentioned by a number of people who noted that because there aren’t any airplane systems that demand more than 100 amps, so the Plane Power alternator “must be hell for stout with a rectifier assembly and brushes that are robust,” per one commentator.

Others spoke highly of Tempest, which one person referred to as “over-engineered, and I mean that in a good way.” He said the price point was higher, but he felt the quality made it worthwhile.

InterAv was felt to be a good unit, but we were told by users that there is sometimes difficulty in the supply chain.

Conclusion
When the charging system goes offline, make sure that careful troubleshooting is performed before replacing any parts. If it’s a generator system, upgrading via an alternator system kit is worth the money, in our opinion. If the alternator is bad, and there is time and it’s not a Kelly unit, we suggest having it inspected and repaired or overhauled. If time is of the essence, buy an overhauled unit from a reputable facility or, if you go with a new alternator, we like Plane Power.