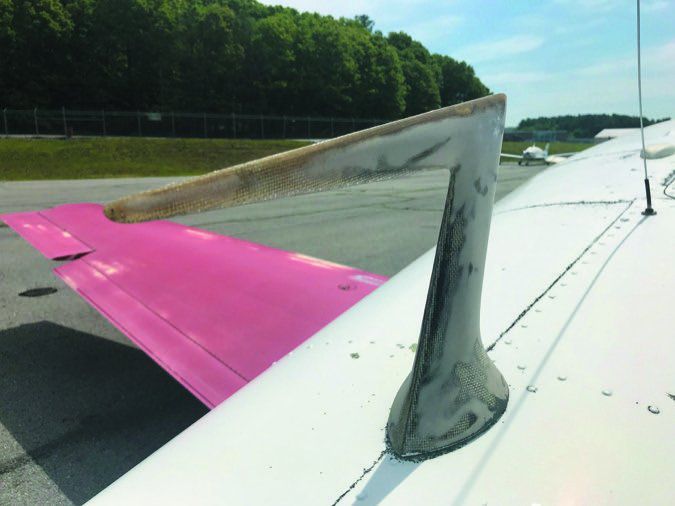 When I worked as avionics tech, it got to the point where I could generally tell how well an aircraft’s comm radios work simply by eyeballing the antennas. When an owner complained about VHF nav radio problems, I had visions of a nav antenna coated with corrosion, the result of years collecting water in the vertical tail fairing. When the airplane showed up, my suspicions were usually confirmed.

Truth is, antennas are one of the most neglected accessories on the aircraft. They live hard lives sitting out and flying in all kinds of weather. Plus, belly-mounted antennas collect grease, grime and sustain sizable amounts of heat when in close proximity to exhaust stacks.

Let’s take a look at the cost and effort that’s required for antenna replacement.

You might not realize it, but antennas are actually major systems that consist of multiple components. Aside from the antenna itself, there’s the signal cable, RF connectors on both ends of the cable and in some systems, a coupler or splitter. For this reason, you might get sticker shock when your shop gives you a quote for replacement. Truth is, replacing the antenna might be the easy part of the job, especially if the airframe is opened up for an inspection or for other work.

In many cases, the cabling that attaches the antenna to the radio could be as old as the aircraft and is subject to deterioration and wear from years of vibration, heat and cold. Consider too, that old coaxial cable is likely non-shielded RG58 (or older) and could be the source of interfering noise that’s worked its way into your radios and audio system.

That’s why many new avionics systems call for low-loss twin-shielded cable. It’s worth shotgunning some old cable because newer cabling is fire retardant. The old stuff might not be.

Even though the teardown effort to access the cable (removing the entire interior, including headliner in some cases) can mean days of shop labor, it’s a task worth doing. Shortcuts don’t count. I’ve seen shops leave old cabling in place and simply route new cable through the airframe. This can lead to serious troubleshooting tail-chasing as a tech is left scratching his head with one hand and his multimeter in the other wondering why the cable doesn’t ring out from one end to the other.

Even if some antennas are in good condition, the shop might have to relocate them so there isn’t interference with new systems. The trouble is there is hardly enough room on smaller airframes to accommodate all of the antennas required with new avionics. Let’s count them.

Typically there are two comm antennas (one for each radio), one VHF nav antenna that connects to both radios via a splitter, one GPS antenna for each navigator (combined comm/nav/GPS systems like a GNS/GTN or Avidyne IFD navigator still require separate comm and nav antennas), transponder antenna, an ADS-B antenna (or two for some systems), marker beacon antenna if still installed, ELT antenna and TAS/TCAS antenna if installed. Got a Stormscope? That requires an antenna, too. While it is possible for two VHF comm radios to share a single antenna through a splitter, this is a rare and expensive interface. If you’ve lost count, that’s a total of 11 antennas all fighting for an interference-free spot on the airframe. It’s a wonder some systems even work at all.

Worth noting is that antenna installations on pressurized aircraft could require additional approvals.

A proven and popular design for replacing older Cessna OEM applications is the CI121-series antenna made by veteran antenna manufacturer Comant. This is the fiberglass whip antenna you’ll see mounted on top of the fuselage of single-engine Cessna models. Aircraft Spruce lists the CI121 for $188. For the underbelly mount, it’s the CI122, sold by Aircraft Spruce for $220. This is a bent-whip antenna with a fiberglass base and metal rod element. Expect a typical invoice of around $1000 for such replacement, including labor.

For replacing original equipment comm antennas on Piper models, antenna maker ITT Corp. offers the DM C70-series antennas. These are staggered on the back of the fuselage and maintain a handsome and stock appearance. The labor costs about the same as the Cessna, but the antennas are nearly twice the price. We saw the common top-mounted DM C70-1/A priced just shy of $400 each. The version that mounts on the bottom of the aircraft (DM C70-4/A) is $450.

Faster aircraft generally require antennas with higher speed ratings. Even when properly installed using doubler plates (this is a stiffener fabricated from sheet metal that attaches between the antenna’s base and the surface of the aircraft’s skin), an antenna that’s not properly rated can come off or worse, damage the skin, requiring a big repair. And as you would expect, antennas with higher speed ratings are more expensive—more than twice the price in some cases.

Navigation antenna replacement won’t be cheap, either. Luckily you might only have to replace one. That’s because it’s common for a single navigational antenna to feed both nav radios in the aircraft through a coaxial splitter. The antenna might be a “whisker”-type dipole antenna or heavy-duty blade set that is a popular replacement for Beech Bonanza models that had the combination comm/nav antenna housed in the so-called flying-V antenna. It’s no surprise that VHF nav antennas live especially tough lives since they’re often installed at the top of the vertical tail in a fairing where water collects at the base. Typical failures are the result of excessive corrosion. Once these antennas deteriorate you’ll notice decreased nav radio sensitivity and the inability to receive a VOR station from a sizable distance. You might also see scalloping needles on the nav display. This antenna (like all the others) should be inspected during each annual inspection because corrosion might be spotted before it’s too late. Basic preventive maintenance will be cheaper than replacement.

Nav dipoles are available in fiberglass and metal, but not all of the mounts are the same so your shop will have to pull the old one off to get the correct replacement. For example, the Comant CI157P dipole antenna that fits a variety of Piper models sells for just under $400. It works for VOR/LOC and glideslope signals.

Complying with the FAA’s ADS-B mandate shouldn’t require specialty antennas because ADS-B systems use typical L-band transponder antennas. For ADS-B Out via a 1090ES extended squitter transponder, a common blade-style antenna will work just fine. But systems with diversity (which helps eliminate shadowing) require a top and bottom L-Band antenna. UAT systems (which operate on 978 MHz) also use a typical L-Band antenna.

But don’t be surprised if the shop wants to replace the existing transponder antenna. Since the antenna lives on the belly, it might be contaminated with oil and grease. I’ve seen some fiberglass blades melt because they were installed too close to the exhaust flow.

L-Band antennas also come in a rod/ball design, which is just that—a metal rod with a ball at the end. These are generally low performance and aren’t nearly as durable as their fiberglass counterparts. Since they’re low profile and difficult to see, they’re easy to damage when washing the aircraft with a brush. Remind the FBO staff to use caution when washing, regardless of which antenna you have.

The common Comant CI105 transponder/ADS-B blade antenna sells for around $170 and the lower-performing rod antenna is around $75.

If you own a fabric-covered aircraft, antenna work can require specialized skill. It also presents some challenges in getting the best performance from a system. That’s because the antenna might require the same ground planes as on a metal aircraft.

For fabric aircraft, technicians often fabricate a ground plane using heavy foil tape or other metallic surfaces for a solid bonding of the antenna. Since there might be limited structural space available for mounting antennas on fabric aircraft, the installation of some systems just might not be possible. Composite aircraft present similar challenges, plus you’ll need to find a shop that’s versed in working with the composite structure.

Advanced Aircraft Electronicswww.advancedaircraft.com. makes a line of antennas designed for composite and fabric aircraft. The company says the antennas have better gain and better impedance matching than some traditional antennas, can be used without a ground plane and can be mounted inside of the aircraft structure rather than to the skin.

Installation is accomplished with adhesive and the antennas have a lifetime guarantee. One antenna works for comm, nav and ELT, although three are required for such an application. Each antenna is $149 and the company sells a transponder antenna for $99. These antennas could require an FAA field approval for installation in certified aircraft, although the company makes a good argument that since these antennas mount inside the structure, don’t alter airflow, don’t require drilling and are lightweight enough to not affect weight and balance, the installation might be considered a minor alteration. It’s up to the shop to decide.

If you plan to order a new cabin cover and also plan on an avionics upgrade, do the avionics first. Chances are the aircraft will come out of the shop with some new antennas installed in different locations than the old ones.

How do you know if antennas need replacement? Inspect them or ask a tech. If the P-stat coating on fiberglass antennas is worn off and you’re noticing deteriorating VHF radio performance, it’s probably time to spend some bucks. Having the aircraft painted? Good shops know not to paint antennas, but it’s worth reminding them not to. It happens.