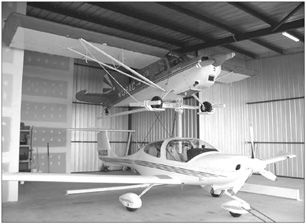 Most of us have heard the tired clich that the best way to end up with a small fortune in the aviation business is to start out with a large one.

Were guessing that went through the minds of folks at ARM Aerospace a few times-the size of their primary market (people with a need to stack airplanes on top of each other) would seem rather small.

Then again, this product is selling well and available through both an authorized dealer network and direct from the manufacturer.

Just what is this Aero-Lift thingie, anyway? Simply put, its a hoist, for airplanes thats not all that different from auto hoists once common in every corner gas station, but more similar to parking lot hoists found in high density city parking garages.

The Aero-Lift provides a one-stop answer to several maintenance and storage challenges, from how to wash an airplane belly to an easy way to work on retractable gear to doubling hangar storage capacity.

Two Models
Available in models of either 2000- or 2500-pound capacity (figure aircraft empty weight, plus fuel), the Aero-Lift is a nice looking machine, fully finished with an industrial powder coat. This is one heavy duty piece of equipment-the individual components appear to be carved from the solid and the entire apparatus weighs about 2700 pounds. While the muscular nature of the components is comforting, seeing your airplane cantilevered into space raises this question: what keeps this thing from falling over?

The answer is the main vertical column, which stands 13-feet-6 inches above the floor and weighs 700 pounds. Keeping this vertical post vertical is accomplished in one of two ways, the most common of which is attachment of two horizontal legs which form a right angle at the base of the column.

Alternatively, theres a floor mount option, which eliminates the horizontal legs, but with some loss in flexibility, since the device is moveable with the legs and can even have wheels. The vertical column becomes the attachment point for the lifting arm, which in turn supports a rack with scoops set up to hold the three wheels of whatever airplane is to be lifted, nose- or taildragger. With the airplane sitting in the wheel scoops and secured by a chocking mechanism, the push of a button activates a motor-110- or 220-volt-on the lifting arm, turning a jackscrew and lifting the airplane to the desired height to a maximum travel of 10 feet. You can stop it at whatever height works best.

Economics
To get a feel for the practicality of the Aero-Lift, we spoke to Mark Boyer, at Pocono Air Center in Mount Pocono, Pennsylvania. While looking for ways to increase the amount of hangar storage available, he found that building new hangars seemed both expensive and impractical.

He found only two options: the Aero-Lift and a hydraulically-powered British contraption that cost four times as much. He ended up with three Aero-Lifts in his community hangar, for both storage and maintenance.

The mechanics love them and despite some initial skepticism, many airplane owners now prefer them, due to the decreased incidence of hangar rash. Boyer says his Aero-Lifts have been 100 percent reliable, requiring nothing more than compliance with the modest maintenance recommendations of the manufacturer. And, unlike most FBO equipment, the machines started paying for themselves as soon as they arrived, since hangar capacity increased instantly. Pocono Air Center was so impressed that theyve since become a dealer for the product.

Frankly, wed love to have one-everything from preflights to changing a nose-gear-mounted landing light bulb would be easier if the airplane levitated according to our whim. But at roughly $9000 for the portable version, its a bit pricier than most shop tools.

But the numbers might pencil out sensibly for some owners. In an informal survey, we found typical monthly hangar rents range from $250 to $500, so purchase of an Aero-Lift in lieu of renting a second hangar would put you money ahead in 1.5 to three years. Not bad.

For most of us, the main problem isnt how to deal with two airplanes, but how to procure hangar space for just one. If you live in an area where the supply of hangars is outmatched by demand, the Aero-Lift could represent an opportunity. If you can find a hangar dweller willing to strike an Aero-Lift-driven deal that will get your airplane into a hangar years sooner than it would be otherwise, it could be an attractive offer to the current hangar tenant, too. Hed not only net some income from the arrangement, but have the benefit of using the Aero-Lift for maintenance to his own airplane.

For more information, you can browse ARMs site or attempt to contact them at the number below. We say attempt because we found this company unusually difficult to communicate with. Most calls seem to go direct to voicemail and ours werent always returned. A scheduled face-to-face meeting was unexpectedly canceled, but the expected call to reschedule never came.

Finally, a last ditch just-prior-to-deadline telephone interview was scheduled-but that call never came either. To be fair, our contacts were made during the busy airshow season. Hopefully, a paying customer will fare better, especially during the air show off-season.

-Denny Cunningham is pilot and former air traffic controller. He lives in Phoenix.