It could be the grandest STC ever, and it’s awarded to Oklahoma-based General Aviation Modifications Inc., for its 100-octane G100 unleaded fuel. The STC is for Lycoming-equipped Cessna 172 models, but the company says it will be expanded in time. That could be sooner than some expect, given the approved data that’s already in place. Another unknown is when the fuel will make it through the supply channels in volume. There is an agreement with Avfuel, a supplier that delivers roughly 40 percent of avgas to the U.S. market, for blending and distribution.

Here is what we learned from our editorial perch right smack in the middle of AirVenture, where the heads of EAA and AOPA, Jack Pelton and Mark Baker, jointly hosted the PAFI (Piston Aircraft Fuel Development) forum to break the big news.

In the forum were Earl Lawrence, executive director of Aircraft Certification at FAA, and Pete Bunce, president of GAMA (General Aviation Manufacturers Association). Earl explained that the original participants in PAFI, Swift Fuels and Shell Global Solutions, had withdrawn. The FAA is considering two new contenders in the pre-qualification process, though they can’t identify them due to PAFI nondisclosure requirements.

Earl then announced that just last week the FAA had issued airframe and engine STCs to GAMI for its G100UL unleaded avgas. The initial approvals are for Lycoming-powered 172 aircraft, but via the AML (Approved Model List) process, GAMI already has an FAA-approved test plan to add the entire avgas-burning fleet over the next so-many months.

The panel was asked if additional approvals are required; do Lycoming and Continental need to approve this fuel? The FAA’s Lawrence clarified that no additional approvals are required—the FAA has approved the fuel. Lycoming and Continental may wish to familiarize themselves with the fuel before adding it to their service information on approved fuels and lubricants, but just like with the initial mogas-in-aircraft approvals decade ago, once the FAA has approved it, the fuel can fly. The engine manufacturers catch up later.

At GAMI’s press briefing and pilot Q&A session, GAMI explained that a spinoff of world-class Bayer Chemical, called Lanxess, has developed its octane-enhancing additive (a nitro-amine according to GAMI’s patent filings) and has dedicated its production of the additive to North American avgas production. Lanxess plans to dedicate enough additive production capacity for 200 million gallons per year, compared to peak avgas consumption in North America in recent years of about 160 million gallons per year.

The alkylate and xylenes in GAMI’s formula (again, from its patent filings) are being obtained from at least three sources each, with each source of adequate capacity to meet demand if necessary. Avfuel is under contract with GAMI to handle logistics of blending and distribution. Talks are underway with existing and potentially new blenders of avgas.

GAMI has already obtained FAA approval of detonation performance (demonstrating the fuel has adequate octane even at minimum specification) across a range of engines the FAA considers adequate to encompass the entire fleet. What remains are a couple of three-to-five-month endurance tests that GAMI has already completed informally, and now needs to repeat under FAA scrutiny. Braly estimates full-fleet approval will be in place by the second quarter of 2022.

The fuel may well roll out initially at flight schools that have dedicated tankage that can be rededicated to 100UL. GAMI and Avfuel also anticipate that certain jurisdictions in particularly environmentally conscious states will be early adopters as well. Avfuel is focusing supply logistics efforts on those most likely early adopters. Some anticipate that nationwide rollout could be completed by AirVenture in July 2023, if not before.

On pricing, Braly explained that at the current WTI (West Texas Intermediate) crude price of $72, the incremental cost of GAMI 100 Unleaded (G100UL) would be less than a dollar, and more likely in the 65 cents to 85 cents per-gallon range. The alkylate component is priced at a margin off California reformulated gasoline, a common index of that high-quality gasoline blending component.

As we explained in previous Aviation Consumer reports, what’s a bit new to the avgas price mix is that about a fifth of the blend is also a potential chemical feedstock, so chemicals pricing drivers will compete in the business cycle with energy pricing. No one is exactly certain what that will mean, except that maybe sometimes pricing shifts will be counterintuitive (crude prices drop, avgas component prices rise). Also, disruptions of the California gasoline market, like a refinery fire, could be reflected across the country in a bump in avgas costs.

More importantly, the cost of goods sold does not always directly translate to price … Braly explained that over time, as Avfuel arranges a broader range of blenders in manufacturing avgas, competitive pressures could moderate avgas pricing. Upon questioning, Braly explained that from the outset, both GAMI and Avfuel have been explicit about licensing the G100UL formulation and the supply to all qualified comers. Neither party has any interest in attracting antitrust attention by discriminating in pricing, availability or supply. 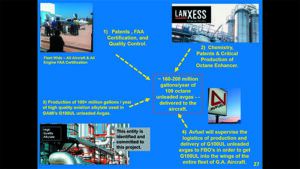 Braly was asked about the STC requirements. He explained the G100UL fuel is about 5 percent heavier than 100LL avgas (though low lead varies from 5.85 to 6.1 pounds per gallon currently). G100UL is 6.3 pounds per gallon. Offsetting this weight, G100UL provides 1 percent greater range than 100UL per gallon.

There is a POH supplement that comes with the STC explaining these weight and balance adjustments, and offers both a simplified and more exact calculation method. In addition, a new fuel filler placard is provided that marks the aircraft as approved for either 100LL or G100UL.

And there’s a sticker for the engine to indicate that it’s been STC approved for the fuel as well. The fuels are completely intermixable, and any mix of G100UL and other fuels already approved for a given aircraft (100LL or perhaps mogas) are approved in the G100UL STC.

On STC pricing, Braly explained that it is still under evaluation, but he expects it to model the EAA and Petersen Aviation pricing for mogas approval in certified airplanes, which ranges from $1 to $2 per horsepower. Upon questioning, Braly acknowledged that if the airframe and engine manufacturers amend their type certificates to include G100UL, then an STC may not be required.

GAMI is working with the FAA to simplify implementation, and unlike a conventional STC, it’s hoped A&P/IA involvement may not be required. Braly envisions using the FBO’s computer to buy the STC, having it automatically filed in the aircraft’s file in Oklahoma City, and being immediately approved to fuel.

One pilot reported that at a Monday morning session, a Continental representative opined that unleaded fuel would never work, as the lead is needed to cushion the valves. Braly explained that much industry work from mogas lead phaseout in the 1980s and 1990s showed that valve distress resulted from reducing fuel octane, not from reducing lead content. Moreover, Braly reminded the group of the FAA’s late 1980s testing of identical engines on a twin, one that flew exclusively on leaded, and the other that flew exclusively on unleaded. The unleaded engine showed less wear at teardown than the leaded engine. Braly also shared a photo of a cylinder from a G100UL test engine, which looked pristinely new after 150 hours of operation.

Braly responded to a question about warbirds, and further enhancement/modification potential with G100UL. Braly shared that G100UL typically tests at higher Rich octane number than even the old 115/145 purple gas that is no longer available. 145 is the Rich rating of that fuel (which contained up to 8 grams of lead). G100UL tests at over 160 Rich rating, which is the limit of the testing equipment. During FAA-witnessed testing, Braly reports he overboosted a 2700-RPM 30-inch manifold pressure-rated engine, eventually to 42 inches of manifold pressure, delivering nearly 40 percent greater power than nameplate at redline CHT, IAT and oil temperatures—with no detonation. (Don’t try this at home!)

Braly was asked about engine and airframe manufacturer awareness of G100UL. He explained that both Lycoming and Continental had visited Ada, Oklahoma, early on to better understand the development effort. Alan Klapmeier flew a Cirrus that had G100UL in one wing and 100LL in the other. As Braly covertly swapped tanks, Klapmeier was unable to determine any difference in engine operation between the two fuels via the Avidyne engine monitor. He explained that TBOs might well be extended, perhaps 25 percent. The removal of lead from the fuel also makes 100 percent synthetic motor oils feasible, and such an oil could offer more than double the drain interval, and afford 15 to 25 degree F cooler CHTs.