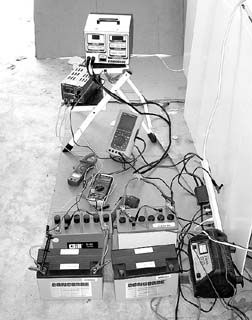 For owners who like to save a few bucks by doing some of their own maintenance, battery care and replacement is high on the list of things you can do yourself. But even if you dont do your own wrenching, when your battery flunks a capacity test during annual inspection, your shop may call asking for your preferences on replacement.

What do you tell them? Well get to that in a moment but as a refresher, refer to our primer on battery technology in the November issue of Aviation Consumer in which we provided basic information on both sealed and flooded (wet cell) batteries, including the generic pros and cons of each type. In this article, well compare Concorde and Gill, the two top aircraft battery makers. The true measure of a battery is how well it performs and whether it lives up to promised specifications.

As we promised in the first article, half of the test batteries were conventional flooded-cell designs while the rest were the sealed or so-called absorbed glass mat equivalent. According to a strict reading of the FARs and recent advisory circulars, aircraft batteries are supposed to undergo a yearly capacity test to see if they still measure up to specifications. Because many shops lack the equipment to do this, the test isnt always done.

Yet at least two companies make moderately priced capacity testers suitable for this task. For this article, Concorde graciously loaned us one. Otherwise we would have done the tests manually, using a calibrated load and ordinary volt and amp meters. This is both time consuming and awkward so we were just as happy to use the automatic tester.

The tester we used is a Concorde Model 3000, which tests 12- or 24-volt batteries, either sealed or flooded. You start with a fully charged battery, attach the terminal wires to the battery under test, turn the unit on, key in the published amp-hour numbers and then press test.

The test takes an hour, and places the user programmed amp load on the battery.

It then automatically shuts down and displays the test results in percent. No external power is required for the tester, which Concorde told us would retail for around $800. It will be available through Advanced Power Products at 877-522-8837.

We got 100+ percent results with the two Gill batteries, however, the Gill batteries had significantly lower published amp-hour ratings than the equivalent Concordes. More on this in the findings section.

The Players
Gill batteries have been around in the aviation market so long that many of their products are found in the manufacturers equipment lists of many aircraft. On the other hand, Concorde, established in 1977, has obtained STCs to install their products in practically every airplane. Both Gill (www.gillbatteries.com) and Concorde (www.concordebattery.com) have good Web sites with user manuals, cross application charts, dimensions, ratings, instructions for continued airworthiness and more available for download.

We recommend a Web site visit and guarantee youll learn things. We did. Example: Never charge a new battery (or an old one) with the caps off and the charging of a battery in the airplane is forbidden by the National Electrical Code as a fire/explosion hazard.

Test Procedure
We obtained a popular-size flooded wet-cell battery and its AGM (sealed) counterpart from both Gill and Concorde. Concorde has several more choices in both wet cell and AGM in the form of extra capacity batteries, so we tested them as well for a total of six test batteries. We stuck with 12-volt models since theres no internal feature difference between 12- and 24-volt batteries.

A 24-volt battery simply has twice the number of cells and also higher maintenance, sometimes half the warranty period, costs twice as much, as do lamps and parts for higher volt systems. So much for progress over 12-volt batteries.

We tested each battery in two standard measures. The first is the one-hour emergency rating, an internationally accepted JAA aircraft standard for capacity testing and the only specification published by both battery makers. Gill publishes 30-minute ratings but Concorde generally does not. Gill publishes cold cranking amp ratings (CCA), but Concord publishes CCA only for its flooded batteries. Concorde uses the international standard ratings, similar to CCA, but different enough to make it impossible to compare to the well-known CCA standard.

Since we feel CCA is an important rating for determining how well your engine will crank and how long it will crank in cold weather, we took the batteries to a local Interstate battery distributor for a CCA test on their test equipment. CCA testing is still the standard for auto batteries.

Cold cranking amps is equivalent to a specified number of amps for 60 seconds at zero degrees F with an end voltage of 1.2 volts per cell (drained). It basically indicates how well the battery will turn over thick aircraft oil and cold-shrunk rotating parts when the temperature drops. Its a particularly important reference if you operate in cold weather. Starter motors are designed to turn over at the lower voltages of high battery drain conditions.

Conditioning, Findings
Before testing started, the plan was to condition each battery by five charge-discharge cycles to a 10.5-volt end point, a standard in the industry as the point at which the battery is considered discharged. Gill requested 10 cycles, so we agreed to do so before formal testing began.

This conditioning procedure helps the battery develop its full rating-just as physical training helps an athlete to breathe better. Concorde made no requests on conditioning, as long as all batteries received the same treatment. That said, Concorde stated that because of the higher capacity of their batteries in the same size case as the competition, the density of the active material is greater and that the capacity would continue to improve for up to 75 charge/discharge cycles. This is plausible, but we did not test any battery for 75 cycles to verify the claim.

Across the board, the Concorde batteries provide significantly greater emergency capacity than the Gills do, according to our tests. Before you look at percentages and say the chart is wrong, note that the Gills were rated about 25 percent less emergency capacity (amp-hours) than the equivalent Concorde. All batteries met their ratings, thus 102 percent of 23-amp hours is still significantly less absolute capacity than 99 percent of 29 amp-hours. Example: the Gill G35S is rated at 23 amps for one hour, whereas the equivalent Concorde is rated at 29 amps. Factoring in the actual percent testing differences gives an emergency capacity amps increase of 22.8 percent to the Concorde.

OEM or Not?
If theres a downside to the Concorde line, its that they arent original equipment and are instead installed under an STC. However, newly updated Concorde STCs now address any past issues or questions of fit, although it is not a particularly elegant solution in some cases.

Some Cessnas will require the plastic battery box lid to be trimmed with a utility knife, while other Cessnas will require that part of the plastic handle on the battery be trimmed. For some Pipers with previous top-edge fit problems, the Concordes now have a chamfered top edge. The Concorde STCs cover these minor mods, so its just a logbook entry.

Note that Concorde also employs what they feel is an improved terminal material, mounting lug and conical (spring) washer design, based on studies of years worth of service difficulty reports on aircraft batteries. These terminals also permit the easy use of a torque wrench-important to terminal integrity.

This is essential to avoid overstressing the battery posts. The different terminal design in no way interferes with the standard battery cables installed in the airplane. We like the design over the old wingnut setup.

That said, we do not like the molded Concorde lift handle. To get a battery in a tight box in an awkward position means holding 30 pounds by your fingertips-and possibly bashing your fingers on the side of the box while your at it. Wed sure like to see some sort of clamp-on handle to reduce the possibility of dropping a battery. Our simple solution was to thread two nylon cords under the plastic handles for easy handling.

Conclusions
First, AGM Batteries look attractive if one is made for your particular aircraft-and most popular 12-volt and some 24-volt models are indeed covered. Handle ergonomics notwithstanding, Concorde is the best power choice, in our opinion, although you wont necessarily find them at every FBO as you will the long established Gills.

That said, the Concordes in this test group weigh from .5 to 5.5 pounds more than the Gills depending on which model you select. But for the slight extra weight, you get three times the model choices in this popular size. Concorde batteries have a denser makeup and more active material to get the extra capacity.

AGM batteries perform better than the wet cells on most counts and are maintenance free-no water adding, no painting battery boxes, no corrosion to repair from acid mists. Further, AGM batteries cant spill electrolyte and can be mounted at any angle.

The price difference between conventional flooded cell and AGM technology is minor and in aviation, surprisingly, this is one of the few product areas where weve found such price parity. Aviation AGMs are actually a bargain. The AGM battery commands a significant premium in the marine or auto markets, for example.

Another big plus for AGM batteries is that they self-discharge at about one-third the rate of wet cells. Your airplane can sit for three months and will still start-not that we would recommend that type of abuse. An AGM will also turn the engine over with more vigor and crank longer than a wet cell will. (The Concorde Platinum Edition CB35A extra capacity model has one amp greater emergency capacity than the AGM extra capacity version).

For cold weather, the time when you will least want to fool with battery maintenance, the AGM is a must-have, in our opinion. The voltage level tends to hold up longer than a wet cell, which drops sharply as capacity drops due to higher internal resistance in the wet cell.