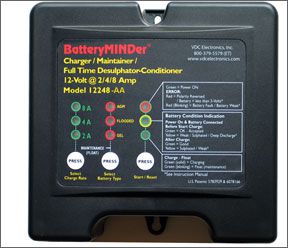 Although aircraft batteries arent high on our list of things to worry about, that isnt the case for many owners, given the volume of reader mail we receive on this subject. Battery chargers figure into this concern, too, and following our report on this topic in January 2006, the subject has become, improbably controversial, spurred along by some new technological developments.

By virtue of customer complaints about Gill sealed batteries, our previously recommended battery charger choice, the Battery Tender Plus by Deltran Corp., has been withdrawn from the aviation market and another company, VDC Electronics, has introduced an aviation-specific design based on charging profiles from the Concorde Battery Company. Our tests of this device show that its promising, with circuitry that reduces the peak charging voltage limit and lowers the float voltage for aviation AGM batteries.

The charger also has a temperature sensor that keeps voltages optimized for storage environment, which will benefit batteries in hot hangars, in our view. In this report, well examine this new technology and explore whether the aviation charger meets its claimed specifications and if its worth the money. (It does and it is.) For comparative purposes, were also looking at some off-the-shelf chargers.Surprisingly, many charging profiles are recommended by battery manufacturers and these profiles arent just limited to battery chemistry/construction types such as flooded and sealed cells. They also apply within the same genres and from brand to brand.

To improve performance, higher end chargers have user settable profiles, something thats especially important for AGM-absorbed glass mat-batteries that are becoming popular for aircraft use.

Temperature sensors have been around a long time, but have previously been restricted to high-end chargers used for multiple deep-cycle battery setups. Some chargers have a temperature sensor capability built into the charger itself, but this is a poor second to a ring terminal actually attached to the battery, such as the VDC aviation model has. The VDC aviation charger models 12248-AA and 24041-AA sense the battery temperature and protect the battery from getting too hot, as well as adjusting the charger for the ambient external battery temperature. The unit also protects itself from excessive heat or output. Note the -AA model designation and that model without this suffix have a generalized charging profile, which uses higher voltage. These models dont have the temperature sensor, although its available as an option.

In recent years, the cost of user-selectable charger controls has decreased dramatically. For years, the $200 and up marine/RV chargers had user-selectable functions, but lower cost units generally had either low output or single-stage charging. Aviation battery makers have their house brands, but these are obscenely expensive. As a result, demand for sub-$75 chargers with so-called smart charging or multi-stage charging profiles has grown. So has interest in anti-sulfating technology that reduces the batterys tendency to self-destruct with time and/or disuse or incomplete charging.

These chargers were limited to low current output, serving primarily as trickle or maintenance chargers. And no single charger that we know of had it all-smart

charging, battery type selection, high output and desulfating. But the new VDC aviation and general purpose models do have these features. VDC electronics intends to limit the dealer sales of their -AA aviation battery units to those dealers who demonstrate a commitment to serving the GA market. In this vein, VDC recommends Dean Ritter of Diversified Aviation in Oklahoma City as a source. (Contact http://www.thebatteryminder.com/, 405-722-1270.)

We tested both sealed AGM and wet cell or flooded Concorde and Gill 12- and 24-volt aviation batteries, at two temperatures and under deep discharge. Each battery was charged/discharged three times using an inverter-based 10-amp load with an auto shutdown at 10.6 volts.

We tested at 70 degrees F and 20 to 25 degrees F, both for charging and float, since the float temperature in the VDC also changes with temperature. Charging speed wasnt measured because the chargers had such different ratings. With the multi-current models, for instance, all you need to do is crank up the current to

charge faster, although theres a definite optimal charge current depending on the capacity of the battery. Smart chargers, as a group, charge faster and more completely than do constant-voltage types.

The VDC aviation-optimized charger is available in both 12-volt (12248-AA) and 24-volt (24041-AA) models. Both met their specs within a tenth of a volt at tested temperatures. We tested the temperature sensor with local temperatures in the 20s and found that the sensor worked as advertised and increased the peak and float voltage. The sensor also kept the battery from getting too hot, although this is only an issue with high charge currents and/or high ambient temperatures. The hotter the battery storage, the more significant this feature becomes.

Charger operation is silent and the weatherproof case is a plus for damp or humid environments. The unit is light, small and has a selection of useful options, such as ring terminals with a quick disconnect so you can easily switch back to quick clamps.

The chargers have all the popular smart charger functions, including non-sparking connections, reverse polarity protection and an auto-soft start to protect deeply discharged batteries from high inrush current. In-line fuses are included as an additional safety feature. The VDC units have a generous five-year warranty.

There are numerous indicator lights to inform the user of charging status, all accompanied by an explanation placard on the case. If we have any quibble, its that theres too much information and too many charging choices for some users. But VDC deserves kudos for listening to aviation customer comments and intends to reduce the number of buttons in the future. Look for a simplified aviation model in about six months, says VDC.

The B&D model VEC 1089ABD, purchased at Wal-Mart, is one of a family of variable power output and special feature B&D chargers. On the upside, this model featured smart charging technology, multiple charging current and battery type selections, great clamps and a battery equalization feature, which is for wet-cell deep-cycle RV-type batteries.

The downside was a noisy fan, which runs all the time, even in the long-term trickle mode. This is not a deal killer, but the aggressive charging voltage is too high for an aviation battery. We got peak charging voltages of over 15 volts, which, in our opinion, is simply too high for any battery on a regular basis. Theres also little documentation, but error codes are printed on the unit. There are no extra cables or external fuses. For big, flooded-cell deep cycle batteries, this product may the ticket, but not for aviation batteries-AGMs especially.

At such a cheap price for a smart charger, this product was a wild card. It comes in a paper-thin box with a piece of paper with four lines of use instructions. Its rated at 3 amps but quickly dropped to 2.5 amps for most of the charge cycle. Float voltage was too high at 13.99 volts at 70 degrees and this voltage significantly exceeds all known manufacturer recommendations. (See http://www.acichargers.com/, 530-677-9429.)

Its small and light-like a bar of black soap-and ran almost too hot to touch. A single indicator serves double duty-green for battery OK/charged and reddish orange for charging. It also comes with ring terminals and a fused DC power line. But this one isnt recommended because of the high float voltage, unless its used on wet-cell batteries that are checked regularly for electrolyte evaporation.

We included these non-aviation models as a low-cost comparison to the aviation versions from the same company. They arent multi-stage chargers, but they do have desulfating circuits and a reasonably low price. Output is low at 1 and 1.3 amps respectively. Float voltage is 13.4 volts, which is acceptable for general-purpose batteries. Now that VDC has the aviation-specific models, theyve decided to stop recommending these chargers for aviation batteries. They obviously feel their aviation models are the way to go-and so do we.

The VDC aviation 12- and 24-volt models are our unequivocal first choice. VDC has made a commitment to the aviation battery market and for now, theyre the only smart chargers fine-tuned for aircraft batteries. They see aviation battery chargers as an underserved market and theyre right. Even the battery makers house brands are not as voltage specific, are much more expensive and are mostly lower powered.

Why now for an aviation-specific charger? One reason is airplanes are sitting longer and the need for a bench charger is greater than ever. Second, AGM batteries, while our recommended choice, do best with an optimal charge profile. Concorde now sells far more AGMs than flooded cells.

Third, 24-volt batteries are expensive, are becoming more prevalent and are more trouble-prone than 12-volt models-you have twice the chance of a cell failure, since there are twice as many cells. VDC has pledged in writing to double the life of your battery by use of both the temperature sensor and desulfating technology. Time will tell, but we wouldnt be surprised.

In this case you get what you pay for-maybe more considering what they do. Both Concorde and Gill have blessed these chargers. We are unsure why VDC markets the charger as exclusively for aviation batteries, since the aviation model will certainly do an acceptable job for garden-variety batteries, too. The only real difference between aviation batteries and other batteries is the use of a higher concentration of sulfuric acid in aviation types and the peak voltage is lower for the AGM setting. VDC disagrees with us, however, and says use of the aviation model chargers for non-aviation batteries should be avoided for longest battery life. Note that the AGM setting is to be used for both AGM and flooded aviation batteries from Concorde. Gill apparently concurs. Check your specific current VDC charger documentation.

Kim Santerre is editor of