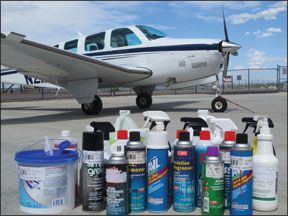 For many pilots, the first realization that the bellies of their airplanes are becoming hazardous waste sites is when ATC advises that their transponders are intermittent. Investigation reveals a layer of goo on the belly antennas, doing its best to block the signal.

Frequently cleaning the by-products of engine operation—oil, grease, soot and other delicacies—off of the belly isn’t just presenting a pleasing view to the world when over-flying, it helps keep the dorsal antennas working their best, keeps potentially corrosive materials off the paint and aluminum and lets you easily see whether the fasteners are in place or the paint isn’t.

The idea is to be able to remove that coating of grease, oil and soot without having to wear a hazmat suit. For many of us, water isn’t available at the hangar, or the airport requires that all washing be done on a wash rack that has a drain that catches the crud that comes off of the airplane—and it’s a half mile away. That means that when it’s time to just clean off the belly, we want to be able to do it without having to turn it into a major production.

We wanted to see what commercial degreasers worked, how much they cost and how easy they were to use, with emphasis on ease of use. To start, we went to Aircraft Spruce’s website, typed “degreaser” into the search box and were guided to 57 products. After weeding out those that were primarily targeted at cleaning engine parts, were not for painted surfaces or came in industrial-sized drums, we whittled the selection down to 25. We further ruled out most of the degreasers that could not be sold in several states, cutting the number to 17.

A few days later, we received two boxes of degreasers and headed for the airport, where we planned to try all of them on a Beech Bonanza that our local shop gleefully set aside for us because they weren’t looking forward to cleaning its belly. They also made a Columbia 350 available so we could see how things worked on a composite airplane.

Packaging
We sorted the degreasers by their containers, rather than by contents. Packaging was aerosol, hand-pump spray bottle, solution to be mixed or wipes impregnated with the cleaner. The chemical makeup varied from toxic to non and flammable to not.

Having once been employed where a chemical poisoning took place, we are reluctant to use, and cannot recommend, a product that is toxic and does not specify on the label what’s inside. That label may be all that’s available to inform a medical team so that it can take proper action in time to save a life.   We did not test one of the degreasers we ordered, X-IT Carbon Remover and Cleaner. It was advertised as “. . . safe enough for daily aircraft cleaning and maintenance.” Yet, once we had the product in hand and read the label, we saw that it was a commercial cleaning product, “not for the general public,” and gave extensive warnings regarding protective apparel.

We also did not review Grez-Off Heavy Duty Degreaser From Spray Nine, as its label warned of potential damage to paint and called for a spot check before using—something not mentioned in advertising.

A number of available degreasers could not legally be sold in 17 states due to the hazardous nature of their contents. Most were for hard-core grease removal—more oomph than is really needed for cleaning an airplane’s underside. We evaluated only one of those, LPS HDX Heavy Duty Degreaser. It worked well, but there were cheaper, safer alternatives.

We found that price was not related in any fashion to the effectiveness of the degreaser. We purchased the smallest container available, so a particular unit price listed could potential be lower with a larger purchase—including 55-gallon drums for some degreasers.

Aerosols
We purchased and evaluated five aerosol degreasers with unit prices ranging from $0.25 per ounce through $1.20 per ounce. Two, including the cheapest, Simple Green Foaming Crystal, were foams, which were not especially user friendly. They did not apply evenly and tended to drop off the belly in gobs, somehow timing it for when we were underneath. The foam penetrated and lifted grease well, but only where it had originally adhered, leaving a patchy result that took some elbow grease to fix.

The other three worked well. We particularly liked AVL Fast Acting Cleaner/Degreaser as the aerosol spray itself visibly penetrated and lifted grease as we were applying the product. It was the best combination of price and effectiveness.

None of the aerosols provided a degreaser that could be used as a general cleaner. Because belly grease is not terribly hard to remove, we were looking for a product that could also be used to clean the rest of the airplane.

Spray Bottles
We purchased and evaluated five spray bottle degreasers with prices ranging from $0.23 to $1.11 per ounce. Again, price was not an indicator of effectiveness. One puzzled us—PPC Crud Remover was packaged in a spray bottle, but instructions called for it to be diluted before use, which meant another container was required to use the diluted stuff.

The most expensive, Cessna Ultra Magnum Multipurpose Aircraft Degreaser could not be used on polished surfaces. One, N’vro Solve Aircraft Belly Cleaner/Degreaser, calls for it to be rinsed off with water, something that may not be available.

One cleaner, Aero Cosmetics Wash Wax All Degreaser, claims to be not only a general cleaning agent for the entire airplane, but to wax it as well, all at once. We do not know how well the wax holds up in service, but when we followed the instructions, spraying it on and wiping it off with either a rag or paper towel, it left a slick, shiny surface.

All of the spray bottle products worked just fine, so our recommendation is to go with either the least expensive, Nevr-Dull Natural Degreaser at $0.23 per ounce, or the product that can be used for overall cleaning and waxing of the entire airplane, Aero Cosmetics Wash Wax All Degreaser. At $0.62 per ounce, it seemed a pretty reasonable all-in-one degreaser/cleaner/wax.

Mixes
If you have water available and drainage is not an issue, one of the degreasers that is diluted with water, can be applied with a long-handled brush and then rinsed off with a spray of water is probably the easiest and least expensive way to go about cleaning the belly.

All three worked well—we wouldn’t hesitate to choose any of them, although it should be noted that the Mach #1 Degreaser/Cleaner label specifically said that it cannot be left standing on the airplane—it must be rinsed off with water. Both Crystal Simple Green Industrial Cleaner/Degreaser and Earth Soap Concentrated Cleaner/Degreaser can be used as a general aircraft cleaner—so one product can do everything but wax the airplane, something we like.

Wipes
We had high hopes for the GLI Grime Off Heavy Duty Cleaner and Degreaser Wipes simply because we’ve used cleaner-impregnated wipes in other applications and they have proven tremendously handy.

We were disappointed. At $46.75 for a tub of 75 wipes—or $0.62 per wipe—the price is high. In use, the wipes were effective in cutting grease, however, our experience was that each one was good for about two square feet of greasy airplane belly surface—and that was carefully using every square inch of the wipe. We also found that a damp rag or paper towel was still needed to get the last of the scum off the skin. We cannot recommend the GLI wipes.

Conclusion
After several hours of getting down and under, we came to a number of conclusions: First, airplane belly grease, exhaust soot and general crud is not that difficult to remove—so industrial strength, high-hazmat chemicals generally aren’t necessary.

Second, the products we tried worked as well on composite as on aluminum surfaces—after all, they are working on the paint, not the stuff under it. Third, if water is available and easy to get to, the diluted mix and a long-handled brush is the easiest and cheapest way to deal with belly grease. We’d go with a mix that can function as an overall cleaner and degreaser, Crystal Simple Green or Earth Soap.