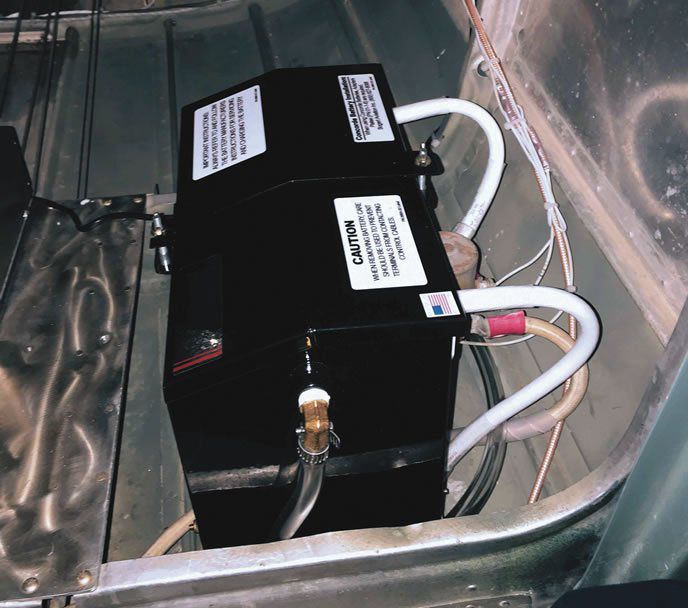 While the aircraft battery box is a thankless component that has to be inspected annually, its often neglected by owners and even by some mechanics. Thats a bad thing because a battery box has more critical functionality than you might think. Neglect can lead to unnoticed airframe corrosion, engine starting problems, audio system noise and other electrical system nags.

In our view, some of the OEM boxes werent made to withstand the harsh conditions to which theyre subjected. That makes routine and careful inspection critical. When its time to replace one, brace for sticker shock. Who would think an OEM battery housing would cost over $3000? Thankfully, there are alternatives.

A Tough Life
Battery boxes can be metal or plastic, depending on the aircraft model and vintage. Consider that the metal box used in many pre-1975 Piper models have been in service for over 50 years. Even plastic housings used in later Cherokee models could have well over 30 years in service. Fluctuations in temperature, airframe vibration and leaking battery acid takes a toll not only on the enclosure, but also on the mechanical and electrical accessories inside the box.

The negative terminal is simply soldered to the inside of the box, while a ground strap on the outside serves as the main ground. Battery removal and reinstallation, corrosion buildup, overtorquing, airframe vibration and the breakdown of the solder can ultimately stress the connections, causing high resistance and heat which, in worst cases, can melt the positive terminal post off the battery.

Corroded terminals can also lead to high resistance and a voltage drop-robbing power to the starter.
Leaking battery acid is an enemy to the box and to the airframe. One job of the battery box is to expel leaking battery acid and vent battery gases. While this isnt so much of an issue with a healthy battery, a battery with a weak cell or a cell with internal resistance causes the acid to boil and come out of the top of the battery.

Some boxes (including those on Piper models) have external vent tubes to catch the sliptream from the belly of the aircraft and push fresh air into the box, while an exit line sends the vented air back overboard.

A drain fitting on the bottom of the box expels any liquid that gets trapped in the box. Boxes for most Cessna models, on the other hand, dont have inlet or outlet venting and drainage systems to remove damaging battery gases and liquids. This can lead to faster deterioration of the box, particularly aluminum boxes.

Speaking of deterioration, consider the consequences of battery acid that is leaking from a battery box. The acid can end up between the aluminum skins and between rivets on the airframe-a condition that might not be easily discovered.

Rebuild, Replace
Mail order supplier Aircraft Spruce and Specialty sells a small variety of aftermarket boxes and hardware, but not all replacement options are FAA approved. It sells a fiberglass box for around $110 and an aluminum box for around $190, but these are for experimental aircraft only. You could fabricate your own and have it signed off as an owner-fabricated component, but unless youre real handy with sheet metal work, we think building a system with appropriate venting and drainage would be difficult.

Keep in mind that not all models utilize a battery box, but instead a battery tray, battery lid and vent tube. If the aircraft is type- certificated with a box, youll need to swap it with an FAA-approved replacement.

More than one shop told us that sourcing many OEM battery boxes is either ridiculously costly or impossible. For some Cessna models, an OEM replacement box can cost over $3000 and has a long lead time. Unanimously, shops prefer the aftermarket battery boxes made by Bogert Aviation in Pasco, Washington.

Bogert has FAA and PMA-approved replacement battery boxes for Piper and Cessna applications and is currently working on approved solutions for other aircraft. The companys latest box for older Cessna 180 and 182-series applications have provisions for venting, improving upon the design of the original housing, which doesnt have venting.

The retrofit includes a venting system that connects to the battery box. The system requires drilling through the belly of the aircraft for mounting the inflow and outflow venting hardware (forward and aft scoops) for fresh air to enter the box and for air to escape. The kit comes with a drilling template and detailed instructions for performing the mod.

On Cessna 150-and 172-series aircraft (where the battery boxes are mounted on the firewall), the installation process is slightly different. The retrofit requires drilling a single hole in the rear pressurized air inlet baffle of the engine. This is to accommodate a small air pickup tube that mounts directly to the baffle, while the other end of the line connects to the battery box.

Both venting modifications are blanketed under the STC of the battery box. It has instructions for continued airworthiness (ICAW) and requires an FAA 337 form, but doesnt require a field approval. Bogert Aviations Richard Bogert-an A&P, IA and the product designer with over 30 years of practical experience, told us that the modification can generally be accomplished in a couple of hours. Shops we spoke with praised the retrofit for being easy to accomplish.

Aside from venting, we think the Bogert box design is superior to most of the original equipment battery boxes we have worked with, and other technicians we spoke with agree. For example, the main battery enclosure and the drain tube fittings are made of stainless steel, and unlike many OEM boxes that are soldered together, Bogert boxes are assembled using a Tig arc welding process and finished with powder coating. The stainless steel vent tube housing is welded to the battery box and attaches to a threaded, adjustable copper fitting on the outside.

If the battery box is in serviceable condition, Bogert offers an STC-approved rebuilding kit (developed and approved back in the early 1980s) that modifies the existing design of OEM battery boxes for the better. This includes new nylon flange shorting guards, plus replacement battery cables that replace the braided straps and ground terminals known for high-resistance connections.

Given the cost of a new Bogert box, which can range from around $800 to over $1100, depending on the application, rebuilding an existing box could be a better option if the housing isnt broken or corroded. Visit www.bogertaviation.com, 800-627-8088.