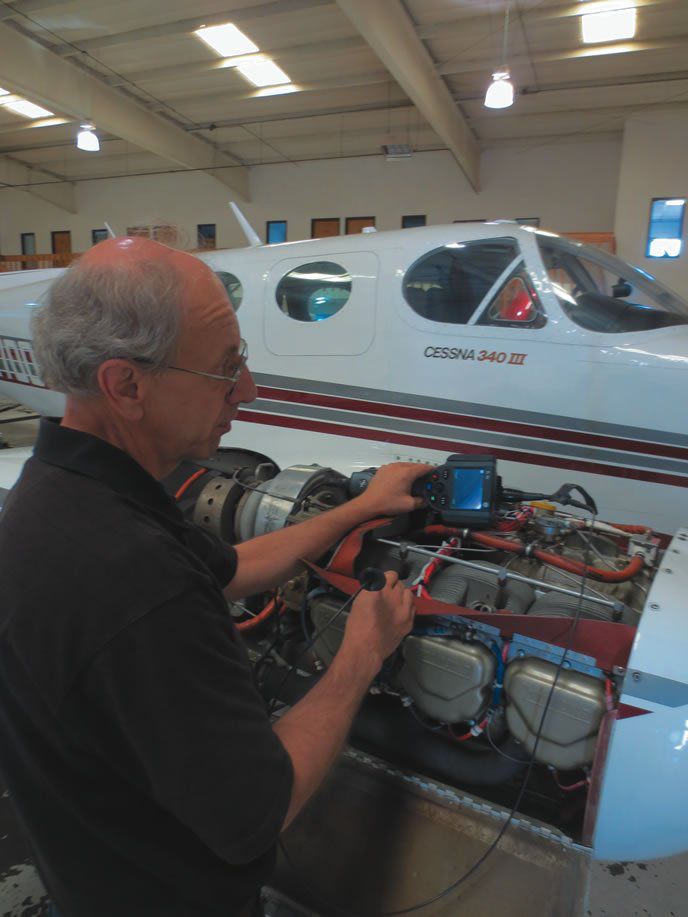 Ever since the Wrights, one of the vexing problems of aircraft maintenance has been access to the nooks and crannies of the machine. Maintenance technicians have spent major portions of their lives with flashlights and mirrors peering through inspection ports trying to assure that all is well within; at significant expense, major assemblies have been unbolted and removed to allow visual inspection of their insides because of a symptom of illness—often to find that they are healthy—while the act of removal and replacement itself caused damage.

The first borescope—a skinny tube with an objective lens on one end and eyepiece on the other with a relay optical system in between—was developed shortly after the first World War . It proved effective; although the miniaturized optics meant it wasn’t cheap and getting effective illumination to the area of interest was a challenge.

The aviation applications proved self-evident. Engine manufacturers begin recommending their use in the piston world and mandating it in turbine applications. Because they were expensive and not absolutely required for piston engine aircraft, it was rare to find a borescope in a shop that didn’t cater to the turbine set. (There is now at least one AD that requires borescope use in a piston engine cylinder inspection.)

Another problem was that the original, rigid tube borescopes were limited to straight line applications. One could be inserted through a spark plug hole of a cylinder and get an excellent view of the top of the piston and a little of the cylinder walls. Even with a mirror or prism arrangement, it could be tough to see what was most often the area of concern, the valves.

The advent of fiber optics allowed flexible borescopes to become a reality—suddenly it was possible to snake the tip into more locations and find corrosion that had been hiding. Articulated tips were developed so that they could be turned to look back in the direction from which the scope had arrived—getting an excellent view of valves and their seats. Still, cost stayed high as it took a lot of fibers in the fiber optic relay to give acceptable image quality.

The borescope world changed with the advent of the inexpensive, high-resolution miniature video camera and LED lighting. Now, what is technically referred to as a videoscope—a tiny camera mounted on a flexible or rigid tube—has become ubiquitous. We are of the opinion that a videoscope with image quality suitable to be a useful tool in a maintenance technician’s arsenal to help make an informed decision about the health of a cylinder and find corrosion in hidden areas of an airframe can be purchased for under $1000.

We think that there is no longer an excuse for a shop not to own one. We also recommend that any owner who has been advised of low compression on a cylinder not agree to pulling that cylinder until it’s been inspected with a some type of borescope—even if that means going to another shop to have it done.

When we surveyed the market for videoscopes, we found some for under $50 that may well be just the thing for looking into the tight places in the airframe. However, without an articulating head, we don’t think they’re adequate for getting a good view of all of the inside of a cylinder. As with much in aviation, you get what you pay for with a borescope or videoscope and image quality is everything. When it comes to assessing the condition of the inside of a cylinder, we think that it’s possible to buy an adequate unit for under $500.

When it comes to inspecting turbine wheels and blades for FOD and cracking, the need for precise imaging and significant magnification as well as being able to take and record measurements means going to a much higher quality, precision videoscope. Our market survey indicated that a shop should be prepared to spend on the order of $10,000 to $25,000 and work with vendors to get a scope that is right for the inspections the shop does.

Another factor to consider in selecting a scope is the risk of damage to the head should it be dropped or jammed against something during an inspection in a tight area. The less expensive scopes are not particularly damage tolerant, so what might be considered a low-speed impact may mean it becomes junk. The high-end scopes have camera housings made of tungsten or titanium.

Some videoscopes have displays included with the kit, others must link to a computer, smart phone or tablet to display the image.

We were given a demonstration of a GE Measurement and Control XL Vu Videoprobe, a $17,000 precision instrument, by Scott Utz, principal of Arapahoe Aero Aircraft Maintenance at Denver’s Centennial Airport. The unit included a display that was far clearer than our iPad, with better contrast.

Utz told us that it’s a regular practice to connect the videoscope to a large computer monitor when showing a customer the condition of his or her engine. He told us that while the display on the GE unit is excellent, the resolution of the optics can be best appreciated on a computer monitor. When a customer can clearly see an area that a maintenance tech is concerned about, it helps the decision process.

As with other videoscopes, still images and video from the GE unit can be emailed or streamed in real time to allow a customer to see them from anywhere in the world or a maintenance tech to get a second opinion on an issue.