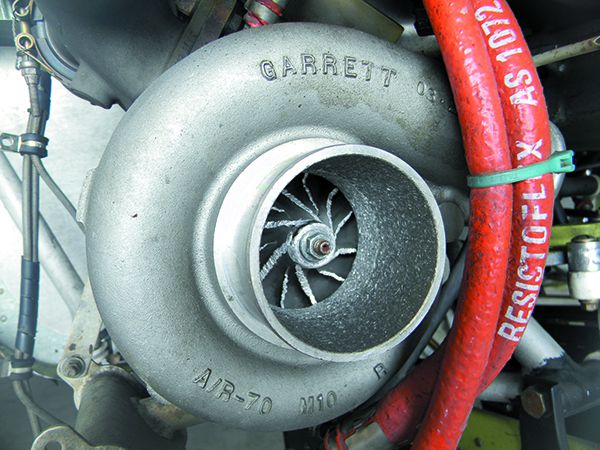 In researching this article we got feedback from owners of turbocharged airplanes who reported that they had to overhaul the turbos at about 1000 hours of operation and an equal number who said that their turbos ran fine all the way to when they overhauled the engine. We came away with the opinion that an owner who follows good engine operating procedures generally—no rapid power changes, allowing the engine oil to warm up prior to takeoff and changing the oil on a schedule that reflects hours of operation as well as calendar time—can reasonably expect the turbo to make it to engine TBO.

In speaking with various shops and with Mike Busch, whose Savvy Aviation provides maintenance management to several hundred general aviation aircraft owners, we learned that when there is a problem with a turbo system it’s important to carefully troubleshoot the matter rather than blindly replacing components in hopes of fixing things. In general, there are five things that can go wrong with a turbo system: problems with the turbocharger, controller or wastegate, or leaks in the induction or exhaust systems. Most manifest initially with a loss of manifold pressure at altitude or premature bootstrapping (loss of manifold pressure control because the wastegate is closed). The underlying problems tend to have subtly different symptoms, so it’s important to carefully analyze what’s going on.

When you notice a problem, document the details as precisely as you can—power setting, manifold pressure behavior, airspeed, altitude and outside air temperature at the least.

If the problem is a sudden, dramatic loss of manifold pressure, assume worst case—that it’s due to an exhaust system leak, that hot exhaust gases are now spraying around inside the cowling and there is a very real and serious fire risk. Assuming anything else puts you and your passengers in danger. Reduce power immediately and land as soon as practical. If you’re flying a twin and can do so, shut down and secure the engine. Fires due to exhaust system failures have killed too many people. They are why there are a number of ADs calling for regular, careful inspection and maintenance of the exhaust systems of turbocharged engines.

We’re serious about this—while the ADs and awareness among A&Ps about the need for careful exhaust system maintenance have reduced the number of fires dramatically, the risk has not gone away.

After the flight it’s time for consultation with your A&P. If the cause was not an exhaust system failure, do a critical altitude check. That involves seeing if the engine will develop the manifold pressures at altitudes called out in the Airplane Service Manual. If it doesn’t make power and starts bootstrapping at a lower than expected altitude, the problem is most likely an induction system leak.

Induction system leaks may also manifest by higher than normal manifold pressure when idling on the ground. A leak may be spotted during a visual inspection or it may be necessary to pressurize the system with shop air, spray it with soapy water and look for bubbles.

Assuming that the exhaust system has truly been inspected every 50 hours, a leak is less likely than an induction system leak. Exhaust leaks are also easier to find on visual inspection as they leave stains.

Wastegates can get sticky due to lead, carbon, sulfur or coked oil accumulations. If manifold pressure seems to vary randomly, the wastegate may be going. Removing it and applying a source of adjustable air pressure can detect if it is closing smoothly as 50 PSI is approached. If not, it’s probably time for an overhaul.

We’re advised that controller problems are rare. On a twin, swap controllers and see if the problem moves. Otherwise, the poppet valve may have sludge that can be blown out with shop air in the oil return port. Make sure the upper deck reference line has no liquid in it. If it does, purge it and clean the controller’s aneroid chamber—that’s not as difficult as it sounds.

The turbo itself can go south—fortunately, that’s not high on the probability list. If that is the problem, it’s usually obvious. FOD, such as on the turbo pictured above, is easy to spot. Blades rubbing on the housing on the hot side can be observed when the exhaust pipe is pulled. A worn-out center section usually presents through oil leaking into the compressor and processing through the induction system and engine or into the turbine—resulting in oily deposits in the tailpipe and on the belly. However, oil in the turbo may be due to a bad check valve in the supply or return lines. Inspect them first as the turbo may be fine.