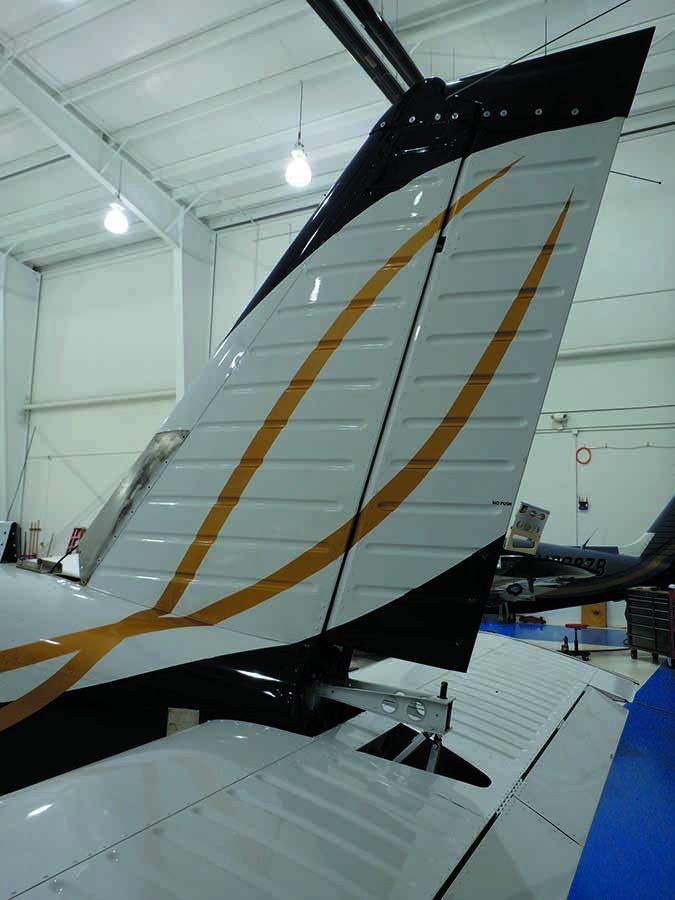 The chore of rigging the flight controls—which includes, among other things, adjusting control cable tensions—is a maintenance item that’s often neglected by owners and mechanics alike. After all, what could possibly change if the airplane has not changed?

But change it does. Parts wear out and clearances change, cables stretch, brackets warp and maintenance of seemingly unrelated systems can lead to unforeseen rigging mayhem.

At a minimum, improper rigging means lost airspeed. At worst, it can mean a lost airplane. In this article, we’ll look at the symptoms and describe a do-it-yourself process for checking the rigging on your own. The legwork could save you some shop labor.

Grab your airplane’s maintenance logs and dig for an entry that says something along the lines of: “Control surface rigging checked and found to be in conformity with manufacturer’s specifications.” We’ll bet that you come up empty.

If the aircraft has been painted, you might see wording from the paint shop that a control surface has been balanced, but this doesn’t mean all surfaces were rigged.

In some instances, an airplane may have been improperly rigged right out of the factory. If it’s never been checked, it’s still improperly rigged. An especially hard landing can cause a change in the rigging. In these situations, external damage (perhaps wrinkled skin) should be visible, but is often missed. It’s possible the damage may be more than cosmetic. Even if it was repaired, it may not be ready for flight.

One case of unrelated maintenance and rigging problems involved a Piper Lance. During the course of the repair, the nosegear and engine mount were removed for repairs. New nosegear bushings and straightening/rewelding of the engine mount was accomplished. Reassembled and with the nosewheel centered, it was obvious the rudder was slightly cocked to one side. The new repairs had corrected a past asymmetry problem, which now showed up as the cocked rudder.

Previous damage showed up during a shop inspection of a high-powered twin. It was noticed that the left aileron ground-adjustable trim tab was intentionally bent to nearly maximum deflection, and an extra ground-adjustable trim tab had been installed on the right aileron (it, too, had been bent to nearly maximum deflection). The cockpit-adjustable rudder tab had been adjusted quite far off to one side. Closer examination of the airframe revealed an extra stall strip fitted to the right wingtip.

The wing was bent—apparently in an exceptionally hard landing years before. Attempting to compensate for the asymmetric airframe, mechanics, through the years, had bent the aileron tabs to their maximums. No doubt this airframe wasn’t making full speed and its new owner was blindsided with major repairs.

The specialty tools needed to precisely analyze and adjust the rigging are expensive, but aren’t needed for a general status check by non-mechanics. There are early clues: Is the trim tab bent? Do the controls feel stiff? Does the aircraft wander about the roll and pitch axes and is it a chore to accurately trim? It can be argued that observing an aircraft’s state of trim is subjective, but there is nothing at all arbitrary about diagnosing an out-of-rig airplane.

Bring the plane to a level area of the ramp where you can run the engine. Verify the ground is level, then level the airplane laterally. You can do this using the leveling points specified in the airframe maintenance manual, although on many aircraft, you can simply put a bubble level across the pilot and copilot’s seat tracks. You could also let some air out of one main tire, provided the attitude isn’t such that you will have to make one tire flat to level the wings. Be sure the struts are equally level, and that one is not stuck extended or retracted. Don’t forget to compensate for the lack of weight in the pilot’s seat. Have someone of equal weight sit in for you.

With the airplane in perfect lateral level, adjust the turn coordinator so the inclinometer ball is perfectly centered. This could mean removing the false panel to access the instrument’s mounting screws, which are elongated to allow adjustment. Eliminate parallax (the apparent displacement of an object due to a change in the position of the observer) by adjusting the seat to the position you normally have it in flight—and your head in an equally normal position. When you are satisfied the instrument is perfectly level and the ball is centered from where you sit, retighten the mounting screws. If this is a steam gauge airplane, make a similar adjustment to the attitude indicator while it’s fully erect. You’re only concerned with lateral level here—the airplane may or may not be level with pitch at this point—so don’t be concerned with the horizon’s pitch display.

Next, make some checks outside the airplane. Get a straightedge of the appropriate length and check each cockpit-adjustable trim tab for fairness. The cockpit indicators may indicate neutral, but they may be lying. Get out and make sure they are actually in a neutral position, which is fair with the trailing edge of the control surface the tab is attached to. If there is disagreement between what the indicators show in the cockpit and the actual position of the tabs, make a note of it and mark the actual neutral position on the trim housing in the cockpit. From the outside of the airplane, make sure that the cowl flaps retract uniformly and completely. Also check for looseness. Note that some cowl flap systems are designed so that the flap trails slightly in flight. Read the manual.

Check the wing flaps and make sure they retract together and come up fairly even. Stand at one aileron-flap juncture and hold their trailing edges together. Does the outer trailing edge of that aileron line up with the trailing edge of the wingtip? If it does, is the control yoke or stick level? If you see the opposite aileron is level with the flap and wingtip, you may have picked up some valuable clues. A sagging aileron or flap may be the cause of tremendous trim drag. However, unless you have found something terribly awry, check your airframe manual before leaping to possibly erroneous conclusions. For most designs, though, the trailing edges of the flap, wingtip and aileron should fair together to form a straight line or smooth curve.

Ideally you will be flying on a smooth day because bumps will make this more difficult. Fill the fuel tanks and empty the baggage compartments. Use caution, as some aircraft are out of their balance envelope in this configuration, so you might have to compensate. Remember that you are looking to achieve lateral balance in the air. If you nearly always have passengers, then you will want to proceed to check your rigging based on a balanced lateral load (which means taking an equally weighted passenger along). If you fly solo almost all the time, check the rigging based on the unbalanced load of your fanny in the left seat.

Once airborne, accelerate to the normal cruising speed in level flight. Feel free to use the elevator trim, but leave the rudder or aileron trim tabs neutral. Come off the rudder pedals and roll the wings level using aileron (providing a wing was low) referencing the attitude instrument. With the heavy wing leveled and the skid ball centered (without your input), note the rudder trim indicator’s position and mark the exact position. Masking tape works. Note whether the heavy wing is still heavy. Chances are it’s not, or at least not as bad as it was. If it still takes some aileron input to hold one wing up, adjust the aileron trim to compensate.

Note the aileron trim indicator’s setting the same way you did for the rudder trim. On a side note, if your instructor never clued you in, this is really the correct way to trim an aircraft for level flight. Some refer to it as the tail-first method. Trim the elevator to hold proper pitch, then the rudder to get the ball centered and finally the ailerons to get the wings level. This is easier in aircraft with cockpit-adjustable trim tabs or no movable tabs. If the tabs are put into a neutral position and you still find that constant control pressure is required to keep the ball centered and the wings level, the airplane’s rigging demands more scrutiny. Its inability to fly straight and level without having one or more trim tabs deflected means it is losing airspeed to trim drag.

Fix It, Save Long-Term

Resist living with an aircraft that’s out of proper rigging because the domino effect could cause increased wear on the autopilot and other systems. Slop in control cables could put additional strain on servo motors, while greatly altering the tracking performance of the autopilot. Symptoms may include overshooting (or undershooting) when intercepting a course or approach, pitch porpoising and wing rocking. You might also observe the automatic electric trim running constantly. This is what servo overhauls are made of.

It’s difficult to say how much shop labor (and parts) it could take to properly a rig a given airframe. For a machine like a Cessna 210 or Piper Navajo, to name a couple, the teardown alone could have the airplane on the floor for a day or more. Good mechanics follow the rigging procedures in the maintenance manual and use calibrated tools to measure cable tension. There could be some flight testing, too.

Ask the shop doing the rigging if it has a complete set of maintenance manuals to accomplish the job and if it has experience rigging a given type of airframe.

Last, be vigilant when flying after major airframe repairs. We once flew a rental Skyhawk that required cross-control input to fly straight-and-level after major a wing repair. That airplane was a wreck waiting to happen.