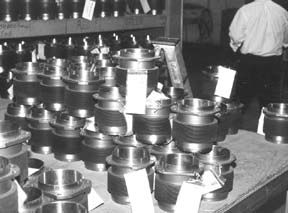 Getting an engine overhaul right means picking the cylinders right and hoping the manufacturer built in enough quality so the valves and guides wont tank halfway to TBO. Many overhauls that crump early suffer cylinder problems, thus its no surprise that reader complaints about defective jugs top the list of why overhauls come up short. Recently, weve been fielding questions and complaints about ECIs Titan line of aftermarket cylinders actually cracking and departing the airplane.

Is a massive recall in the offing? Not quite, but ECI tells us its in the final stages of addressing serious quality issues that affected a small batch of cylinders. According to ECI, between October 2002 and April 2003, the company encountered heat-treating problems with its new line of Titan cylinders for TCM engines.

ECI told us that the lack of proper heat-treating of the aluminum cylinder-head portion of the cylinder assembly resulted in 18 barrel-to-cylinder head failures in about 200 or so Titan assemblies produced within that six-month period, as of late January. According to ECI, no other cylinders were involved.

Engine Failures?
While this is obviously a serious defect, as far as we know, it hasnt resulted in any catastrophic failures that caused accidents, even though several heads cracked all the way around. In essence, that means they came loose from the barrels but this was either caught on the ground or the aircraft landed after pilots noticed obvious roughness.

Gary Garvin, CEO of ECI, reports that the lack of proper second-stage heat treating or artificial ageing of the aluminum head prior to the mating of the steel barrel to the head resulted in heads which were too hard and lacked the proper ductility. In higher horsepower engines, this caused them to be more prone to cracking, generally around the head base, to the point that they leaked compression, or worse.

According to ECIs Ed Salmeron, the companys engineering specs call for the aluminum heads to be baked in an oven at 500 degrees F for about two hours to artificially age the aluminum to increase ductility and to allow the heads to expand so they can be threaded onto the cooler steel barrels.

Evidently, an employee at ECI misinterpreted the required procedures and some heads may have been baked for as little as 20 minutes; just enough to expand them to allow threading onto the barrels but not enough to condition the metal.

This caused the aluminum heads to be significantly harder than intended, measuring from 75 to 80 or more on the Burnell Hardness scale, rather than the desired 60 to 75. The harder the aluminum is, the more prone to cracking, especially early in its service life.

Once in the airplane, cylinder max temperatures are generally in the 400-degree range, although that varies with type of aircraft and engine. Second-stage heating is obviously much hotter but its done evenly, so theres no concern about damaging the cylinders. (Depending on the alloy, aluminum melts between 1100 and 1200-degrees F but begins to lose strength at temperatures well under that.)

Garvin reports that the bulk of the defective heads cracked early-on, typically just after being put into service and well within the ECI warranty period. The first symptom was a rough running engine and/or an oil leak and corresponding loss of compression. Generally, this occurred on the number 6 cylinder on large displacement, front-alternator equipped TCM engines, as this cylinder is more subject to variable cooling.

Self Fix
Garvin says that good news is that the longer the engine operates and the more temperature cycles the heads experience as they age, the more ductile the aluminum heads become, to the point that theyre no longer out of spec. If that sounds like the defective cylinders could fix themselves, thats what Garvin said can actually happen.

Since the bulk of the failures occurred on the number 6 front cylinders on high-horsepower TCM engines, ECI voluntarily replaced all number 6 cylinders delivered during that time period and has extended warranty to users well outside of the warranty period. In addition and as an extra precaution, Garvin says that ECI has changed quality control procedures to catch such oversights. They now test 100 percent of their production Titan cylinder assemblies.

At this juncture, we think ECI has contained this problem and that it wasnt that widespread to begin with. The jury is still out on the long-term quality and durability of Titan cylinders but were not hearing many complaints unrelated to the heat-treat issue.

We were impressed with ECIs handling of the cylinder problems; we wish all companies were this pro-active when it comes to correcting quality issues. For more information, owners of large displacement TCM engines using Titan cylinders should read ECI Service Alert #03-07, Revision A. Find it at www.eci2fly.com under service instructions. Contact ECI at 210-820-8101.

Tell Us About It
Aviation Consumer is currently conducting a comprehensive owner survey on experiences with various kinds of engine cylinders. If youd like to participate, check the Surveys button or contact us at avconsumer@comcast.net.