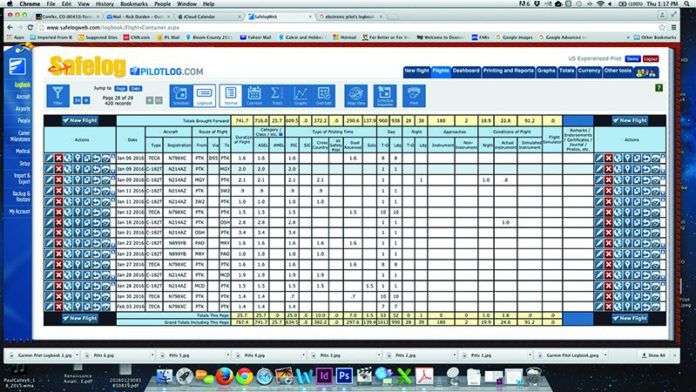 Electronic pilot logbooks have become ubiquitous in the last few years. We’ve been impressed that a lot of skull sweat has gone into making them easy to use as well as a safe place to keep something very important to you—your history as a pilot. We looked at a representative sampling and liked what we saw.

Picking a favorite proved almost impossible—especially as the type of flying a pilot does varies widely and whether a pilot wants to share details of flights on social media also varies and some of the programs have a focus on professional versus recreational pilots or at pilots who have a desire to share their flying with others. While we lean toward the logbooks offered by ForeFlight, Garmin and Safelog, we aren’t tilting too far in any direction. We think all are satisfactory and we’re glad that many have free introductory periods so that pilots can take their time picking out what’s right for them.

Here’s what we looked at, in no particular order:

ForeFlight (www.foreflight.com) has included a pilot logbook in its new Basic Plus ($99.99 annually) and Pro Plus ($199.99 annually) Electronic Flight Bag apps.

It advertises storage on its secure cloud server. We like that ForeFlight provides videos to help introduce a user to the logbook portion of the app.

As with any of the electronic pilot logbook apps, a high-time pilot is going to spend some time inputting historical data into the app. ForeFlight, as does most of the other providers, addresses the issue directly and gives guidance an options for the process, including importing flight time spreadsheets as well as from other electronic logbook apps.

Once set up, ForeFlight creates a draft logbook entry for each flight you make—you can accept it or tailor it as needed. By using the settings menu, the user can add or subtract data fields for each flight entry to track conditions or equipment important to the user such as retractable gear. The app is set up to allow electronic signature by the flight instructor for flight training. There is a library of instructor endorsements—each can be tailored by the instructor (something of significant importance to instructors). Once the endorsement is created and the instructor signs the logbook, the endorsement cannot be changed by student.

The logbook app automatically tracks currency for takeoffs and landings—and will separate touch and goes from full-stop landings—and instruments, including approaches and holds. Currency status as of the moment can be determined at a glance and the date when currency for a selected operation expires is also shown.

The logbook also tracks your pilot certificates and ratings. We noted a few small problems with the area—it doesn’t have a way of showing type ratings, and the CFI ratings on it have land and sea limitations—something the real ratings don’t have.

Safelog (www.safelog.com) is a sophisticated system that works on just about any platform on the market as well as on the web. Logbook data syncs between all platforms you use and you can access your logbook anywhere you can get an Internet connection with any browser. Safelog points out that you can access your entire logbook on a mobile device—something few other providers accommodate. For $45.99 per year (the annual price goes down with multi-year subscriptions), we found Safelog to be very user friendly, an assessment shared by users who reported on it in various aviation forums. It offers a transition service to get data from other programs and provided what we felt were clear instructions about bringing in your data.

It does not automatically record flights, however, we do not consider that a drawback as the apps that do record the time the airplane is in flight rather than the FAA-defined flight time.

We liked the logbook display and the numerous ways your historical flight data can be presented and printed out—including as a complete, hard copy logbook with an embossed cover. It’s easy to display flight data by aircraft type, N number, airports and on Google Maps. In addition, there is a troubleshooter that detects logbook issues—it can catch mistakes you make while inputting data.

The software allows you to fill out an FAA form 8710 checkride application and will import the flight time automatically from your stored data. In addition, if you want someone else to see your logbook, such as a CFI, examiner or when applying for a job, you can give permission (and withdraw it) for a specific individual to see your electronic logbook. We consider this to be one of the better programs for a professional pilot or someone who flies a great deal or in a number of different types of aircraft.

MyFlightbook (www.myflightbook.com) is a free online pilot’s logbook. It is not as sophisticated as other apps we reviewed, although we found it more than adequate for the task. It included properties that could be added for a particular flight that ran the gamut of aviation operations from skiplane takeoffs to aerial refueling, yet we could not figure out how to add aircraft category and class information. However, we liked that when you entered the N number of a new aircraft, it identified the aircraft by category and class. MyFlightbook is set up to access your logbook from anywhere you can get on the Internet and it does track your currency and medical status. There are customizable queries for looking at your flight time and you can download your logbook into a spreadsheet.

We liked that it is easy to upload imagery you captured during a flight to your logbook. That nicely supports a major feature of the software: It is designed to be easy to share details of your flights on Facebook and Twitter.

Although a number of pilots on various aviation forums spoke well of MyFlightbook, we did not find it to be as user friendly as some of the other apps.

Garmin Pilot (www.buy.garmin.com) The popular Garmin Pilot EFB app includes a pilot logbook with automatic entry of flight time and day/night conditions. With cockpit connectivity provided by Garmin’s Connext, Garmin Pilot and the electronic logbook can receive information on the flight from panel-mounted avionics and portable devices. At $74.99 for an annual subscription, we consider the price to be quite competitive.

The settings section allow you to set up detailed preferences for the logbook, something we feel is essential in a logbook app—and it allows you to put in a default taxi time for the automatic logging function as otherwise the time recorded starts with the takeoff roll and stops during the landing roll. Endorsements may be tailored by the instructor, but start out with what is considered standard FAA language. The app tracks your currency in areas that you can select and includes color-coded markers to quickly let you know if you are current in that particular area.

Excel Pilot Logbook (www.excelpilotlogbook.com) For a one-time download fee of $39, we like the Excel Pilot Logbook. It is essentially a spreadsheet that displays in logbook format and is compatible with Windows and Mac computers as well as Apple and Android devices. To use multiple devices, it is necessary to keep the spreadsheet in an app that allows you to sync files to your computer such as Google Drive or Dropbox. As this is not a web-based app, you’ll need to back it up as you would with anything on your computer—the makers recommend Dropbox. As with its competitors, the software provides flight hour summaries, currency monitoring and graphic display of your flight data. We also like that the pilot logbook display can mimic a paper logbook with the advantage of being able to customize the columns to track specific types of flight time, an advantage for those who fly multiple types of airplanes. In addition, the log will track crew duty time for Part 135 and 121 pilots.

We did not see any indication that the software had provisions for endorsements, a shortcoming, in our opinion. The website has a basic set of FAQs and how to guide to get you running.

Log Ten Pro X (www.coradine.com) This app for Apple devices works for pilots of all experience, but seems to be targeted at newer pilots aiming for a job in aviation—it’s free for your first 40 hours of flight time—and it tracks crew duty time. It allows you to select one of a number of configurations that best suits the type of flying you do—although you can choose to fully customize a configuration of data. As you progress in your aviation career, it’s easy to update the configuration of the logbook so the data fields most pertinent to you are displayed.

The system syncs between all of your iOS and Mac devices via iCloud. The website contains a number of brief videos that help explain operation of the app. While the app does not automatically record flying time, the “Fly Now” feature allows you to use your iPhone to tell it that you are getting ready for brake release and it will start a new logbook entry with the time and location using the phone’s GPS and its database of airports. After landing, another tap causes it to enter the end time and location. The logbook entry is made automatically, although you can input additional details. The app is set up to accept endorsements and print customized reports and create an FAA 8710 form. We did find pricing a little confusing—a one-time fee of $99.99 if you’re just going to use it on a Mac or an annual fee starting at $56.66 to use it on all of your iOS devices.

Logbook Pro (www.nc-software.com) has been providing logbook software for 18 years. For $69.99 for the standard software—with free lifetime updates—the program is highly customizable both for logbook columns for flight data but also for tracking currency.

Syncing with portable devices requires purchasing an annual subscription, something also required for cloud backup of your data. The program will also import an airline pilot’s schedule and trip data from various airline scheduling programs.

As we said at the beginning, we lean slightly toward ForeFlight and Garmin—because of overall value for the price; the logbooks are part of the EFBs—and Safelog because of its sophistication. Nevertheless, overall, we think there is a plethora of riches available to pilots in the world of electronic logbooks.