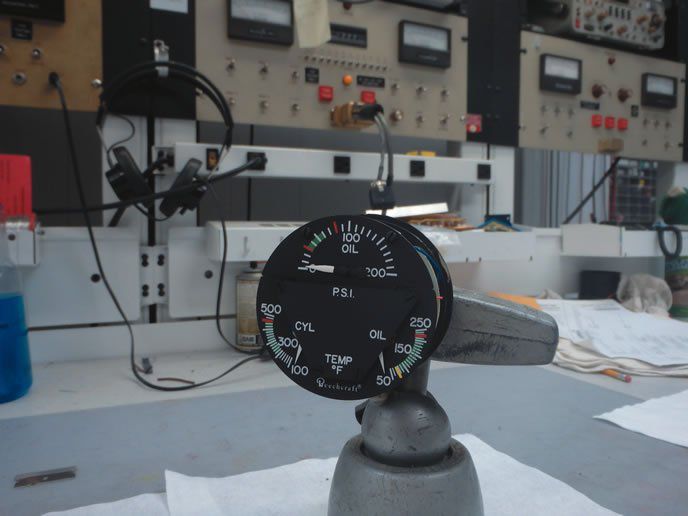 Sooner or later you’ll be faced with repairing or replacing an original-equipment engine or system gauge. It is impressive that many OEM manifold pressure, fuel flow, pressure and other gauges produced more than 60 years ago continue to function today.

But without regular maintenance, their accuracy could be compromised. One option is to upgrade to an all-in-one electronic engine display, but that requires a sizable investment that might be questionable for basic aircraft.

The cheaper alternative is to repair or replace an existing gauge. Here is a field report on available options and the limitations you might encounter.

If you have to replace an individual gauge—that is, one that displays a single function—remember that you can only legally install a replacement that is on the aircraft type certificate, or one that has PMA and/or STC approval.

Depending on the gauge’s functionality, the aircraft might not even be airworthy if it’s inoperative or missing from the panel. FAR section 91.205 covers which gauges need to be in the aircraft and functioning for VFR and IFR flight.

The replacement process goes beyond selecting a gauge that has appropriate certification. While a TSO certification could deem the gauge airworthy, it likely won’t have the precise operating range markings applicable to your specific aircraft. Some shops can rework the dial and add custom markings that match the operating range specified in the aircraft POH. In most cases, you’ll have to provide the shop a copy of this data from the aircraft POH.

Further complicating replacement and repair options (but simplifying pilot workload), manufacturers began putting gauges in clusters, both to save panel space and to simplify the pilot’s scan. At a glance, you can check critical engine and system parameters without peering from one gauge to the other.

Cluster gauges used in many popular planes built after 1950 come in different configurations, from assemblies of up to 10 rectangular-faced gauges, to round gauges with two or more integral functions. In larger aircraft, perhaps a twin-engine model, the gauges might be round and simply installed in a group and not in a cluster. In general, the more systems on an airplane, the more gauges in the cluster. Some display engine and mechanical info, while some clusters include more complex fuel quantity gauges that are switchable to display the fuel quantity in multiple fuel tanks.

While individual gauges are somewhat easier to service, cluster gauges require some thinking. Their fit, arrangement and their design are specific, plus aftermarket modifications can be difficult and unsightly. Replace one gauge in a cluster and you might have to modify other gauges to get all of them to fit. This was a problem Cessna faced a few years ago as the parts supply for older gauges dwindled. While the gauge might cost $300, for example, the extra modification work could double this.

When it comes to repairing engine and system gauges, there are shops all around the country that have in-house capability. We talked to a few of them to get the skinny on dealing with old gauges. One thing we consistently heard was that the majority of the vintage OEM gauges are getting so old there are few if any available new replacement parts.

Bruce Gammon at Mid-Continent Instruments and Avionics in Wichita, Kansas, told us its repair lab has to evaluate an instrument before it can even advise an owner what to do. Gammon noted that most of Mid-Continent’s work is repairing gauges (rather than overhauling), due to overall costs and the diminishing availability of service parts.

Like Mid-Continent, Bob Larsen with Air Parts of Lock Haven told us it buys as many of the older instruments as it can for sourcing extra parts. Of the cores Lock Haven takes in, many have usable parts that can be salvaged, cleaned or overhauled to create a like-new instrument.

Air Parts of Lock haven has built a reputation for being able to do this quite well and affordably, based on feedback from end users and maintenance shops we spoke with. It is worth noting that this remanufacturing process is completely legal, as long as the shop is an FAA Repair Station.

VIP Instruments and Avionics in Hartford, Connecticut, has been repairing engine gauges and other instruments for over 30 years. VIP’s Ed Rowley noted that while many customers send in instruments that are beyond economical repair, he can often source a like-replacement from another shop. Rowley said that while simple repairs and calibrations to many common gauges can be accomplished for around $200—which is in line with other shops we polled—some can be far more costly if they require sensors, senders or other major components. The price goes up to around $500 for an oil temperature gauge that needs a new capillary. The day we visited VIP, there was no shortage of repairs in progress, from Beechcraft engine cluster gauges, to standalone tachometers and manifold pressure gauges from Cessna models, proving that repairing old gauges is a lively business.

If an owner is lucky, a shop will have an inventory of gauges ready for exchange. This swap might take just a couple of days or sooner with pricey overnight freight.

But a complex repair or an overhaul can take much longer—up to five or six weeks—if the gauge needs to be refaced with custom range markings. The other downside is that a refaced gauge might not match the other older gauges.

Interestingly, dismantling even larger instrument clusters reveals a surprising level of simplicity. Manifold pressure and fuel flow gauges generally have no electrical connections, except for internal lighting circuitry, when equipped.

If you have a certified aircraft, you can’t replace a gauge with an automotive model. As noted, aside from not having a TSO, the dials are not marked for a specific aircraft, although there are some exceptions.

Up until a couple of years ago, American Champion was using automotive gauges in its airplanes and the dials were marked externally with tape. This was fair game because the gauges were approved via the aircraft type certificate.

One popular source for gauges is Wag-Aero (www.wagaero.com) in Lyons, Wisconsin. Wag has been keeping airplanes flying for years with economical alternatives, and it has a variety of gauges listed in its catalog, but not all are created equally. Wag-Aero’s president Bill Read told us that Wag offers two categories of instruments: domestic and imported. While many customers want products built in the U.S., some only care about price.”The imported gauges are available at a fairly significant discount compared to domestic ones. How much of a discount depends on the type and complexity of the gauge. Over the years, imports have expanded into more complex instruments,” Read told us.

If you elect to buy Westburg/Westach instruments from a supplier like Wag-Aero, you need to be careful. Based in California, some of Westberg/Westach’s instruments have a TSO, but the dial markings are comprehensive, not model specific. Its website says the instruments are made for a number of applications, including homebuilt aircraft. Pricing is reasonable, which confuses the buying decision. Wag-Aero used to brand its instruments under its own logo, but not any longer.

There are lessons to be learned from companies that no longer exist, some of which got into trouble by marking imported instruments as approved. Ultimately, the regulations state that it is the installer’s responsibility to ensure correct markings and airworthiness.

Sigma Tek (it bought Edo Aire’s GA division a number of years back)mostly deals with new instruments for OEMs. It built clusters for most of the later-model Cessnas, American General Tigers and others.

According to Sigma Tek’s Jim Hearn, the economic crunch a few years ago forced Sigma Tek to downsize its distribution system, enabling shops and end users to buy direct.

While Sigma Tek will repair or replace components in its gauge clusters, its forte is an exchange business, something that can get the airplane back in service reasonably quickly and without rewiring.

While Mitchell specializes in creating replacement clusters, all of its instruments can be mounted individually, making it fairly simple to recreate one- to eight-gauge clusters without intricate wiring. Aircraft Spruce and Specialty sells rack housings for creating a custom cluster.

Mitchell’s gauges are all electrical, using sensors and transducers to create the electrical signal for the dial. That means no fuel or oil flows in the cockpit.

Sigma Tek can create a completely new cluster, but it will take time and it will be fairly expensive since it has to fit the work in with its other tasks. Because Sigma Tek gauges are all built as components of a cluster, creating the cluster is a matter of building the case, wiring and interface plug. In older aircraft, this can require additional installation effort to rewire into the cluster’s Cannon plug.

Whether standalone or in a cluster, vintage or modern, purchasing an as-removed or serviceable instrument from an avionics shop, a hangar neighbor or an aircraft salvage operation has some caveats.

A gauge purchased from a reputable source and with a signed FAA 8130-3 airworthiness form can offer peace of mind that it was tested, plus it offers traceability and supports a logbook entry. Salvage parts—and those purchased from a buddy or on eBay—may be less expensive, but can have a dubious history.

You need to be careful when buying used or salvaged instruments to ensure it is the correct replacement for the year, model and voltage of the aircraft. Even if the dials have the correct markings, the sensors and senders might not be compatible.

When it comes to cluster gauges, we give Mitchell high marks for reliability, durability, flexibility and for minding the budget. One Mooney owner installed 14-volt gauges in his 28-volt panel. Amazingly, the gauges became sluggish, and some insulation was charred, but the gauges functioned for over one year and were still accurate.

As for price, Mitchell replacements are far less than the cost of Sigma Tek models. This is mainly because of company infrastructure and the fact that Mitchell gauges have a far simpler cluster frame assembly. A Mitchell six-gauge cluster is $750. Compare that with Sigma Tek’s price of $3185. Since Sigma Tek is accustomed to working directly with OEMs, its gauges appear more sophisticated. Installation costs will depend on the condition of the wiring and how much disassembly is required to access the wiring.

Last, before surrendering to the shotgun approach to gauge replacement, we think it’s worth sending the failed gauge to a reputable shop for evaluation and repair attempt. If you can live with the downtime, it could be the most cost-effective option if the parts are available.