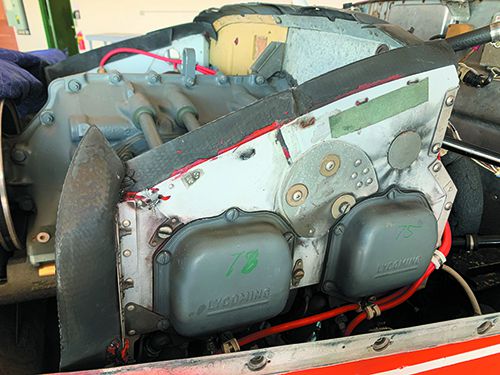 The steps for choosing the right engine oil blend are based on simple and perhaps not so simple logic. Moreover, your value drivers may add some variation, but here I try to make my thinking apparent so you can evaluate what’s appropriate for your engine and ops.

If you have a Lycoming O320-H2AD or O360E that requires Lycoming’s anti-scuff additive by AD, then consider using an AeroShell oil with TPP (aka TCP); whether straight weight or multiweight depends on the temperature stability of your area or oil change interval. Alternatively, consider using Phillips straight-weight or multiweight oil, and add Lycoming’s additive. The Phillips Victory oil solution will be less expensive, most likely, depending on how you source your oil—at the airport’s FBO, from a local oil company jobber or from a mail-order high-volume retailer, as examples.

If you have a different Lycoming engine that the AD does not apply to, consider using Phillips straight-weight or multiweight oil depending on the temperature stability of your area or oil change interval, or AeroShell’s non-augmented (no TCP/TPP) single-weight oils. Avoid the AeroShell multiweight and oils that contain TCP/TPP. If you fly less often than twice a week, consider using CamGuard ($23 per pint) to protect against corrosion.

If you fly a Continental engine with the starter adaptor, I would definitely avoid the augmented Shell oils with TCP/TPP (actually TPP now due to EPA toxicity concerns, but still called TCP in the trade due to tradition and history) and avoid the Phillips Victory oil. The TPP can adversely affect starter adapter spring operation. That leaves with you with either the straight-weight AeroShell, but not the AeroShell plus version, or the *non*-Victory Phillips blend, either straight-weight or multiviscosity oil.

Continental’s thoughts on oil use are in both Service Bulletin MHS-24 and Maintenance Manual M-0, which used to be available on its website, but are now behind a third-party paywall.

The only downside to using a multiviscosity oil per se is that the VII, viscosity index improvers, do shear over time. These are the molecules that allow the multi-weight oil to do the magic of being thicker at operating temperature than the base oil would otherwise be. If you’re a 25- to 35-hour between oil changes pilot like me, that shouldn’t be an issue. If you regularly run oil to 50 hours, and sometimes beyond, then multiviscosity may not be for you, or maybe you should consider exercising your quick drain more often. But your engine will talk to you—usually. If you never use a quart of oil in the first 10 to 20 hours, maybe allowing the oil level to drift down a quart or so from the 7 quarts or 10 quarts after a change (depending on your sump size), but then start using a quart every eight hours after that, the oil is talking to you. After that initial period, the VIIs are shearing, resulting in an effectively lower viscosity oil at operating temperature. And lower viscosity oil gets past the rings more readily, getting burned in the engine.

The viscosity index improvers (VIIs) are polymer chains, whose chemistry is made up of repetitive elements connected together. The conventional explanation (since 1958 at least) is that as the oil warms, the polymer coils unwind, making the oil more viscous than it otherwise would be at that higher temperature. More recent work suggests that is NOT true for all VIIs, but that other mechanisms are at work. What exactly the mechanism is in every case probably isn’t important to the pilot; just know that the multiviscosity oil has these VII molecules to make it thicker at temperature than an unadditized mineral or synthetic oil. AeroShell’s multivis oil is 50 percent synthetic; Phillips’ multivis oil is 100 percent mineral oil; mineral oil is a better solvent for the lead salts produced by burning leaded aviation gasoline.