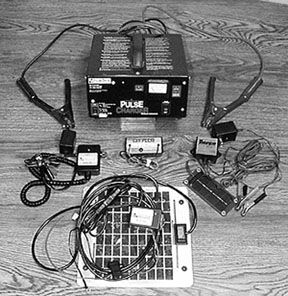 Heres a surprise: An aircraft lead-acid battery is designed to last 10 to 12 years, not the two to three years most of use as a replacement cycle. Insiders in the battery industry say that a lead/acid battery contains enough reactive material (lead) to last at least five times as long as most do.

So the loaded question is why dont batteries last longer. Why do they seem to peter out and die in 36 months or so?

The reason may be twofold. One is that aircraft batteries suffer through long periods of disuse and the other is that the natural enemy of all lead-acid batteries is something called plate sulfation, which is thought to account for 80 percent of all battery failures.

Sulfation-the actual build-up of sulfur molecules or crystals on the lead plates-is an unavoidable by-product of the electrochemical reaction which takes place in a battery. It appears as a gray/whitish crystalline crust that acts as insulation which interferes in the energy transfer process; both to accept a charge and during discharge under regular use.

Sulfation fools most common battery chargers, including ships charging systems, into sensing that the battery needs less charge than it actually does. Most overcharging woes-overheating and the resultant buckling of the plates, as well as lead plate precipitation-can be traced to excessive plate sulfation. Research has shown that the sulphur molecules attach to the lead plates tenaciously and tend to break off during normal charging, taking with them chunks of lead which eventually fall to the bottom, shorting out the plates.

Sulfation is more apt to develop in batteries which are not subject to daily use but left to slowly discharge. Sulfation is also made worse by heat. The rate of harmful plate sulfation will double for every 10 degrees F increase in temperature from the ideal battery case temp of 45 to 55 degrees F.

That means a battery located in the engine compartment-as some are-will probably die from sulfation before one located in the tailcone, where it stays cooler. Either way, in a hot climate, battery life may be shorter than in temperate zones.

Pulse Technology
Under a contract with NASA to develop a more efficient solar charging system, a Texas Instruments electrical engineer discovered that by pulsing small amounts of DC current into a battery at the rate of 10 to 20 hertz, destructive lead plate sulfation disappeared.

Moreover, it also appeared to dissolve even severe plate sulfation and although patents were granted, the product wasnt developed commercially until recently. We learned of this technology about two years ago when one of our A&Ps discovered a simple 115-volt trickle charger marketed as Battery Doc, a battery cleaner and restorer. We were skeptical but connected it to an old motorcycle battery which would no longer hold a charge. Two weeks later, pulse charger had brought the dead battery back to normal and it has been in service for a year.

We then tried this unit on several marine and aircraft batteries with virtually the same results, leading us to conclude that there may be something to this pulse charging business.

The Alternator Connection
As a busy shop, we see a lot of aircraft in for repairs of the battery charging system, either alternator replacement or voltage regulator work. These sorts of chronic failures had been blamed on various factors such as excessive vibration, changes in altitude and infrequent use.

But sulfation may be part of the problem. Since aircraft batteries arent used nearly as frequently as car batteries-at least for most owners-could correcting it also solve chronic charging system problems?

Its an intriguing question and one the battery industry has taken notice of. Were told that batteries incorporating this technology-electronic or smart batteries-are on the drawing board.

Teledyne Gills VP, Dan Rankin, told us pulse technology has worked in the companys initial testing and that more research is underway, probably to implement pulse technology in a battery with a built-in de-sulfator of some kind.

Innovative Energy Systems is based in Maryland and produces a line of automotive and marine solar products, including an automotive/marine/recreational pulse chargers and de-sulfators.

Their line of de-sulfators come in various models which can be powered by the battery itself, a solar panel, or 110-volt line current. These are easily adaptable to aircraft batteries.

They also own several patents and claim to produce units which dial-in exactly the pulse frequency of the sulphur molecule, greatly enhancing effectiveness. Solar Tech, doing business as Can-Pulse Inc., is a smaller Winnipeg, Canada-based concern which markets under the name of Can-Pulse.

The largest of the three, PulseTech, seems better at marketing, having developed a unique line of dual powered (solar or 115V) battery maintainers called Solargizers.

Maintainers are meant to be installed for full-time use with the vehicles charging system. While these products are billed as maintainers, all three have brought back dead batteries to normal service.

For the most part, these devices are designed to fit into battery compartments or near the batteries when mounted permanently on-board. The on-board models typically connect to the battery via smallish 18-gauge wire w/large lugs designed to go right on the battery terminals.

Depending on the manufacturer, for temporary use, the owner is expected to improvise by replacing the lugs with alligator clips. Most models also have small LCDs showing that they are not only hooked up properly and making connection, but also pulsing.

Depending on the manufacturer, the costs for individual pulse battery cleaner/maintainers run in the $90 to $200 range. Several sources offer commercial or full-size shop pulse chargers in the $600 range.

While the self-powered (via the ships battery) units are sold as being full-time maintainers, approving one for installation permanently on anything other than a homebuilt is a problem, of course. Obviously, no FAA approval is needed for temporary desulfator installation, which can be either solar or 110-volt powered.

Think of pulse technology charging-we use the word cautiously as typical pulse maintainers are not actually chargers-as sending low-powered DC current to battery in a rise time of less than 3 nano-seconds with a defined pulse width. The pulse frequency is not critical to the process. But the rate of rise or sharpness of the sine curve may be. The pulse frequency is between 2 kHz and 20kHz, depending on loading and power supply voltage used.

In theory, individual sulfur molecules are freed from the crystal formations and are now ready to be charged and returned to solution to form an active electrolyte. The pulse process requires very low energy input to the battery, primarily because each molecule is being individually energized enough to dissolve and liquefy the sulfur crystals encasing the lead plates, not charging the battery.

According to the manufacturers, this low energy also means that the pulsing action will never damage the battery itself, no matter how long its subjected to it, hence the device could be-and for best results should be-connected indefinitely.

Field Reports
The military is a big user of pulse charging technology and some government agencies are also employing it for vehicles kept in long-term storage.

One senior Army officer we spoke with told us of one study in which 240 vehicles, including Patriot missile launchers, had been stored outdoors for some nine months. Upon starting these for deployment and training, as many as 80 percent of the batteries failed to perform. Yet with Solargizers in use, the failure rate after the same storage period dropped to 20 percent, with fewer requiring new batteries.

Other than anecdotal evidence such as this, the independent controlled scientific research on these products is relatively sparse. Variations have been in use in the marine industry for quite some time.The users we talked to reported good results, with only an exception or two.

Although we were able to bring a battery back from the dead, worth noting is that these products arent intended for that purpose but for long-term battery maintenance. If you want to try battery rescue on your own, get an old motorcycle battery with a clear case. You can see the desulfation as it occurs. (If it occurs as it did for us.)

Conclusions
Tracking the life of an aircraft battery is difficult at best. Without an indepth controlled study that pegs some kind of average battery life with dozens if not hundreds of examples, its hard to know how long the typical battery might last. But field experience with pulse charging is too intriguing and positive to ignore, in our view.

Besides the obvious economic benefits of not having to buy annoyingly expensive batteries every few years, pulse maintenance technology probably benefits the charging system, too, since a sulfated battery is hard on the alternator and regulator. While a full-blown state-of-the-art maintenance shop type pulse charger (about $600) isnt practical for an aircraft owner to acquire, a smaller automotive unit certainly is.

Some of the units we evaluated lend themselves to on-board aircraft usage in the form of either a temporarily installed unit (Velcro or tie-wrap) which is then disconnected or removed prior to flight. Just to be on the safe side, the circuit should be fused at the battery, with a 5-amp line fuse, maximum. If you have a hangar, obviously the 115-volt choice is better. In a tiedown, the solar version is the favored choice. It is weatherproof so the challenge is to find some easy means to connect and disconnect it quickly.

We dont recommend the type of pulse maintainer that operates off the battery voltage itself. Although these draw a tiny amount of current, they could reduce cranking power for an airplane thats seldom used.

Coy Jacob is an Aviation Consumer contributing editor. He operates the Mooney Mart in Venice, Florida.