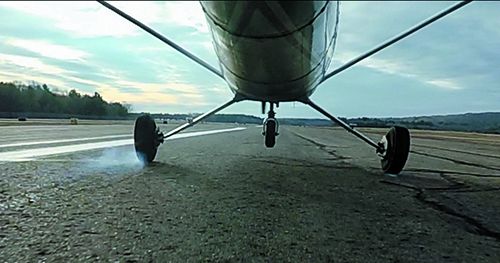 Stupid pilot tricks, anyone? Here at the magazine some of our test aircraft for sending portable products through the wringer are Cessna 150s and 152s—seemingly the best combination of budget-friendly economy, durability and simplicity. Flying and filming the Faro Stealth headset in the 150 for the field report in this issue got me thinking about the hard-as-steel insurance market, and how we bust airplanes. Even simple Cessna 150s.

The photo down below is a tailcam capture of yours truly putting the airplane down for the day after a headset testing session. Forget that I’m off the centerline. The smoke plume coming off the left main is my size 10 day-hiker resting on the left toebrake as I plopped the Cessna on the pavement, lips narrating on camera and a left leg draped with headsets. Add to the mayhem the MyGoFlight camera mount that lost its suction and came crashing down in the flare. I now understand why pilots who’ve flat-spotted a new Michelin to the point of blowing it out (I didn’t, thankfully) are dumbfounded as they watch the tug pulling the airplane off the runway and to the nearest maintenance hangar.

Maybe my on-the-job stupid pilot tricks will save someone some new rubber. I confessed my sloppy stick and rudder to Senior Editor Rick Durden, who suggests calling out “heels on the floor” before crossing the threshold. While I’m at it, I’ll call “cut” and consider ditching the test products from my lap before getting close to the ground. Man, what a mess. But when it comes to stupid pilot tricks, I’m in rotten company at least according to some of the wreck reports we salivate over when preparing the monthly Used Aircraft Guide. There are some doozies.

Sometimes it’s best not to touch anything, as was proven by the pilot of a Columbia who, according to the NTSB, on climbout spotted a carpet strap hanging out the door. The POH strongly warns to not open any doors in flight, but when he did the door was violently pulled from his hand, came off the airframe and smacked the wing and tail. Insurers paid big bucks to repair the busted composite and a lacerated hand. If pilots don’t have enough tricks up the sleeve, sometimes the folks who wrench the airplane can help, while a chain of calamities finish the job.

That was in one report when the pilot of a twin Cessna fetched the airplane from a shop after an engine repair, only to ferry it to another shop to have uncompleted landing gear work done. With the problematic landing gear down, the repaired engine lost all of its oil and failed. No, even with the propeller in feather a Cessna 310 won’t hold altitude on one engine with the landing gear extended. But it will ding the insurance claim. But maintenance troops aren’t always to blame. One pilot decided to ferry his Cessna Skymaster for maintenance after the interior—and fuel tank selectors-—had been stripped out. The idea was perhaps to save some shop teardown labor, but it ended up costing the insurance company when the airplane ran out of gas because the pilot couldn’t switch tanks.

For more lighthearted reviews of stupid pilot tricks worth etching into the learning bank, I’ll plug the January 2020 issue of sister publication IFR Magazine, which each year dedicates a full article on the topic.

Speaking of January 2020, the date on this issue of Aviation Consumer matches the long-dreaded ADS-B Out deadline. Rest assured, our coverage won’t stop. You haven’t seen the last of products and accessories that support the equipage mandate, but we need your help. If you still haven’t equipped, we want to know about scheduling, costs and even more important-—if you have equipped—how your existing gear is working in the system. If you have to work your way through ADS-B airspace and the airplane doesn’t have ADS-B Out (or your system isn’t working), give us a field report.