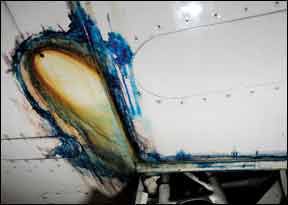 One of the unfortunate side effects of slow aircraft sales has been an erosion in the maintenance base. Many smaller shops have disappeared and some of those that remain are either losing the ability to do some kinds of work or are just declining to accept it.

One maintenance procedure on the chopping block has been the resealing or repair of wet wing fuel tanks, especially in Mooneys, but in a few other models as well. At best, repairing weeping wet-wing tanks is a dark art, at worst, it’s something some owners say they have to have done several times to stop the leaks, if even the leaks can be stopped.

There are a few solutions. One is to find a shop that can spot repair otherwise sound tanks and back up the work, another is to strip the tanks back to bare metal and reseal them and a third is simply line the wet wing bays with neoprene bladders. Each approach has its merits.

Shops
Although not many shops take on tank work, two that do are Weep No More LLC in Minnesota and Florida Flight Maintenance, in Venice, Florida. Weep No More is an outgrowth of Willmar Air Service in Willmar, Minnesota, a long-established and respected Mooney dealer and service center. Florida Flight is also a well-known Mooney center based on an airport with a long Mooney connection. (Either shop can handle any kind of wet wing tank work.)

Weep No More’s Paul Beck developed his tank sealing process while working for Willmar, but now has established his own business. He’s also able to travel to the customer—world wide—to repair spot leaks, but full resealing has to be done in his Minnesota shop. Florida Flight does all of its tank work in Venice.

Depending on who you talk to (and how much they’ve recently spent on tank work), wet wings are either the worst idea in aviation design or not nearly as bad as everyone thinks. Mooney has traditionally used them because they’re light and relatively accessible in the design’s single-piece wings. Other models, such as Piper’s Cherokee, have split wings and/or the fuel cells are accessible and can thus be removable aluminum or bladder-type tanks.

Wet wings usually fail somewhat gracefully, beginning with a slight odor of fuel around the airplane or in the cabin and evidence of blue stains caused by weeping. The condition only grows worse with time.

The main failure mode seems to be deterioration of the sealant caused by aging and, at least in Mooneys, hard landings. The landing gear is attached to the spar in the area of the tanks and the rubber donuts Mooney gear legs have don’t offer much damping. Years of landings, with a few hard ones thrown in, can flex the structure enough to loosen old sealant, kicking off the leak process. (You’ll sometimes see bits of sealer when sumping the fuel.)

Mooney tanks also develop leaks toward the front of the cells, producing staining visible from inside the gear wells.

Minor leaks can be repaired, but after one or two attempts, a reseal may be the best option. “I usually base it on the age of the sealant,” says Paul Beck, of Weep No More. “It’s pretty much back to the J-model. If you’re back in that vintage, you might want to think about a reseal. If you’re newer than that, you might not need it,” Beck says.

Both Florida Flight and Weep No More use a similar strategy to track down leaks. It involves drawing a vacuum in the tank, noting where air bubbles appear, then spot sealing that area. The tank has to be drained to complete the repair.

Full Reseal
Even well-known Mooney shops like Don Maxwell Aviation in Longview, Texas, won’t tackle reseal work, which Maxwell describes as the worst job in aviation. All of the work has to be done through small access panels, requiring the flexibility of a contortionist and the patience of a saint. Maxwell does a couple of tank repairs a week, but sends reseal work to Paul Beck at Weep No More.

“You just have to find that special guy to do it and I just haven’t found him yet. It’s hard on a fat boy to get in those positions anymore,” Maxwell jokes.

The reseal job requires taking the tank interior down to shiny bare metal then applying fresh sealer, which is itself a three-part process with a day of curing for each step. It can’t be rushed and haphazard work will bring the airplane right back for a fix. (All the shops offer warranties of their work.)
While he was at Willmar, Beck developed a clever process that sprays a stripper called PolyGone into the tank cells. PolyGone is a non-corrosive, water-soluble solvent specifically designed for polysulfide sealers.

Lots of Stripper
Beck’s process uses hardware sort of like a purpose-built lawn sprinkler to douse the inside of the tank with Polygone. Drains at the bottom of the fuel cells collect the stripper and loosened sealer and a pump re-circulates the stripper. Tank stripping can thus be largely completed automatically in a day or a little longer for tanks that have accreted years of patches.

Other methods include mechanically scraping the old sealer out or using a combination of both methods, which is what Florida Flight does.

Whichever method is used, the cost will be similar—a range of $6500 to $8000, again, depending on the condition of the old sealer.

Bladders
What’s involved with bladders? Essentially abandoning the wet wing tanks and stuffing vulcanized neoprene bladders through the access panels. For the Mooney, these are available up through the J-model and although they used to exact penalties in both reduced fuel and higher empty weight, a new system from O&N Aircraft Modification retains the J-model’s original 64-gallon capacity at weight penalty of about 30 pounds. This requires eight bags, total, and lists for $8000. However, Don Maxwell says he advises customers that bladders and a reseal come out in about the same place pricewise. One good thing is that old systems limited to 54 gallons can get the 10-gallon upgrade for $2650 list, plus the labor.

Maxwell has done the bladders, but doesn’t push them. “I usually recommend that a strip and reseal is best. They used to have a price advantage over strip and reseal, but now they’re about the same price. Some people want the bladders so their local mechanic can take one out and get it fixed if it leaks. Everyone is used to bladders,” says Maxwell, who is one of 10 shops that do the O&N bladders.

Our view is that bladders make sense only if you’re not weight critical—in other words, you don’t need much payload with full fuel—and you simply don’t trust a resealed wet wing. Otherwise, if you’re going to keep the airplane, a properly done reseal will enhance the airplane’s value and probably last as long as you own it. You can keep the 30 pounds of payload.

The other side of the same coin is that a 30-year-old airplane that hasn’t been resealed but whose logs show evidence of leak fixes should be viewed somewhat warily in the pre-buy. Factor in the cost of a reseal or bladders because at that vintage, the tanks are holding fuel on borrowed time.