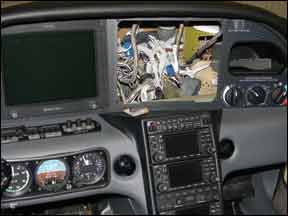 While stepping up to a glass panel may appear to offer lower maintenance bills and downtime, it’s just as likely that when the all-in cost of ownership is added up—including data revisions—glass could cost more than a well-kept steam gauge panel. Glass ownership is fraught with unexpected costs that many owners seem unprepared for.

Routine costs might include optional upgrades, which offer system improvements and additional features. Some of these are free through manufacturer-provided software downloads, but cost several hours of billable shop labor to perform. For aging systems, some repairs could run thousands of dollars, especially if you haven’t purchased an extended warranty. In this article, we’ll take a look at some of the maintenance issues you might expect with glass panel ownership.

PERCEIVED RELIABILITY
We’re often asked if glass panel upkeep is cheaper than traditional instruments. The answer isn’t easy and often depends on the existing instrumentation. For example, complex autopilot gyros, such as the Bendix/King KI256 Flight Director and KG102A remote heading gyro, might cost thousands of dollars each for overhaul exchange, while a plain-vanilla Sigma Tek horizon gyro might only cost a few hundred dollars, plus labor and freight costs.

When we conducted our glass panel owner survey in 2009, 41 percent of the respondents reported lower than expected maintenance issues. That may not be the case now. To get a feel for more current trends, we recently spoke with several avionics shops and Cessna service centers. All reported an increase in glass panel maintenance issues, including AHARS component failures, software corruptions and engine monitoring sensors. Some attributed the trend to the aging fleet of glass panel aircraft. The dual-screen Avidyne Entegra glass suite appeared in Cirrus and some Piper models around 2003, while Garmin’s G1000 was offered in 2005 and beyond. The G1000 easily outnumbers the Avidyne Entegra suite, present in everything from Skyhawks, Bonanzas and Barons to Diamond DA20s. In our survey, roughly 8 percent of Avidyne Entegra owners had major service complaints, compared to roughly 6 percent for Garmin owners. We’re planning another survey to freshen up those numbers.

If you’re eyeing the used aircraft market, destined for an existing OEM-equipped glass panel, we suggest focusing a sharp eye on the system’s maintenance history. This should include verifying software and hardware updates, while considering if its been upgraded to WAAS—an upgrade that can have a staggering bottom line, given the required antenna mods, plus GPS receiver and software upgrades that might be required for most systems.

The aftermarket includes a variety of retrofit glass systems, from the stark but technically complex Bendix/King KI825 and Sandel SN3300-series EHSIs to the popular Aspen EFD1000 and Garmin G500 and G600 PFD systems. Each of these systems requires regular maintenance with varying degrees of complexity. They’ve also evolved substantially. Bringing older flavors up to current standards might yield a sizeable investment. In our view, a thorough avionics inspection should be accomplished by a qualified shop during the prebuy inspection.

Airworthiness
Did you know that the components in a glass avionics suite need yearly inspection? If not, you aren’t alone. An important document that chases a retrofit—and one that’s often overlooked—is the Instructions for Continued Airworthiness, or ICAW. This might be found in the systems flight manual supplement and provides specific guidance for maintaining the system on a yearly basis. While the ICAW deals mainly with inspections, it might also address mandatory component replacement.

For example, the internal backup battery in the Aspen EFD must be tested once every 12 months and replaced every 3 years or 800 hours. The RSM, or remote sensor module, that’s part of the Aspen system should be visually inspected for damage and wear, including the sensor’s lightning suppression strip. In most aircraft, this sensor is bolted to the top of the fuselage where it endures the elements just as antennas do. We suggest looking at it during every preflight walk-around.

The ICAW for most glass suites provide guidance in checking for damage, chafing or excessive wear of harnesses and structural integrity of remote components. Sound trivial? Think again. We know of an airplane in which the glareshield chafed through the static line going into the Aspen’s air data computer, causing failure while flying in IMC. Regular inspection—and a correct installation in the first place—would have avoided this damage.

PITOT-STATIC INSPECTIONS
Forget the rumor that glass-cockpit-equipped aircraft are immune from biennial IFR pitot and static system inspection—FAR 91.411 still applies. Glass panel aircraft usually have pitot-static systems and a traditional altimeter, both of which require certification. Further, most PFD-equipped aircraft have an air-data computer. This remote box or self-contained component within the display, as it is with the Aspen EFD1000 PFD, handles nearly all of the altimetry and airspeed computations, based primarily on pitot and static air input. Air-data computers feed pressure altitude, or Mode C data, to the displays and any other boxes needing pressure-altitude input.

Each manufacturer has its own guidelines and procedures for testing their systems. Aspen has an air-data alignment and calibration tool for its display. If your shop finds that the system is out of tolerance, they’ll need to calibrate it using this software tool.

Since the PFD has both pitot and static inputs, leak-checking is part of the drill. This testing must be accomplished on initial installation and whenever a display is replaced.

Electronic display of flight instrumentation might be more reliable and accurate than old-fashioned steam gauges. But some of this data is only as good as the pitot-static system. For this reason, thorough biennial inspections on glass airplanes are essential.

NAV DATA NITS
Glass panels require no shortage of navigational data—a major source of dissatisfaction for most owners we speak with, with Jeppesen taking a brow-beating for the costs of their subscription services. In our last survey, nearly two-thirds of glass cockpit owners said they purchase the revision on a “grin-and-bear-it” basis, while 29 percent termed the revisions worth it and a good value.

We heard from one disgruntled owner who calculated that his data costs average $2500 per year. His airplane has dual GNS530 navigators, a GMX200 MFD, Garmin G500 retrofit PFD and a portable GPS. He admits that updating the data in this glass suite is almost too much to manage, given the number of different databases that need to be downloaded and then uploaded into the equipment. Many of the updates won’t even transfer to his Mac. The Garmin G1000 might be easier to manage, since it uses a single nav data subscription that costs around $500. You’ll also need to consider how often you’ll update the terrain and obstacle data. Another glass cockpit owner flagged us down in the Jeppesen tent while at AirVenture. He was elated—sharing his experience of a successful and ornery haggling session with Jeppesen for the renewal of the data that’s required for the Entegra glass suite in his Cirrus. According to him, Jeppesen saved him a few hundred dollars over his existing subscription cost, calling it a show special. Maybe a trip to Jeppesen at one of these shows may be worth your while. Thinking of upgrading your Aspen display to ESV synthetic vision? This requires a Jeppesen database for mapping the synthetic terrain. It costs a few hundred dollars per year, above and beyond the initial $2995, per display for the ESV software.

While some of the software updates that are available for a glass suite are provided by the manufacturer for free, most shops charge their standard hourly labor rate to load the software and revise the aircraft paperwork. You should ask about this when you request a software patch.

DO YOUR HOMEWORK
The new owner of a first-generation Cirrus underestimated the upkeep that might be required with the older retrofit glass displays in his airplane. The jaw-dropper came when he upgraded one of his GNS430 navigators to WAAS. Turns out the software level in the Sandel EHSI was incompatible with WAAS, requiring a $3000-plus software upgrade so it could display GPS VNAV data. Another owner of a G1000-equipped Columbia learned that the unlock card for the onscreen approach plates was missing. It took nearly a year to get this squared away with the previous owner so he didn’t have to pay over $2000 for a new unlock card.

He also learned that working with a maintenance shop that’s trained for supporting this complex glass suite is as valuable as the extended warranty he purchased. It’s paid for itself in a couple of visits to their shop.