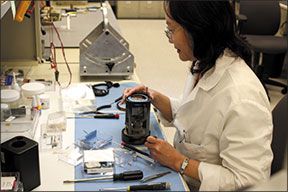 Here’s a common scenario: You bring your airplane to the avionics shop for its 24-month IFR pitot and static system certification and the tech says you’ll be wheels up in a couple of hours. Thirty minutes later while you’re cooling your heels in the pilot lounge, the technician tracks you down with news you don’t want to hear: Your encoding altimeter flunked the test because it has too much friction.

With dollar signs dancing in your brain, the technician rattles off your options and none of them are easy or cheap. What’s an owner to do? Send the altimeter out for overhaul? Order an exchange replacement? Attempt a repair? You could of course do nothing and limit your flying to VFR, with an altimeter that can potentially kill you (we strongly suggest avoiding that option).

Despite the popularity of retrofit and OEM glass panels, we still need to deal with conventional mechanical flight instruments and their imminent failure. Unfortunately, repair and overhaul pricing is on the rise. Here’s a look at the market and some tips on dealing with round-gauge instrument maintenance.

Rebuilt or Overhauled?
There is a difference. FAR 43.2 says, in part, that no person may describe in any required maintenance entry or form a component being rebuilt unless it has been disassembled, cleaned, inspected, repaired as necessary, reassembled and tested to the same tolerances and limits as a new item, using either new parts or used parts that either conform to new part tolerances and limits. To sign a component off as being overhauled, nearly all of the above applies, except testing it to new part tolerances.

For clarification and for an explanation on how the regulations apply to instruments, we spoke with the Mid Continent Instrument and Avionics Van Nuys, California, branch manager Bryan Miner. Mid Continent, which employs nearly 200 people in two locations, operates one of the largest instrument overhaul and exchange programs in the world (overhauling or exchanging over 15,000 units each year). When signing off most instruments, it appropriately uses the term “overhaul.”

“Whether it’s a gyro or an altimeter, we generally don’t represent work performed on them as “rebuilt.” We do tear the unit all the way down and clean everything inside, while replacing any component that needs to be replaced,” Miner said. Miner also pointed out that “rebuilding” is a term used by a manufacturer. That’s because it has the capabilities to bring a unit to new standards. Mid Continent does have these capabilities because it produces its own line of electric gyros and other instruments and accessories.

Properly overhauling a gyro includes replacing the bearings and any worn mechanical parts. It also includes disassembling the rotor assembly, while replacing any worn parts in it. It should also include calibrating the electronic outputs, if the instrument drives an autopilot. In some cases, it’s worthwhile to have the shop align the newly overhauled gyro with the autopilot flight computer it interfaces with. These are fine adjustments that command proper autopilot bank angles, roll rates and flight director command bar presentation. Performing this alignment could be the difference between an autopilot that flies perfectly or one that’s sloppy. You’ll likely pay additional bench labor for this service, but it could save you a trip back to the shop to have the alignment done if you discover the autopilot doesn’t fly properly.

Repair Option
As an alternative to a full teardown overhaul, some shops might offer a repair option. During our research, we got mixed signals from different shops on whether repairing an instrument makes better sense than an overhaul.

Ed Rowley, a principal and instrument technician at VIP Instrument and Avionics in Hartford, Conn., has seen enough ailing gyros in his 35-year career to believe that performing repairs, instead of overhauls, could make economical sense for some instruments. When we visited the shop, we saw several specialty instrument benches overflowing with work, a trend Rowley said is steady, despite retrofit PFDs.

“There are still an awful lot of gyros and aneroid engine gauges out there that need to be serviced. The reality is that the economics of fixing these basic instruments is much more digestible than upgrading to even a basic PFD, like the Aspen Evolution system,” Rowley said.

Rowley might perform a repair to an instrument on a case-by-case basis. First, he’ll inspect it.
“There are things that can go wrong with an otherwise high-quality instrument, like the Sigma Tek 4000B-series directional gyro, that don’t warrant a complete overhaul. In some cases, simply replacing the caging springs with more durable ones is all that may be required,” Rowley told us.

The key here is to find a shop that has the knowledge and experience to accurately evaluate the instrument in hopes of spotting future failures. If a gyroscope has worn rotor and gimble bearings, for example, an overhaul makes the most sense.

The other consideration is warranty. Typically, a repair is covered for 90 days and only includes the work performed during the repair. The standard instrument overhaul warranty is generally one year. You could spend $150 on a basic repair today, but might ultimately have to pay for a $500 overhaul next week, for example. That’s why for basic instruments, we think an overhaul makes the most sense—especially while the instrument is opened up. Mid Continent’s Miner agrees.

“For an air-driven gyro, it’s usually not economical to simply replace a couple of the gimble bearings, given the level of teardown that’s required to gain access. We feel we’re not providing the customer a good service by charging them for half of an overhaul when we just don’t know how long the rotor might last,” he explained.

VIP’s Rowley noted that upgrading to electronic-based solutions instead of spending a lot of money to overhaul complex and expensive traditional gyroscopes can be more appealing than a repair or pricey overhaul. An example of this is Aspen’s EA100 and Garmin’s GAD43 autopilot gyro emulators. These digital converters completely eliminate select spinning autopilot gyros, taking a digital feed from the AHARS and inputting pitch and roll commands to the autopilot—with far more precision than an aging gyroscope—and with far less upkeep than a spinning gyro will require.

Still, these are major avionics upgrades. A single-screen Aspen Evolution with EA100 gyro emulator can approach $20,000 and as the sidebar on page 7 explains, you’ll still need backup instruments, including an attitude gyro.

Try as they might, Aspen has been unsuccessful in getting their system approved for installation without a backup attitude gyro. It all comes down to a common mode source issue. Aspen’s PFD and reversionary MFD operate off an air data computer that’s plumbed into the aircraft pitot and static system, so in order to have an independent backup, that system needs to have a different source of operation. That would send Aspen back to the drawing board—a task that would yield little return.

As we reported in the January 2013 issue of Aviation Consumer, there are EFIS backups that might be eligible for backing up to retrofit PFD, including the L-3 Avionics Trilogy EFIS. There’s also the RC Allen RCA2600-series digital attitude indicator, made by Kelly Manufacturing. We’ll look at the redesigned version of this instrument in a future article.

Out with the old
If you’re lucky, the instrument in your panel is eligible for an exchange or overhaul. In most cases, this is dependant on the availability of parts to perform even simple repairs. We can’t come close to naming all of the various models that have become extinct, due to the lack of replacement parts. In these cases, you’ll be faced with purchasing a new outright replacement, since the unsupported instrument has no core value.

It’s important to note that even if your instrument is still supported, it might not be eligible for an overhaul or exchange. If the instrument is missing a data identification tag (listing the original part number and serial number), you could get stuck with buying a new instrument. Similarly, if the removed core is found to have excessive corrosion or damage, it will likely be rejected as an acceptable core.

Nearly every shop we talked with recommended new Sigma Tek models for replacing attitude and directional gyros, and models from United Instruments, for replacing altimeters and airspeed instruments.

If you’re faced with replacing an airspeed indicator (a source of pitot system leakage), you’ll likely have to order a new United model and rest the old one on your bar shelf as a conversation piece. Several shops told us there’s no support for some original-equipment Piper and Beech models. The shop needs the airspeed range marking data from aircraft flight manual to set up the new instrument appropriately.

Sigma Tek offers a variety of replacement gyros, including models with vacuum warning flags, internal lighting and heading reminder bugs, for directional gyros. They also make models that will drive the heading command function on autopilots.

This might also be a good time to think about your long-term instrument layout and the source that drives it. Doing away with the vacuum system could be an option in some PFD installations. Doing so means buying an electric attitude indicator to back up the PFD. Which model you choose could depend on the STC requirements of the PFD. For example, Aspen’s Evolution STC requires a standby attitude indicator with a separate power source, which is a backup battery. But that doesn’t mean the Aspen STC gives you the green light for removing the pneumatic system, either. The STC makes it clear that removing it isn’t covered. You’ll need to consult your shop to see how they plan to sign off a vacuumless installation.

Labor and Freight
Since many avionics shops farm out instrument work, there will likely be freight costs associated with the work. Fragile gyroscopes need to be shipped in larger containers to keep them safe during transport. The resulting costs can add hundreds of dollars to even basic instrument maintenance. If you’re in a hurry to get the instrument out and back, freight costs can be shocking. There are also labor costs.

While some aircraft panels are easier to work with than others, it could take sizable disassembly to remove and replace a single instrument. This means downtime and labor costs that could approach the cost of the instrument. That’s reason alone not to skimp on instrument maintenance. The money you save on a shoddy repair could get eaten when you have to pay to have it removed sooner than you expected.