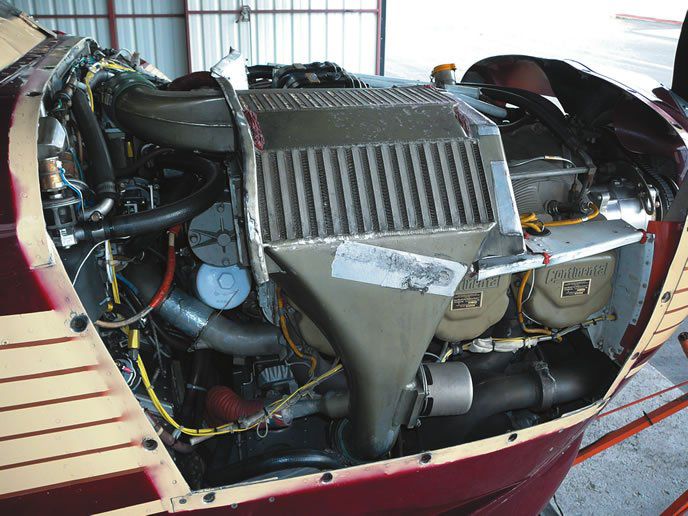 The idea of stuffing more air into an engine to increase its power output is anything but new. Mechanically driven superchargers have been compressing ambient air and feeding it to engines since at least 1885, with their exhaust gas-driven offspring, turbosuperchargers (often shortened to turbocharger or turbo), since 1905. The first turbos were installed in combat airplanes in World War I to increase their performance at altitude.

While feeding compressed air to an engine means it can burn more fuel and develop more power, there are, of course, limits to this good thing. When a gas is compressed, it gets hotter. Hotter air coming into the engine means the fuel/air mixture is hotter and the heat increase during combustion means that the engine will be running closer to its detonation limits and cylinder head temperatures and pressures will be higher, potentially reducing cylinder life if CHTs cannot be kept in line.

Naturally, someone realized that if the hot air coming out of the compressor could be cooled before going into the engine, there would be a quadruple benefit—the engine would still put out more power than it could breathing ambient air, the detonation margin would increase, engine life would increase and the engine would put out even more power because it was inhaling cooler air (remember what happens when you pull the carb heat knob).

In 1926, 23-year old Indy racer Frank Lockhart developed and patented an intercooler for his supercharged Miller racer. Even though it added some 55 pounds to the weight of the car, the added power allowed him to smoke his competition.

By World War II, intercoolers were found on most supercharged and turbocharged airplanes. After turbocharging came to general aviation in the 1960s, intercoolers, as aftermarket mods and standard equipment soon followed. We like them.

An intercooler is nothing more than an air-to-air heat exchanger or radiator. The design goal is to keep the weight to a minimum while making it big enough and efficient enough to reduce the temperature of the compressed air coming out of the compressor side of the turbo to something approaching what the engine would be breathing on a standard day at sea level.

As was explained to us by George Braly of Tornado Alley Turbo, a company that makes turbo-normalizing mods that include intercoolers for the Beech Bonanza, Cirrus SR22 and Cessna 177RG and 185, there’s no free lunch. When an intercooler is doing its thing, it creates back pressure for the turbo compressor, forcing the turbo to work harder, which means the waste gate has to close a little bit more. That increases exhaust back pressure and that reduces the volumetric efficiency of each engine cylinder. The result is that the improved number of molecules that go into the cylinder with the denser air is offset by the reduced volumetric efficiency.

While that sounds like a zero-sum game, Braly pointed out that there is published research going back decades showing huge improvements in detonation tolerance, and thus more available power at higher altitudes, from the use of even a modestly efficient intercooler.

The detonation margin improvements mean that a pilot is less likely to damage the engine because of momentary inattention to power settings during climb. That’s a big deal for turbo systems that require that the pilot keep close track of manifold pressure and mixture during climb.

To our knowledge, all of the factory-installed and aftermarket intercoolers give more than they take—they reduce the temperature of the air coming out of the compressor more than they increase it due to the back pressure they generate.

In researching this article, we learned that companies are steadily developing more effective intercoolers. We also learned that bigger is better—more cooling can be obtained with minimal weight gain. A number of aftermarket mod companies have progressively developed more efficient and effective intercoolers over the years, so an owner seeking to replace an existing intercooler may find that the new one is measurably better than the existing one.

We recognize that there is a school of thought that intercooling is not of value for non-pressurized airplanes because it doesn’t really make a difference until the airplane is operated at an altitude of 18,000 feet or higher. For older-generation intercoolers, that may be true. With the efficiencies of newer ones, we believe the detonation margin improvement and ability to keep the engine cooler on hot day mean that they are valuable at all altitudes.

American Aviation. By the 1980s, many of the manufacturers of turbocharged airplanes were installing intercoolers as standard equipment. Their efficiency was very good for the technology available. Nevertheless, technology marched on and American Aviation (www.americanaviationinc.com) developed more efficient replacement intercooling—which it calls Ultracooling—for the Cessna 340 414 series, placing the intercooler in the nose bowl of the nacelle. Price for the kit is $15,000 and installation requires 45 hours.

American Aviation also offers a kit to add intercoolers to a Piper Navajo. Price is $18,500 and American’s Jim Christy said installation is 45 hours.

Merlyn Products. The turbocharging system in the Bonanza A and B36TC has been the subject of some criticism. Merlyn Products (www.merlynproducts.com) offers a bolt-on, intercooler that Merlyn’s Hugh Evans described as more efficient. The price is $12,000 and installation takes eight hours, although five hours of that is for required painting.

Evans told us that an even more efficient intercooler should be available from Merlyn by the end of this year.

The systems include the most current version of the line of intercoolers Tornado Alley has developed. Kits are not offered; installation and testing of the full system is carried out at Tornado Alley’s facility in Ada, Oklahoma.

Having flown intercooled and non-intercooled turbocharged airplanes and fought heat issues on the non-intercooled machines, we are bullish on intercoolers, both factory-installed and aftermarket. Nevertheless, use caution when looking at a purchase of an airplane with an aftermarket unit—if any of the STC paperwork is missing, it’s probably best to walk away.