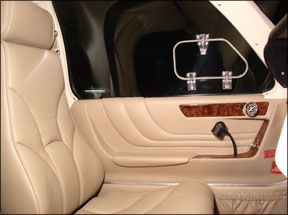 Its the scope of aircraft interior work thats hard for many owners to wrap their mind around. Imagine you want to spruce up your living room. You could spring for a couple slip covers for the tired couch and put down a new throw rug. Or you could strip out everything right down to the studs in the walls and build it up fresh with new wall boards, carpet, built-in bookshelves … you get the idea.

Looking at our recent reader survey, aircraft owners exercise the same range of

upgrade options on their aircraft. With over 200 responses we saw everything from slip covers to cabin-class makeovers that cost more than a small house. Even trying to narrow this down to the standard seats, panels, headliner, and carpet work to compare is difficult. Consider that some shops might remove a pilot-side panel, clean it, paint it, recover the armrest, and reinstall it. Other shops would take that same panel and refinish the surface, dye penetrate the plastic for color and UV protection or cloth-cover it, perhaps add pen and chart holders or remove and cover a long-unused ash tray, rebuild the foam in the armrest and cover that with Italian leather.

The takeaway point here is that you should find out explicitly what services youre getting for your money. More cost isnt always better or appropriate, but you decisions should be informed. That said, some definite themes emerged on vendor, price, and satisfaction with the process and the result.

The bulk of our respondents had some version of a complete interior done. For a four-seat single, the low end was $4200 for a Piper Arrow by a Texas shop. Cheap, but the owner also reported several problems. “Work that was ordered (I have written evidence from the shop) and work not done. For example the rear seats were to be stripped to bone, with all new foam padding. It was not done because

they didnt need it. There was no price adjustment. … Attempts at rectifying the problems have gone on deaf ears.”

The high-roller award goes to a Cardinal owner who put $40,000 into the interior part of a complete restoration using a top-rated shop.

The average was a bit more reasonable at $12, 250, but even that is skewed due to some high-end jobs. The median-the number that approximates the most common response-is $9000. Looking closely at the work people had done, our feeling is budgeting just north of $10,000 for a thorough, but not all-encompassing, refurbishment is a good starting point. This assumes the tear-down process reveals no surprises (more on this in a bit).

The price range for twins is even more wild, but the numbers distill down to an average of $68,335 and a median of $25,000. No matter how you cut it, restoring a twin will cost significant bucks.

Dollars spent is only part of the picture. Refurbishments cost time. We saw an average of six weeks for a complete interior. Simple seats refurbishment or carpeting might take only a few days. Interestingly, the size of the aircraft didnt seem to matter much. Delays in getting components that had to be replaced or dealing with unexpected repairs was the biggest issue.

Additional time to budget for is planning. Expect to spend a couple hours with a good shop finalizing the details of your interior and selecting the materials you want

to use. To make the most of this time (and keep it as short and sweet as possible) get as much as you can out of the way before you show up with your airplane. Photos of aircraft, or automotive, interiors you like are helpful. This is also the time to add that pocket for charts or your spare flashlight youve always wished was close at hand, so have a list of those ready.

This brings up the issue of interior design. A good shop should spend time with you at the early design phase to make sure you dont end up with a subtle version of plaid with polka dots. A couple who had a Commander 114A redone by Mena Aircraft Interiors, in Mena, Ark., told us, “Pam and Tim worked closely with us and provided excellent service and decision making.” In our view, a good shop will display this level of involvement from the first contact.

Take an honest look at your aircraft, too. Crazed windows, worn-off placards, and chipped handles and brackets will stand out against a new interior “like an old pair of sneakers with a new suit,” in the words of one owner. Replacing, repainting or replating will all bump up the price. Several respondents to our survey had comments similar to a Bonanza owner who said, “You need to have a plan before you bring the airplane into the shop. I really did not, and had to make a lot of spur-of-the-moment choices, which, luckily, turned out nice.”

Making decisions along the way turned out to be a factor in the number-two complaint in our survey: Cost overrun. One Bonanza owner told of a, “nearly $6000 cost overrun from repairs made during the process without my consent.” A Cessna 414 reported a final bill “well over 50 percent higher than his estimate.” A Navajo went from an estimate of $26,497 to a total of $55,310.

This escalation doesnt equate a dishonest or poor shop. For example, further digging revealed the $6000 overrun was actually $3500. (The missing $2500 was for a shoulder harnesses the owner had requested.) The remaining amount came from many small items uncovered during the tear-down. All were reasonable repairs, but in total they added up. Similar explanations applied to the other two examples.

But thats not quite the end of the story. The Navajo owner told us, “I felt that it would be a shame to detract from the overall job for lack of doing one more thing …. [but] the price I paid them and the way the bill escalated even though I protested along the way leaves me feeling bitter and embarrassed that I allowed myself to get in that position.”

The lesson here is to get your estimate in writing, including that anything that changes the price must be approved before its done. If a shop baulks at this idea during your initial talks, take your work elsewhere. The initial estimate will probably be higher than a basic quote because youll likely add a special item or two during the design phase.

More importantly, youll want to keep up to 50 percent over the estimate available for the project when you redoing a 30-year-old airplane. Broken stringers, worn cables and other hidden problems will be found when all those panels come out.

You dont have to fix them, but, in our opinion, youd be foolish not to. Our survey supports that most owners think likewise and spend more than they planned.

Late delivery of aircraft was almost tied with over budget as a complaint. Some of these complaints were due to restoration surprises. Others were due to nightmare shop experiences.

“The owner-operator was frequently hungover,” one respondent described. “His helpers were no better. His prices were attractive and he did beautiful work, but often he did not open till noon … I finally took all of the finished, but uninstalled, pieces to my regular shop for installation.”

Screwing up the installation was the number-one complaint. Sometimes the shop handled squawks well. Sometimes they completely ignored them.

There are a lot of shops out there. Our 200-plus responses included 115 different shops, with reported quality varying as wildly as prices. Even within our top picks, only two shops escaped without any complaints.

In our opinion, when shops get crosswise with their customers, communication is often the heart of the matter. Numerous comments came in that the shop wouldnt initiate communication and the owner had to pester them to get information. A Cessna 195 owner commented, “Use a local shop. There are too many detailed decisions to be made to make it effective in attempting to use a remote interior shop.” Were not sure thats necessary with a more common aircraft such as a Mooney or a Seneca. But the shop should be responsive to your calls and e-mails from first contact.

A count in the favor of an established shop vs. a newcomer is that theyve already made mistakes on someone elses airplane. While visiting one shop we watched them measuring seatbelt lengths before sending them for re-webbing. Why? Well,

years ago and owner got into his just-restored airplane and found his belt was six inches too short for his waist. That mistake doesnt happen any more.

If the shop gives you references, be sure to ask how the shop handled squawks that came up immediately or after some time in service. Few jobs are perfect on the first try and how the shop responds to issues is important. If youre having the work done at a shop some distance from your home base, ask if they would approve future warrantee work someplace closer to your home.

That said, realize that perceptions of a shop vary. We had two responses in our survey for a shop, with work done at nearly the same time, where one said, “This was an absolutely fabulous job … The work was impeccable,” and the other said, “They … treated me poorly … They lost my rear arm-rests and have been out-of-stock with their patented custom arm rests since. And their pit bull dog bit me.”

How Far to Go

When an interior is such a big investment, is it worth trekking your airplane across the country to get it into a top shop? You shouldnt have to cross multiple time zones to get to at least one of the top and promising shops in this report.

But well say its worth traveling some distance to get it done right the first time. One Cherokee owner reported: “I had a new interior installed two months before I went to Oxford [Aviation]. I was crushed. The interior I paid for was terrible. When I brought the plane to Oxford, they knew my despair. I was so impressed with their professionalism. Im delighted with their work.” Jim Horowitz, President of Oxford Aviation, says that, “We see the most involved owners are the ones who are coming here after having a bad job done elsewhere.” He added that these were his best – meaning most favorite – customers.

While a beautiful paint scheme looks great on the ramp and top-notch avionics are a pleasure to use, your interior is like your living room; its where your backside spends hours at time and what your passengers think of as your airplane. If the funds and the downtime are available, wed tend to agree with a Cessna Cardinal owner who said, “Do it! No single investment can improve your flying experience more.”