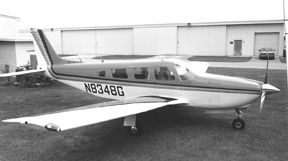 A controversy reminiscent of the old argument, But its a dry heat.., is whether youre better off to bite the bullet and buy a new airplane or nurse an older model along, paying as you go for the inevitable things that break.

Given current prices, a new airplane is actually more of a howitzer shell than a bullet and can blast an abyss into all but the plushest bank accounts. Buyers who opt for new airplanes sometimes rationalize the cost by convincing themselves that a new airplane will break less and will thus actually cost fewer dollars in the long run. Also, it should be more reliable, thus fewer canceled trips.

On the other hand, owners of mature airplanes-and thats most of us-grow accustomed to a schedule of maintenance and replacements of almost metronomic regularity. The big worry, of course, is that the airframe will get so ratty that it will nickel-and-dime you to death. That may happen. But it may be more related to an abused airframe than one thats merely old but otherwise well cared for.

Data, Gimme Data
There is no definitive solution to this debate, given the variety of complex elements that come to bear, including depreciation, finance expenses and the intangibles of what should be peace of mind that a spanking new airframe should confer. Ask anyone who has both bought new and owned used and youll likely hear, I dunno, I never added it up.

But one owner who did add it up-and then some-is George Beaumont of Boca Raton, Florida. In response to last springs query for reader feedback on Piper Saratogas, Beaumont sent us the mother lode of aircraft expense tracking.

Two massive bound books detailing every invoice, every quote, every flyspeck wire connector and replacement washer arrived on our desk with a massive thud.

We sensed an opportunity here. Beaumont bought his Saratoga new from Piper in 1981, at a time when GA hadnt quite tanked entirely. (Piper was still in business, not yet morphed into New Piper following its bankruptcy.) If anyone could opine intelligently on the cost of new versus old, it would be George Beaumont.

We pored over Mr. Beaumonts records, looking to answer that perennial question: Did buying new really mean less down time and fewer bucks tossed at the maintenance hangar? Our analysis proved interesting, if not definitive. We were somewhat constrained by the fact that Beaumonts Saratoga soldiered in Part 125 service for six years and the charter company thus paid for the maintenance. However, the remainder of his records were astonishingly detailed.

Up and Down
Beaumont acquired N8348G in October of 1981 for $110,000. Before you get too wistful about the good old days, adjusting for inflation, that converts to just over $206,000 Sacajaweas and is in line with the price for several current light singles. Whats interesting, however, is that a new 32R-301 typically costs about $400,000 today.

At this juncture, well mention one of the variables we earlier pledged to ignore: lost investment opportunity. If you figure a new airplane costs at least three to four times as much as a decent example of a used equivalent airframe, the investment required is enormous.

And considering what the stock market has done during the past two decades, calculating what Mr. Beaumonts $110,000 would have done if invested elsewhere is a place you dont want to go. But some would-be owners must go there, hence they buy used.

Then there are the cruel value curves that come together and squeeze the owner of a new airplane like an over ripe tomato. While his airplane plunges in value for the first five years, the owner of a pre-owned airplane usually enjoys modest appreciation. So much for reality.

In checking to see whether new owners could reasonably anticipate a major maintenance cost advantage over their chronologically challenged brethren, we separated regular maintenance from major upgrades, replacements and overhauls.

Also omitted from these totals were the 100-hour inspections during the first two years of the survey period, since the airplane was on a Part 135 contract. We also didnt include a major airframe upgrade last year (a LoPresti Howl Cowl) which was purely discretionary rather than being within the realm of maintenance or needed upgrade expense.

All values in the accompanying charts have been converted to 2000 dollars for a fairer comparison. Nevertheless, a certain amount of apples and oranges cant be avoided. For example, older radios might require upgrade and replacement because they would be old hat to Marconi.

Changes in regulatory requirements and available technology can make it all but impossible to distinguish have to from want to for these purposes, however, and new owners arent immune from either impetus.

Going Up? No
A reasonable assumption would be that regular maintenance and annual costs rise more or less steadily over the life of an aging airplane. Based on our admittedly unscientific survey, however, that assumption could be wrong.

Since 1987, 48Gs annual costs have been cyclical rather than cumulative, tending to rise incrementally over a few years to a sizeable annual bill and then dropping off to start all over. Given that the annual frequently includes discretionary but regular items such as prop balancing, corrosion treatments and prophylactic replacements, this makes sense.

New owners will encounter these not too many years down the road, so these variations are not entirely a matter of time-induced problems. Whats instructive is that our adjusted dollar baseline or low point on these cycles stayed relatively static at about $1500. Total maintenance for 48G showed a similar sine wave, with a steady baseline near $3000 annually.

What new owners reasonably could expect to avoid for the first 10 years or more of ownership are the high-dollar major refurbishments such as engine and propeller overhauls, exterior paint, fairings and Plexiglas or buffing up a tired interior.

In the case of 48G, these expenses began eight years after acquisition and totaled more than $70,000 over the ensuing decade. Even a new airplane will need the same attention eventually, so its a matter of postponing rather than avoiding unless youre planning to sell before they pop up. Of course, the asking price would have to be adjusted accordingly.

Generally speaking, however, you never get back the full invested value of any upgrade when you sell the aircraft, including necessary upgrades such as engine overhauls.

Other Airplanes
Obviously, one aircrafts This Is Your Life isnt a sufficient basis an airtight conclusion on the relative economics of new versus used. Clearly, factory fresh is more likely to be a known commodity. Well, maybe. Some new Cessna 172 owners would argue that point. But at least theyre covered by warranty.

But used aircraft can be all over the lot as to actual condition and the resulting cost to get it right. Assuming you cover that critical first base, however, and acquire a solid used airplane with no chronic or characteristics maintenance problems, what itll cost you to fix it and fly it will probably be very similar to a spanking new airframe, once the new airplane runs out of a warranty.

And the overwhelming majority of the GA fleet is long since out of warranty. According to GAMA, the average U.S. general aviation four seater operating today rolled off the line in 1967. Vietnam raged, Kirk, Spock and McCoy were boldly going and hippy was not a description of body contour. As a crosscheck on the results for 48G, we also ran maintenance and upgrade numbers for our pampered 1975 straight-leg C182, also converted to 2000 dollars.

The results were surprisingly similar. As one would expect with the smaller and less mechanically complex Cessna, total and average costs for all expenses ran between 10 to 20 percent less than for the Saratoga.

Nevertheless, annual and total maintenance expense over the last decade for an aircraft six years older rocked up and down in shorter but similar clusters. Unlike 48G, our apparent baseline did appear to rise over the period.

Do the similarities and differences in a somewhat older aircraft mean anything with respect to the initial conclusions? Who knows? The only thing about which we feel certain is that annual and maintenance cost graphs for most owners are much more likely to resemble an EKG than a steady, age induced incline, whether used or new. That means assuming that a used airplane has no expensive hidden damage-say corrosion or a cracked spar-it probably wont be much more maintenance intensive than a new airplane. Theres a chance it could be less maintenance prone.

To keep from being driven screaming in the night, an owner should be prepared to budget for the high peak years and save pennies and nickels in the off years. As Wally Schirra used to say, thatll help everyone pull an even strain.

Also With This Article
Click here to view charts for Cost of Annual, Total Maintenance Costs and Firewall Forward Maintenance.