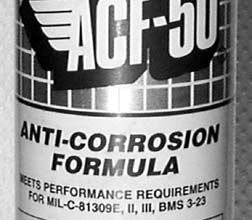 Buried in the fine print of the FARs, youll find provisions that govern practically everything related to maintaining an aircraft, from replacement parts, to fuel, to fasteners, even oil and grease.

Technically, any material used for maintenance or repair on a certified aircraft is supposed to be approved through some kind of formal process, say a type certificate, supplemental type certificate, parts manufacturing authority or even a Form 337 field approval.

But how about paints, waxes and anti-corrosion materials? Evidently, those fall under the FAAs jurisdiction as well, as a sniping contest between two makers of corrosion control materials recently revealed.

Were not sure whos right but in our view, Lears labeling is misleading, at the least. Its cans clearly say meets the requirements for MilSpec 81309E. Yet according to our checks with the U.S. Navy office that oversees MilSpec approvals, ACF-50 was removed from the list in 1997.

In addition, Boeing, which is listed by Lear as having approved ACF-50, actually hasnt. In fact, it asked Lear to stop making this claim some 10 years ago. Is the MilSpec process really all that important? Yes and no. Yes because it represents a framework for standard performance. No because on little airplanes, the FAA often looks the other way in enforcing such approvals. But often is not the same as always.

For MilSpec approval, a manufacturer typically sends its product to a specified MilSpec lab such as Scientific Labs in Coral Gables, Florida, for independent testing to a set of performance guidelines. The results are sent to the U.S. Navy at Patuxent River, Maryland. If the product passes, its placed on the qualified products list (QPL) for MilSpec application.

When we last examined anti-corrosion products in our February, 1997 issue, ACF-50 was on the Navys QPL list, with approval under MilSpec C-81309E. Since then, the MilSpec was revised and ACF-50 either no longer meets it or didnt reapply. Lear declined to provide us with the details.

When we contacted Lears Mark Pearson, he declined to respond directly to our questions about whether ACF-50 had MilSpec approval or not. No documentation confirming the approval was provided, despite the claim being made on the product label that ACF- 50 meets the requirements for MilSpec. Pearson argues that because ACF-50 was once approved, a shop can still apply the material, note as much in the aircraft logbooks and have no concerns about legalities.

FAA Says
We checked with the FAA to find out if this is true. Not too surprisingly, we got less than a clear cut answer. A query to Orlandos FAA field office revealed the claim that any material used for aircraft maintenance is supposed to carry MilSpec approval or specific approval from the aircraft manufacturers service manual, which is ostensibly the reason manufacturers spend the money for the approvals and add the claim to their labels, as Corrosion X has done. Products with the same MilSpec approvals are, theoretically, interchangeable for the applications listed.

We also checked with FAA Headquarters and according to Bill OBrien, National Resource Specialist for Support Products, using ACF-50 may still be legal due to the fact it was approved in the past and it has now become what the regulations refer to as accepted practices and procedures within the industry.

If thats the case, we wondered, do FSDO maintenance inspectors in the field follow that philosophy? Or is some shop likely to get hammered for applying a material not MilSpec approved?

Following OBriens logic, the so-called illegal chrome spinners we reported on in the June issue should be allowed under the accepted industry practices clause. Yet, as we reported, a local FSDO inspector grounded a Baron and ordered its chrome spinners removed and replaced, at considerable cost to the owner.

OBrien concedes the point but told us that its very unlikely that the FAA would pursue enforcement against a shop using ACF-50 because the material lacks MilSpec approval. Nonetheless, he concedes that FAA certified repair stations using non-approved materials such as ACF-50 could have a problem with legalities.

Use It Or Not?
So all of this boils down to this question: Should you use ACF-50 on your aircraft or allow your shop to use it?

First, as weve said before, we think some kind of periodic anti-corrosion treatment for light aircraft is a must. As airplanes age, corrosion is their worst enemy and more frequently than ever, were seeing corrosion damage thats uneconomic to repair. The means to avoid this exists in the form of anti-corrosion materials such as ACF-50 and Corrosion X.

In our last investigation of these materials, we concluded that Corrosion X and ACF-50 lead the GA market because both companies have aggressively marketed systems to make it practical to fog the innards of a small airplane. Our field trials at the time suggested that both are effective and that one performs no better than the other. Corrosion X seems to enjoy the edge in customer support niceties such as fogging equipment and packaging options and has been much more open than Lear in answering technical questions forthrightly. Further, we do have concerns about ACF-50s consistency from batch to batch.

In a perfect world, you could use any material you like on your aircraft. But we dont live in a perfect world and the FAA occasionally intervenes. We think its unlikely that the FAA would spank a shop for using non-MilSpec approved ACF-50. Nonetheless, we know there are inspectors in the field who might decide to do just that. In any case, were troubled by Lear Chemicals fuzzy labeling. For shops or businesses that do care about such things, the labeling implies that ACF-50 is MilSpec approved when it is not.

In our 1997 report, we discovered that Lears spray cans contained 18.1 percent methylene chloride, a hazardous material and known carcinogen. This fact was omitted from the ACF-50 labeling and product data sheet. Lear told us then that this warning was inadvertently overlooked and, in any case, the company later switched to a carbon dioxide propellant.

Bottom line: ACF-50 seem to perform as claimed but we also think Lear ought to be more accurate in its labeling, protecting shops and owners against any beefs with the FAA, however trivial the risk.