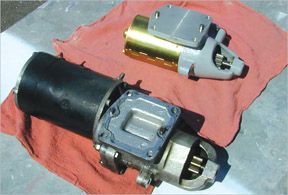 Aircraft performance-cruise speed, climb rate, payload, fuel consumption, range, roll weight, stall speed-is always in the grip of one harsh and unyielding constant: weight. A heavy car may be a good thing if it smoothes road response but a heavy airplane is never good. Designers sweat bullets to reduce empty weight, nipping ounces here and there, always in the quest of better performance. But airplanes, like people, gain weight over the years through the addition of equipment, dirt, hydraulic fluid, orphan wiring, paint touch-up, pilot paraphernalia and paperwork. Owners are shocked to find that so-called in-service weight gain can easily add a dozen or more pounds to empty weight.

With one exception, aftermarket products havent meaningfully addressed in-service weight gain. The single exception is the advent of lightweight starters which of themselves knock as much as eight pounds off the empty weight, an enormous savings that airframers and engine makers rarely find without nibbling bits and pieces throughout the entire airplane. B&C was the first company to manufacture lightweight starters for aircraft. Billy Bainbridge started the company in 1980 and his clientele were the cream of the aerobatic crop-pilots who needed the most performance they could get to find a competitive edge.

Removing eight pounds from the front of the engine gave them a lighter gross weight and a wider CG on airplanes that were overly built-read heavy-in the first place to withstand unlimited maneuvers. Since serious competition aircraft were licensed Experimental, it wasnt long before the day-to-day homebuilder began looking to save some pounds and B&C started to grow.

Today, the lightweight starter market has become highly competitive and theres a product for nearly every engine . This field has matured in recent years and because owners have so many choices, weve examined the market. Heres our overview.

Product History
Smaller companies were modifying automobile starters for use on homebuilts, but nothing matched the quality, fit and look of the B&C product. Of course, to achieve this, it took money-B&C starters werent and still arent cheap. They were priced moderately more than the Delco and Prestolite starters offered by Lycoming and Continental, but the weight savings sealed the deal. Unfortunately, they werent certified and as the companys reputation grew, spam can owners wanted to knock weight off of the front of the airplane and began installing them via Form 337 field approvals, if they could get it by the local FSDO. B&Cs success prompted Tom Williams to approach the business with his own product, which eventually evolved into the Sky-Tec starter. Using a basic automotive starter motor with an adapter cast to fit on a Lycoming engine, Williams entered the market at a price $200 lower than B&C. The starter didnt look quite as pretty-it was sand cast rather than investment cast and the paint was rough-but it worked. It fit on the engines with the same hardware, perhaps slightly modified and it didnt have the heavy automotive “butt” that homebuilders had to deal with. The price was hard to resist and when compared to the other modified starters available to the Glasair, Lancair and RV crowds, this starter soon gained a significant market share. Today, there are four aviation starter manufacturers and virtually all of them are making lightweight starters. In fact, the term lightweight will soon work itself out of the vernacular. The old Delco and Prestolite starters that weighed so much are still being supported, but Delco Remy is out of the aviation business.

The Prestolite line was acquired by Electrosystems, which was acquired by Kelly Aerospace and now ceases to exist as a brand name. These starters were reborn as Magnaflite to establish a new product identity to go along with their new lightweight motor. Since all starters now employ new technology and all starters are lightweight compared to the old units, the terms “lightweight starter” has now become simply “starter.”

The starter “majors” are B&C Specialties, Inc., Sky-Tec, Inc., Lamar Technologies, Inc. and Kelly Aerospace, Inc. Of the four, B&C and Sky-Tec went into business for the sole purpose of building lightweight starters. Lamar Technologies has been building electrical components for aircraft since 1982 and has components for more than 40 types of aircraft. Kelly got into starters by acquiring Electrosystems and evolved its market from what remained of the Prestolite line. The company manufactures a number of aircraft electrical, fuel and turbo components.

All of the old starters are supported, at least for now, by a number of repair stations or with parts from the manufacturers. And when you send a starter in for servicing, remember that you can have a perfectly good repaired starter without going through the expense of a yellow tag rebuild. With the new technology, lighter weight and new warranties, making the switch to a new starter is a no-brainer. In addition to weight savings, lighter starters also perform better.

Starter TBO
How long should a starter last? Like all things related to airplanes, it depends on use and the guy sitting in the left seat. A starter draws a lot of power from the battery. If the starter has an electromagnet rather than permanent magnets found in modern starters, the magnets themselves absorb power, robbing it from the available cranking power.

This is why most of the new starters use permanent magnets. The exception is Sky-Tecs Hi-torque starters, which use electromagnets because theyre usually installed on engines that put too much demand on a fixed magnet. More cranking power is needed for helicopters, for example, as they have no flyweight to stabilize the rotation.

B&Cs Bainbridge reports that he has fielded hundreds of starters that have gone to 2000 hours. B&C starters have the shortest warranty of all, just 100 hours, and are the most expensive, but their failure rate is low, according to the company and what field reports we have heard. The other three manufacturers offer 24-month warranty periods, with Lamar limiting the hours to 1000. Sky-Tec in particular touts their same day shipping overhaul/exchange policy in support of warranty service.

Because of the demands put on starters, warranties are important. Companies can be generous because the units are relatively simple to repair and if a unit passes all of the tests before it goes out the door, it should last a long while. The problem is not so much with the starter, but the guy in the cockpit. Pilots can damage a starter by improper starting. This can be due to poor maintenance, such as mag timing or bad cables, or simply a weak battery.

The two most common starter failure scenarios are kickback and overheating. Prolonged periods of cranking-called cycles-could cause the battery and the starter to overheat, melting internal parts and causing the brushes to become brittle and begin to disintegrate.

Bad mag timing or mixture management can cause a kickback, which is often signals the end of the starter, shearing a pin within the unit. Jim Errington, of Lamar, told us that the company could make a starter that wouldnt shear the pin, but engine manufacturers and owners wouldnt like it. If there isnt a design-in failure point, then the damage would occur somewhere inside the engine itself. Better to have a starter fail than tear up the engines internal gearing.

Owners of lightweight starters are impressed by the spin rates of the permanent-magnet units. It sometimes seems that you can taxi just by hitting the starter switch. It takes a lot of oomph to overcome compression, cold oil and interference drag and the new starters are all capable of spinning an engine at an impressive rate. But not for long cranking periods.

In reality, starters are ruined if you allow the engine to crank for over six to 10 seconds. Besides the power drain-cranking initially requires up to 300 amps and achieves 90 percent of that in .33 milliseconds-the heat buildup is incredible. The starter should be allowed to cool for one minute between each 10-second starting attempt. After three cycles, wait for 15 minutes, both for cooling and to allow the battery to recover.

Engines are designed to start at specific RPMs, according to Rick Quave, a Kelly Aerospace engineer. If youve ever hand propped a Cub, you know that you dont need high RPM to fire a mag. If a starter spins too quickly and the mag doesnt fire right away, the counterweights will take the impulse coupling off line and the engine probably wont start at all. Inflight starting is also factored in, with an aerodynamic and mechanical limit to available RPM. Kelly limits starter spin to 150 to 180 RPM, depending on application and Lamar to around 100 RPM.

Choosing a Starter
When a starter shells out, an owner must choose between new and overhauled and then between older, heavier (but cheaper starters) or one of the newer designs. Factors in the decision are weighted by price and warranty and, as always, customer experiences with the manufacturer.

Todays choices are all lighter than OEM starters and within a couple of pounds of each other for a comparable product. All of the manufacturers will help you select the correct starter from their lineup for your application. While the warranty suggests durability and dependability, dont overlook street talk. Shops and operators have a feel for what starters work best in different situations.

B&C and Sky-Tec offer counter rotating starters for those Pipers that use them and Sky-Tec is the only manufacturer who makes a replacement starter for Franklin engines, weighing in at over 18 pounds less than the OEM version. Presently, Kelly Aerospace does not make starters for Continental engines.

Which to buy? Weve heard no significant negative feedback from buyers of any of these products. On paper, Sky-Tec strikes as the most compelling first considering because it has a broad line of starters for engines of all types, competitive pricing and a generous warranty. B&C products appear to be the best made of the lot, but we cant say that will or wont affect durability. In our view, Sky-Tec simply has a better warranty than B&C.

Lamar and Kelly are strong contenders only if you want to stick with the traditional Bendix drive, saving the hassle of minor modifications on baffling or brackets. We lean toward the solenoid as the better starter activation mechanism than the Bendix drive. Its well proven in the automotive field, in our estimation.

-Jim Cavanagh is a freelance writer. He lives in Kingsville, Missouri.