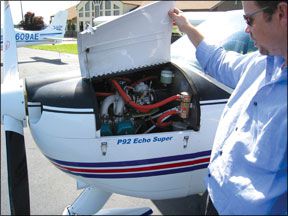 Back when this whole LSA thing was being conceived, part of the appeal was simplicity: Two seats, fixed-pitch prop, a couple instruments … what could go wrong?

Actually, a lot can go wrong, break or just plumb wear out. So-called legacy LSAs can have over half a century on their airframes. Corrosion and fatigue mean just about anything can snap. For a Piper J-3, thats no problem. You could literally build a J-3 from scratch with available replacement parts. For an Aeronca C-3, your options are limited.

Flying a new light sport (S-LSA) doesnt guarantee parts and support will be simple. Your experience will almost entirely depend on how the company built the aircraft, how well they prepared for maintenance and how long they stay in business.

Old or new, the first step in protecting yourself is understanding why LSA maintenance is different and knowing what questions to ask before you buy.

Cant Get That anymore

Supportability for legacy LSAs is primarily a numbers game. If enough airframes of a particular are model flying, then its probably worth someones trouble to supply parts. Thats what makes models like the Piper J-3 (Cub) and PA-11 (Cub Special), or the Aeronca 7AC (Champ) and 11AC (Chief) good picks.

Even when there are sufficient numbers, however, out-of-business companies can mean other roadblocks. Taylorcraft owners are dealing with this now in that the current owners of the type certificate wont release the engineering data for the aircraft (theyd like someone to buy the type certificate instead). This makes fabricating replacement parts challenging because of an FAA policy called “identicality.” In order to supply a replacement part for a certified aircraft, the manufacturer must prove that the part is identical to the original. If identicality can be shown, then the part can be used as if it were the original part.

“Identical is a pretty tough word,” said Bill Reed, president of Wag-Aero Group, “especially if you dont have the original design data.” Reed told us they rarely try to fabricate parts outside of this identicality rule as that would require a supplemental type certificate (STC), which is an even tougher process. STCs only make economic sense with large sales volumes, such as the popular STC for putting fuel tanks in the wings of Aeroncas that originally only had a fuselage tank.

Whether its a legal part under identicality or STC, legacy LSAs are certified aircraft and any parts must be approved in some way. Thats not to say you cant use screws from Lowes to hold down a piece of trim. It just means any repairs should be logged as required and significant parts must have the right paper trail (and commensurate price tag) to be airworthy.

The takeaway message for you as a prospective buyer is that close examination of both the airframe and the available parts chain is in order. Your best friends will be the experts in a type club for that aircraft of interest because you need specifics for that particular airframe. For example, if youre looking at a Cub with a Continental engine installed, you want the Airworthiness Certificate to say something like “J3C-65.” The C is for Continental. If it says “J3L-65” (Lycoming) or “J3F-65” (Franklin), then there had better be an appropriate FAA Form 337 in the logbooks for the engine switch. Looking at a T-craft that needs its old lift struts replaced? Itll set you back $3000, but theyre available from three sources. Need cowling metal for that same aircraft? Plan to supply it yourself (Thats right, yourself. See sidebar, page 17).

The plus with these aircraft is that supportability is a known entity.

Buying a new S-LSA is more of a crap shoot in that we know some of the companies selling today wont be around 10, or even five, years from now. There are actually two issues with company support: maintenance (which include parts availability) and modifications.

With the S-LSAs, regulations are looser on parts. Jabiru engines use NGK motorcycle spark plugs and the oil filter from a Toyota Camry. Many LSAs use automotive light bulbs you can pick up at NAPA. Where LSAs use more specialized parts, we like to see LSAs that use aircraft parts common in the U.S. and available from places like Aircraft Spruce. If the company is a U.S. company, that helps. These companies often are kit manufacturers as well, so many of their parts come from local outlets.

Many European designs use parts not commonly found in the U.S. This has been a problem, especially with wear items such as tires and brakes. Wed avoid designs where any regularly-replaced items come exclusively from the company or from one foreign supplier. Some U.S. distributors of European LSAs have switched the parts they use or allowed substitution (see sidebar page 16) to deal with this problem. Many S-LSA parts are not built with the same robustness as certified aircraft. We have reports of seats and interior parts, seatbelts, strobe packs, landing gear legs, latches and electrical switches being weak points on many designs. Check these for wear before buying and find out where replacements can be gotten.

Of course, parts such as wheel pants or wings must come strictly from the company. Going with a larger company is a safer bet here. Naming names, we know that Flight Design, Gobosh, Remos and Tecnam are all strong in keeping a supply of company-specific parts in the U.S. Others may be as well. Jabiru USA assembles and paints the Jabirus in the U.S., so parts can be gotten out of their production stores.

Youll want to talk with owners too, because what seems simple might not be. Tim Adelman operates both Tecnams and Sky Arrows in a flight school. When one of the Tecnams had damage to its aluminum wing, the repair was made using readily-available metal-including building a new rib. When the composite wing on the Sky Arrow needed a fix, the fiberglass work was trivial but the cloth needed for the repair wasnt available in the U.S. and the company wasnt much help. A Sport Cruiser owner we spoke to needed a new gear leg, which the factory in Czechoslovakia sent. The “part” was an unfinished piece of fiberglass. It didnt even have holes drilled in it to attach to the airframe and wheel.

Adelman puts a good maintenance manual near the top of the list as a requirement for a good S-LSA. Any repairs that arent specifically addressed in the manual must be approved by the manufacturer. That could be a serious hassle in both effort and aircraft downtime.

S-LSA owners have a maintenance trump card, however, that legacy LSA owners cant match. Any S-LSA can be converted to an E-LSA by requesting the change from the local FSDO. This makes the LSA an experimental aircraft, and now the owner can decide what repairs are legal and airworthy. While many owners wouldnt want to take on that responsibility themselves, it could free an LSA repairman or A & P mechanic to fix or replace the part your having trouble getting fixed. The catch is that once its an E-LSA it cant ever switch back. E-LSAs currently cant be used for rental or other commercial operations (towing for hire is OK).

An interesting twist on this is that if an S-LSA manufacturer goes out of business and no group steps up to take responsibility for continuing support, such as issuing service bulletins, then all the S-LSAs of that make become E-LSAs automatically. This could be a serious trap for flight schools who have invested in one make of LSA for flight training. There is an exemption process for homebuilt experimentals to be used for rental and flight training (a 319H letter), but this has not been extended to cover E-LSAs yet.

The takeaway from this picture is that there are avenues to keep old and new LSAs flying. None are paperweights strictly because the manufacturer is gone and buried. It just may take more effort as an owner to get the parts you want installed and legally airworthy than you expected. Hedge your bet by making sure a solid support system is in place before you buy.

Its no guarantee, but itll help.