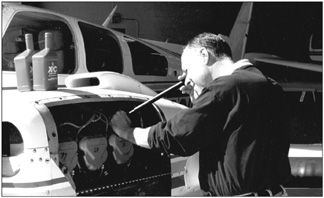 Whats one of your worst nightmares? For many aircraft owners, its a mechanical failure away from home and outside of normal business hours-maybe over a weekend with your spouse and kids in tow. Youre stuck in a remote location without a familiar mechanic and without parts.

Enter Fast Fix, the 24/7 flight support company started recently by former Firewall Forward owner Mark E. Seader, to help get you out of your pickle.Fast Fix isnt cheap and its service promises may lack teeth, but according to erstwhile owners in distress, Seader delivers. So herewith is a report on what this company proposes to deliver. You can decide for yourself if its worth the price.

Airplane AAA
Seader says he got the idea for Fast Fix while musing over why there was no analog of the American Automobile Association for airplane owners. The notion of being able to make a telephone call from any-where and obtain 24/7 road service had no equivalent for general aviation. Seader-whose fans bill him as nothing less than a brilliant remote-control diagnostician-had become accustomed to receiving calls from distraught pilots who were on the road and grounded.

His practice of listening to a pilots telephonic description of the problem, figuring out what was wrong, finding (and screening) a local mechanic and arranging for drop-shipment of needed parts, became the basis of Fast Fixs business model. Fast Fixs Web site indicates that they maintain a roster of 233,000 FAA certified airframe and powerplant mechanics, which Seader readily acknowledges is nothing more than the FAA database obtained through a Freedom of Information Act request.

Fast Fixs initial direct-mail brochure arrived over the Thanksgiving holidays and it immediately started our lawyerly who-needs-this-latest-scam nose twitching. According to the mailing, for $1200 a year for our Cessna 340-the annual membership fee per aircraft varies from $600 to $1475, depending on the aircrafts number of engines and hours flown-Fast Fix would guarantee to do very little, according to our initial reading of the contract.

Specifically, the material duties of Fast Fix under the agreement are: (a) to make a telephone diagnosis of the defect based on the pilots description; (b) to secure a local FAA-qualified mechanic; (c) to procure and transport necessary parts; and (d) to assist in resolving any dispute with the mechanic. The contract makes clear that the membership fee does not cover any of the costs of repairs, either for parts or labor and it exculpates Fast Fix from every kind of liability, apparently even including damages arising from Fast Fixs own failure to render any services at all. And the clause providing for resolving disputes by unadministered arbitration-only in Colorado-assures that any disgruntled member would have a difficult time enforcing his limited rights under the contract in any event.

So why would anyone want to sign up? We were surprised that de-spite our initial reaction to the lack of any guaranteed services and to what many would see as substantial expense and the oppressive con-tract form, customers uniformly heaped lavish praise upon Fast Fixs founder.

Digging into the Contract
Fast Fixs unique selling proposition is the purported 24/7 availability of its founder, Mark Seader. (When we first tried to reach Seader at the phone number listed in his direct-mail piece, he didnt respond to the first three phone messages or to a follow-up email. We finally tracked him down at home one evening. But, in fairness to him, the calls were not made to the 24/7 Fast Fix members line and his business was not yet really off the ground.

According to Seader, he began solving off-hours mechanical problems while he was the owner of Firewall Forward from 1984 to 2002. He began using Aircraft Parts International, which is located down the block from FedExs operations in Memphis, to drop-ship parts until 11 p.m. and provide next-day delivery. He says he has had good results finding mechanics who are willing to go out on a Saturday or Sunday to replace a starter, wastegate or tire, although as of this writing, he doesnt have any material number of mechanics signed up or pre-screened.

Seader believes that GA aircraft are flown disproportionately on weekends and are, accordingly, subject to a disproportionate number of weekend mechanical breakdowns. He figures that for every 1000 aircraft owners on the busiest three-day weekend, only about 35 percent will be flying. Of those, somewhere between 1 percent and 3 percent will be unexpectedly grounded.Thats his market, he says. His service is sold, Seader explains, based on fear factor, an owners fear of being stranded and not knowing what to do.

Fast Fixs service is intended to provide assistance 24/7 away from home and on weekends and after normal working hours. Seader aims, he says, to have a problem diagnosed within 45 minutes of the first phone call and within one hour, to have a mechanic located, a labor rate negotiated and parts shipped by FedEx or counter-to-counter air freight.

Seader Delivers
Seader provided names of previous customers for Fast Fix-like services. Richard Sackett, a New Orleans-based advertising executive and Cessna 421 owner, definitely plans to sign up for Fast Fix, based on Seaders prior track record. Sackett relates that he was flying into Meigs in his former Cessna 414 on a Friday evening when he experienced an alternator failure.Sackett, who knew Seader from prior engine work done on his airplane by Firewall Forward, called Seader at 6 p.m. on Friday from Meigs.

Seader found a mechanic, had the required replacement parts drop-shipped to Chicago and had Sackett back in the air by 11:30 a.m. the next morning.The mechanic charged only his regular hourly rate and Seader didnt charge anything. Appropriately, Sackett is a loyal fan. He says that most of his flights are over weekends and often to geographically remote places in New England.

According to Sackett, Fast Fix will be worth it to him because Seader has a network of known quantities at his disposal and that having Fast Fix will be like having his own flight department for less than what I pay Jepp for reams of paper.

A similarly satisfied customer is Lloyd Copenbarger, an attorney who owns two Beech Dukes. Copenbarger, who lives in the Newport Beach, California area, has called on Seader several times since 1986 to diagnose and repair his aircraft. On one occasion, grounded in Stockton with a dead starter, Seader found a replacement and had it delivered the same day. The local mechanic had told him it would take at least four days to find a replacement.Copenbarger says he will sign up for Fast Fix because he values having Seader available for a second opinion or for a similar off-hours mechanical problem.Copenbarger points out that Fast Fix is dependent on Seaders personal services, that calls will be concentrated on weekends, particularly holiday weekends and that Seaders services may not be scalable if demand is overwhelming.

Sign Up or Not?
As Richard Sackett points out, Fast Fix makes sense for a high-end user who is willing to pay for peace of mind and is willing to risk paying for a service that, in all likelihood, he will never need. This means Fast Fix is much like insurance and probably land-based AAA, for that matter.

For those who have used Seaders services, the results seem favorable and he does seem to have uncanny diagnostic abilities. However, we would like to see a fairer form of contract and a more professional response to initial inquiries.

But theres no question that its worth something to have Mark Seader on your side. The one time you need him, stuck far from home on a weekend night, may be worth the yearly cost. Whether you will want to pay a substantial insurance premium merely for the availability is another matter. Its clearly not the scam we suspected at first, but whether its a good value for most owners is questionable, in our view.

What we would like to see is a one-time, fee-based version of this service based on usage rather than continuous coverage. Even if a one-time use costs $500, it might be worth it for a busy owner trying to juggle business and family commitments along with maintaining a complex airplane.

-Hilary B. Miller is an ATP-rated Cessna 340 owner based at White Plains, New York. Hes a member of the National Transportation Safety Board Bar Association and the Aircraft Owners and Pilots Association legal services panel.