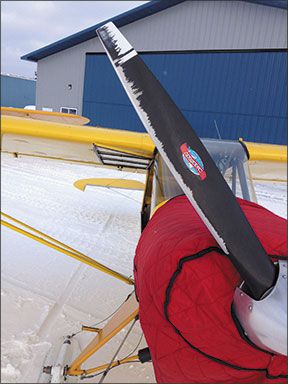 Again, it’s a good news/bad news situation. The good news is that propellers don’t often break in flight—the risk is about the same as being involved in a midair collision—although, when they do, it’s usually catastrophic and means a crash of some magnitude, and aircraft owners spend lots of money on traffic alerting systems. . . The bad news is that the complacency brought on by the reliability of metal propellers often means that owners eventually spend more money on them than if they’d done a little preventive maintenance.

Because the idea is to keep your airplane flying along safely without breaking the bank, we’ll go into what you can do to keep your prop in good shape while taking advantage of the qualities of design and manufacture that allow it to withstand tons of force while whirling around at near-sonic speeds.

Preflight
Preflight the prop with your fingertips. Use your tactile sense to detect nicks and gouges. When you detect a nick, have your mechanic look at it right away. This is one time when delay almost invariably means more expense. Nicks don’t heal—they get bigger, attract corrosion and become stress risers that give birth to cracks. The vast majority can be filed or “dressed” out by your mechanic. It’s a fast, easy and inexpensive procedure.
Using your thumb and first two fingers try to move (with the mags off) the prop blades four ways: fore and aft, toward and away from the hub, lifting and pushing down with the blades horizontal and rotating it in the hub (constant speed only). If there is any feeling of looseness, get your mechanic involved.

On a constant-speed prop, if you see grease, oil or red dye leaking onto the prop blades from the hub, don’t delay addressing the issue. It means a seal in the hub is leaking. As Bryan Mathews, president of H & S Propeller Shop, put it, “If something can get out of the hub, moisture can get in.” That means corrosion. Sending the prop in early may mean you can go with an IRAN (Inspect and Replace As Necessary) or procedure rather than a full overhaul—before corroded parts have to be replaced.

Corrosion Prevention
The number one enemy of propeller longevity is corrosion. One of the simplest ways to fight it is to spray the blades with a light oil and use a clean cloth to spread it around. Derek DeRuiter, owner of Northwoods Aviation in Cadillac, Michigan, operates seaplanes—one of the very worst environments for propellers—told us that he uses LPS 2 oil on his props every 50 hours of operation. He recommended an application every month or two for airplanes that don’t fly frequently, especially in moist climates—even if the airplane is hangared, a recommendation emphatically seconded by Bryan Mathews.

Towbar
Treat your towbar as a lethal weapon. When you put the towbar on the nosewheel, don’t let go of it until you remove it. Make it an absolute rule. Mathews told us, and incident reports we read confirmed, that one of the most common causes of expensive prop damage is leaving the tow bar on and having it hit by the prop.

Taxiing
Don’t multi-task when taxiing. Along with towbar strikes, wandering off of taxiways and hitting something with the prop is high on the stupid-pilot-prop-wrecking-trick hit parade. Keep the yoke/stick fully aft when taxiing (unless there’s a strong tailwind) and during runup. Even on pavement there is often loose sand or gravel—an extra inch or two of prop clearance helps reduce erosion, which over time costs you money. It doesn’t cost a cent to keep the yoke full aft.

Keep the RPM as low as possible when operating in the presence of gravel or puddles. Every piece of grit your prop hits is eroding your wallet.

Ground handling
Don’t use the prop to move the airplane. Yes, the prop moves the airplane when it’s running, but the load is spread out over the blade. The prop manufacturers are unanimous on this one—even if you hold the prop close to the hub when you shove on it, you’re doing damage.

Don’t ignore surface corrosion—it shows up first as little pits on the leading edge. If it’s on the blades, it’s in the hub. Mathews expressed utter amazement at the number of props his shop gets with severe corrosion within the hub as well as obvious corrosion on the blades. He told us that most of the time, had the owner sent the prop in when he found pitting, the corrosion could have been stopped and corrected before it was necessary to replace expensive parts.

Grease
The hubs on Hartzell constant speed props can be greased—something that can be down by an owner with a private pilot certificate or better. The recommendations we received were every 100 hours of operation and at the annual. We were cautioned that the idea of forcing a lot of grease into the hub with the idea that it will drive the old grease out isn’t accurate—it’s more likely to damage one of the seals, allowing moisture in. Go easy on it.

Size Matters
Props get smaller with age and use. There are prescribed minimum prop widths and lengths in the airplane’s Type Certificate Data Sheet—they are not recommendations. The numbers are generated from a complex combination of factors that include vibration, strength, blade twist and flex during operation and ability to convert engine torque and RPM into thrust.

In service, blades get filed because of nicks and may be shortened for a number of reasons, including tip damage. At some point the blade no longer meets minimum size requirements. You usually find out about it during the annual when you get a phone call from your mechanic with the word that you either need a new prop (fixed pitch) or a blade replacement.

There’s no negotiating that matter—there’s no gray area, a blade is either undersize or it’s not.

In our research for this article, we found that most owners are aware that their prop is approaching minimum size because their mechanics keep them advised at each annual. The ones who are surprised by the news tend to be owners who didn’t realize there was a gouge in the prop and the repair was going to take the blade undersize. Or new owners who either didn’t have a prebuy performed, or didn’t have the prop measured on the prebuy, and only discovered it on the first annual inspection.

How do you prolong the time before the prop is undersize? File nicks out early, but do it gently. A big pile of aluminum shavings under the repair isn’t the goal.

Oops
Things go wrong—it’s the nature of human endeavors. When something happens to a prop the questions tend to be “What’s this going to cost?” and, “Can it be operated safely?” What we used to call prop strikes are now referred to as a foreign object strikes—and they can happen whether the prop is moving or stationary.

Time and experience have caused the manufacturers to come up with instructions for how to handle almost every conceivable type of prop impact event—face it, over the last 80 years they’ve seen it all. The criteria published by the manufacturer will tell you what’s going to be necessary: inspect, repair, overhaul or replace.
Most of the time when a prop is damaged, there is no second guessing—it’s pulled and sent to the shop. Our research turned up something disturbing—minor prop damage events turning into expensive problems or serious accidents.

The common denominator was that a blade got bent, but not a lot. The kind of bend is an easy fix for a prop shop—but the owner decided to bend it back in the field, either on his own or with his mechanic’s help. However, without the equipment available at a prop shop, the home-grown repair usually means inducing a second bend into the prop.

The result: after some time in service either the blade (or prop) had to be replaced—much more expensive than the original fix would have been—or the blade separated in flight, leading to a crash.

We prefer overhauling engines and propellers on condition, not at a time in service or calendar time—we think it’s the safe and prudent way to go. With a propeller, attention by the owner in the form of regularly oiling the surface, using caution when taxiing, having nicks and gouges attended to immediately and sending the prop out for a reseal or IRAN at the published TBO can keep maintenance costs down.

IRAN or resealing a prop can delay the need for expensive replacement of blades and hub components most often caused by corrosion and can help assure that when you do have the prop overhauled, you’ll minimize the cost.