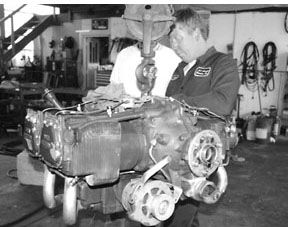 The week before our Mooney performed its swamp buggy pupation, a reader or two asked us for more detail on our recent research revealing apparent high incidences of engine failures in all models of Mooneys.

We reported these findings in our ongoing series on aircraft safety records in the March and June 2002 issues of Aviation Consumer. Our research revealed that the apparent leading cause of accidents in Mooneys is engine failure.

Our research covered all models of Mooneys which, unfortunately, blurs the fact that various models have different powerplants.

The majority of the early models were equipped with some version of the Lycoming O-360 series but later models-the 231/K and the Ovation/R have six-cylinder Continental engines.

Reader Ron Rosenfeld reminded us that our comparison lacked both statistical validity and sufficient detail for owners to attempt to do much about preventing failures. We cant do much about the sketchy nature of NTSB reports but we can add some additional detail.

We found 483 accidents during this period and of that total, 116 or 24 percent were caused by some form of engine failure. We defined engine failure as a mechanical fault of some kind other than fuel exhaustion or mismanagement. However, fuel contamination is counted in the engine failure totals.

For context, among light piston aircraft in general, engine failure accounts for between 10 and 15 percent of all accidents. The Mooneys 24 percent is noticeably higher than other models, if not the highest in its class.

In our March report, we noted that 27 percent of Mooney accidents were attributable to engine failures but that survey encompassed only five years of data. Expanding the data collection to 15 years decreased this percentage slightly, but engine failures as an accident cause are still higher than we would expect.

Whats the Problem?
Sifting through nearly 500 accident reports, we expected to find some patterns if not some answers. Unfortunately, although we unearthed some smoking heaps, we found no smoking guns.

Significantly, when engine failures are broken into obvious categories-we established 23 of these-one of the leading causes is distressingly similar to our own experience, which is to say: cause unknown. In 15 percent of all the engine-failure accidents in IO-360-powered Mooneys, the NTSB report concludes with the distinctly unsatisfying statement that the cause of the engine stoppage couldnt be determined or that no mechanical defects were noted.

A handful of these occurred immediately after takeoff, the rest during cruise or approach. Yet the follow-up is similar. The airplanes are recovered, the fuel checked and they start up and run just fine. Or, if the engine is too damaged to start, no obvious faults are found when checking valve, cam and crank continuity.

If the airframes are significantly damaged, the engine may find its way to an overhaul shop where any subtle anomalies are obliterated in the overhaul cycle. We found not a single instance of anyone following up with the shop to determine the cause of an unknown stoppage. Such that it can be determined, fuel contamination is the leading cause, accounting for about 17 percent of engine failures. These tend to be obvious: water in the tanks, lines or gascolator, foreign matter in finger screens or some other substance that wont burn getting into the fuel system.

In this category, Mooneys fare worse than another airplane we examined, the Piper Arrow. More on that later. We also found something unique to Mooneys. Because they have wet wings, not integral tanks, the tank sealer occasionally degrades enough to form particulate matter that can clog fuel screens. There are several instances of stoppage due to this cause.

Catastrophic failures in Mooneys are neither common nor rare. About 9 percent appear to be due to connecting rod failures while crankshaft failures are all but unheard of. If the detail in the accident report is accurate, rod failures arent often spontaneous bearing or materials failures but are precipitated by lubrication faults.

One reason for this in Lycomings is the disintegration of a piston-pin cap which generates enough metal to clog the tiny oil galleries which deliver oil to the rod bearing. The bearing heats, spins and fails, tanking the entire engine.

On injected Lycomings, one suspicious engine component is the Bendix RSA fuel injection servo. Although engine builders tell us this unit is simple, reliable and unlikely to cause a complete engine stoppage, it was implicated in at least nine of the accidents (13 percent of the IO-360s) we reviewed.

However, mentioned may be the better word. In some cases, the servo was disassembled and found to contain minor contamination of some kind. That said, whether the servo caused the engine stoppage is hardly conclusive.

Most J-model Mooneys are equipped with the much-maligned Bendix D-mag, which has a single shaft driving a pair of mags in the same housing through a gear arrangement. Although this design seems antithetical to logical mechanical reliability, we found only a single failure attributed to the D-mag. Magnetos as a failure point cropped up in seven accidents, but we saw no patterns worth noting and a few of these appeared to be due to degraded ignition leads.

One interesting finding: Every model of Mooney we examined had at least one prop failure resulting in the loss of a blade. These were usually due to a crack propagated at the point of a repair or a dressed nick.

Arrow Comparison
Weve speculated that the Mooney engine installation-cooling, prop, mount and hardware-may have something to do with its apparent high incidence of failure. As a control, we examined the Piper Arrow, which uses virtually identical versions of the Lycoming O-360 series engine. Overall, among the 200 HP Arrows using the IO-360, 20 percent of accidents are due to engine failures; not quite as high as the Mooney numbers but higher than average.

The failure patterns are quite different. In the 200 HP Arrow, catastrophic failures due to rod departures are the leading cause, accounting for 16 percent of all the failures. Two other problems that appear unique to the Arrow are vibration-induced failure of the prop governor oil line and inadvertent dumping of the crankcase oil.

One type of oil quick drain turned out to be too long and when the nosegear was retracted, the tire could contact the drain, dumping all the engine oil. An AD addressed this yet we found five instances of engine stoppages due to oil dumping. In Arrows, fuel contamination as an engine failure cause is a distant sixth-place.

Conclusion
The list of aircraft engines that can fairly be called bulletproof is a short one. Lycomings O-320 series is certainly on it, as are some of the O-540 engines and Continentals venerable O-470.

Heretofore, we thought the Lycoming four-banger used in the Mooney was among the most reliable 200 HP engine available, but now were not so sure. The fact that a quarter of all accidents in Mooneys are caused by engine failures is worrisome.

We find the number of unexplained failures in this engine to be troubling on two counts: One, because they occur in the first place and two because no one seems to care that they do occur, save for the distressed owners.

As noted in the checklist box on page 16, owners can be more proactive in preventing many if not most of these failures with more diligent maintenance and inspection and a sixth sense for trouble spots, which we hope this article will help develop.

But even at that, we suspect that some out-of-the-blue engine chokes are inevitable.