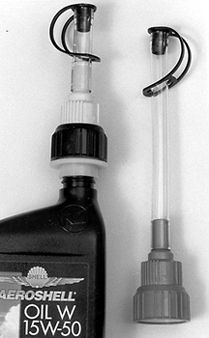 Just as the dropped slice of bread inevitably lands buttered-side down, when you put a quart of oil into your engine, youll probably get a few drops-maybe much more than a few drops-where you dont want them and the rest inside the crankcase, where it belongs.

Weve seen pilots and mechanics use all sorts of funnels, plastic gadgets and harsh invective while doing the dirty deed, so we asked around to see if there are any failsafe secrets on adding a quart or two of oil.

Mechanics tend to use tricks useful only in the shop-mainly large plastic funnels complete with a drain bucket or pan-so we asked pilots what they expected from a good spout, listened to their recommendations and tried all the products we could find.

What It Should Do
First, some desirable criteria: The spout should have some means of controlling the flow so it runs the oil when youre ready, but not before. If not, you should be able to upend the oil container and insert the spout before the oil begins to flow.

Second, the spout needs to be long enough to reach the filler neck, which some arent, or if they are, theyre too bulky to carry easily in the airplane. (Thats the problem with hardware store funnels.)And that leads to the last requirement: Ease of storage. If the spout is a pain to carry and creates an oily storage mess, its no bargain. We grabbed some catalogs and started shopping around.

Next, a quick visit to an auto supply store revealed three more variations to add to our study group. Finally, we dropped a few bucks at K-Marts auto department for several more spouts. Interestingly, all but two of the spouts were made by the same company, FloTool Plastics Corp. Evidently, competition in this product field is less than cutthroat. Your local auto supply store probably has the same selection we found.

Whats Available
The OilValve, (catalog number 1851A) from Sportys Pilot Shop for $2.95 plus shipping seems like one of those great ideas that someone should have thought of years ago. Yet it didnt meet our criteria. The on/off valve has no positive position but instead rotates through 360 degrees. This requires the user to guess by feel when its closed. Good if you guess right, not good if you dont.

Further, the spout adds about 2 inches to the end of the oil container, which is okay for Continental engines with their automotive-style large-mouth filler necks but not so good for Lycoming engines with the smaller filler thats sometimes recessed behind a too-tiny oil door. You have to fish the spout into the filler then reach in and open the valve. Quite awkward, in our view.

Also from Sportys is the Oil Filler Spout (catalog 9693A for $3.95 plus shipping). Once again, it fell short of our criteria because it doesnt have any open/close control, just a cap that goes on the end of the 4-inch spout.

Not a great solution either, since the cap has to be removed before upending the oil bottle. (We wonder if these folks try these products before releasing them to market.)

The long spout is a plus for Lycoming installations, however. If you use one of these, be careful not to drop the cap into the filler neck. It has happened. Another catalog entry comes from Aircraft Spruce and Specialty, number P/N 07-05310. For the paltry price of $1.90, this device is similar to Sportys Oil Filler Spout but it has no cap, just an open tube 4 1/2 inches long. (An extension can be added to increase the reach.) Once again, this one misses the mark because it lacks an on/off flow control. This is somewhat obviated by the long tube, since you can upend the bottle and insert it-hopefully-before the oil begins to flow.

Auto Solutions
The FloTool On/Off spout #10100, available from auto supply stores, has a 360-degree twisting snout with an off position found mostly by feel, again failing the ideal criteria. Like the leakproof spout from Aircraft Spruce, its 5-inch spout is much better than the stubby models from Sportys.

The following FloTool spouts all have a positive control that cams the valve on/off when you twist the base of the spout extension. All but one came with an oil container adapter. The price for identical spouts was not the same from store to store, but each was less than $5.

FloTool number 10101 extends the container only 2 inches, so despite the positive valve spot, its too short. FloTools #30100 comes into the running because it extends the container by 5 1/2 inches and it has a captured cap that fits over the end of the spout after the task is done. Thats nice, since it allows you to add a partial quart without trashing the interior with leaked oil.

Also, we liked the transparent spout extension because we can actually see the oil while were pouring it and positively tell when the container is empty. But the overall length is a bit short to work on Lycomings, although its fine with TCM engines with the larger oil filler necks.

One of the nicest designs-although flawed-is the FloTool 10105, with its overall 10-inch transparent extension and captured end cap. Although it comes with three adapters, none of them fit a one-quart oil container so, well, whats the point?

The FloTool 10106 is the answer if you cant get the oil container close in to the filler neck, as on a Cherokee Six with the center mounted oil door or any twin where the oil door and neck are a long reach from the side of the nacelle. This spouts transparent extension is 12 inches long and has a captured end cap.

To their credit, all FloTool adapters have separate plastic gaskets, which ensure a tight oil-proof seal. The two from Sportys had no gaskets but probably would not leak in normal use, save the occasional loose drop now and then.

And The Winner…
Our choice for our Cessna 172 is the FloTool 10106, with 12-inch extension. It has the oil container adapter and a captured hose end cap. If the transparent hose is too long for your needs, just cut its length to fit, using a knife or kitchen shears.

Second choice is the leakproof spout from Aircraft Spruce. No flow control but the long snout is nice and no end cap to fuss with or lose. Some notes on avoiding messes after the fact: We just leave the spout on the oil container after its empty. Removing the spout from a freshly emptied bottle guarantees getting oil everywhere, so avoid it until the next oil add is necessary.

If you dont want to carry the empty container, remove the spout, wrap it in paper toweling or a rag and place that inside a box, plastic bag or other container that wont let oil come in contact with the exposed aircraft interior. (By exposed, we mean carpet or upholstery.)

If you use rags, replace them now and again, since theyll soon become oil saturated and will thus stain anything they come in contact with.If you choose the OilValve, place the oil container cap on the end of the spout to contain those last dribbles. With the FloTools so equipped, replace the captured cap. From our trials, it looks secure enough to prevent any oil dribbles from making a mess in the airplane. And when switching it from bottle to bottle, we didnt find it to be unacceptably messy.

A plastic bag that zips closed works best but if you cant find one large enough, get a small plastic garbage bag, either white or clear and secure it with a twisty. A Tupperware-style kitchen container also works nicely and is easy to clean with a gas dampened rag when it becomes too oily. Some owners even carry disposable surgical gloves to avoid the mess. For further clean-up, toss some dry paper towels, old dish towels and Wash N Dry towelettes into your oil containment device, be it a box of some sort or a bag.

That will save you a trip into the FBO to wash up your oily mitts after checking and adding oil. The used towelettes and paper towels get tossed into the bag before sealing.

Ward Miller is an instrument rated pilot who used to spill a lot of oil. He lives near Poughkeepsie, New York.