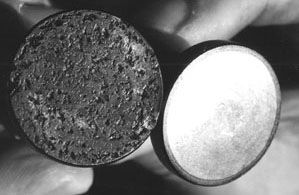 When it comes to picking an engine oil, slipperiness-the ability to prevent wear-catches all the glory. But as we reported in last months article on oil anti-wear properties, corrosion protection is more important than protecting against wear, which most GA oils do relatively well.

For the owner who flies dozens of hours a year or even as many as 100 hours, keeping the cylinders, cam and tappets free of rust and pitting is by far the greatest challenge in making an engine last. So even an oil with exceptional anti-wear properties may be a poor choice if it cant keep rust at bay.

As we reported in last months article, the additives make the oil. And its not much of an exaggeration to say that the corrosion inhibitors make the additives.

Moisture and Acids
Most of us think of certain parts of engines running nearly cherry red hot, thus we dont visualize engines as moisture makers. However, water is actually a significant by-product of the combustion process and it finds its way into engine oil.

Considerable moisture condenses in the crankcase and on all internal surfaces and if the oil isnt brought up to the proper operating temperature and kept there, the oil will retain moisture, wreaking havoc inside the crankcase. Most knowledgeable engine and oil experts say the oil ought to run no cooler than 180 degrees F, winter or summer; 210 degrees F is better.

In addition to moisture, various blow-by contaminants and acids foul the oil supply and reduce its capacity to protect against corrosion. In fact, any acids present attack the engines internal components. The less the engine is operated and the higher the humidity it lives in, the higher the risk of corrosion.

Flying often and changing the oil frequently helps, or so goes the accepted wisdom. But a good anti-corrosion additive in the oil is also a must. Typical types of corrosion inhibitors for GA piston oils include imidazoline and succinamide, which help the oil stick to metal surfaces to keep them free of direct moisture contact. Theres little doubt these inhibitors work.

In fact, unless you fly regularly-every few days or at least once a week-and/or live in a desert environment, we simply cant recommend using an oil without corrosion inhibitors. This is especially important for Lycoming engines in which camshafts are placed high in the crankcase where the oil can drip off, leaving the lobes suspended in moisture-laden air.

Our Tests
Oils we tested for anti-corrosion include AeroShells W100 Plus, the companys semi-synthetic AeroShell 15W50, Phillips X/C and Exxons much-talked-about Elite. Of all these oils, only Elite, Shells W100 Plus and 15W50 have corrosion inhibitors. For the most part, it shows.

Corrosion testing of four oils and three additives was performed using a simple condensing humidity test chamber (a re-sealable five-gallon polyethylene bucket) and matte finish steel Q-panels. The panels were exposed to humidity condensed into liquid water by fluctuations in temperature around the ambient dewpoint.

In short, these are similar conditions the typical engine endures on the ramp or in a hangar. The water used was mildly acidified with hydrochloric acid. We used two concentrations of acid to verify trends and repeatability in the testing procedure.

The oils tested were AeroShell W100Plus (50-weight with anti-wear and anti-corrosion additives), AeroShell 15W50 semi-synthetic, Phillips X/C 20W50 and Exxons Elite 20W50 semi-synthetic. The additives included Avblend, Microlon and Xtend, a proprietary corrosion inhibitor/anti-wear package tested by Ed Kollin for experimental use. Its not yet on the market. Well have more information on additives next month.

The test pail contained a plastic cross member with 10 sample supports. Each support held one sample panel and all of the samples were held at the same height, 3 inches below the removable top. A single lot of SAE 1010 low-carbon mild steel was used for the test panels.

The humidity was supplied by placing 200 ml of acidified water in the bottom of the pail, sealing the top and placing it outside in the summer sun. The temperature reached 100 degrees in the sun and cooled to the mid 60s at night.

The test panels were dipped into beakers containing the test oils and additive blends. The panels were then placed in an oven at 220 degrees F for 30 minutes, where they continued to drain/drip. This was done to simulate engine shutdown and helped to demonstrate a relationship between film thickness and protection. The samples were then placed into the bucket and checked once a day for corrosion.

Test Results
Our tests showed that Shells 15W50 and Elite were statistically equal in corrosion protection, even though Shell looks a bit better on the chart. Both did significantly better than Phillips X/C, which is a good representative mineral-type engine oil.

AeroShell W100 Plus, supposedly with the same anti-corrosion package as 15W50, didnt perform nearly as well as its semi-synthetic counterpart, a bit of a surprise we werent able to explain. (Neither could Shell when we contacted them to ask.) To a degree, judging corrosion protection is subjective but its also hard to miss which oils work well and which dont. This is done simply by judging what percentage of the panels appear corroded over what time frame. The benchmark we used for the chart above was 50 percent corrosion coverage. In other words, how long did the oil protect against that amount of corrosion?

The clear winners were Shells 15W50 at 22 days followed closely by Elite at 21 days. At the low end of the spectrum was Phillips X/C at 16 days and Shells W100Plus at 18 days. Off-the-shelf additives such as Avblend and Microlon didnt help, according to our tests. The Xtend super additive that Kollin tested (called variously ASL-2000 or GA2000 in the tests) drove anti-corrosion performance off the charts.

For all practical purposes, Elite and Shells 20W50 finished in a dead heat. They both seem effective at corrosion prevention and the fact that AeroShell protected for a day longer is statistically insignificant. One thing we feel confident about, however, is discounting the notion that straight-weight oils protect better than multi-weights. The lab data doesnt bear this out. We think corrosion protection depends more on the additive package than the weight of the oil.

Exxons Exceptions
As noted in the accompanying article on page 7, Exxon has challenged our test results, both for anti-wear and anti-corrosion. First, lets examine the anti-corrosion issue. Exxon argues that our testing wasnt done in a lab environment and that hydrochloric acid isnt a combustion by-product.

We argue that engines dont exist in lab environments, they live on ramps and in hangars, exposed to wide variations in temperature and humidity. Further, the well-published Exxon tests, in our view, unrealistically use only humidity and the companys graphs dont show a time scale.

As for hydrochloric acid, Exxon says that carbonic, nitrous, nitric, and sulfuric acids can be found in engine oil, yet they didnt use these acids in their testing. Our view is that Exxon relied on a test thats a reference test, not one that correlates to aircraft in the field.

Our test was repeated with two different acid concentrations (.19 and .93 percent) and both gave the same directional results, with both semi-synthetic oils providing better protection than the unadditized oils. Further, hydrochloric acid, along with hydrobromic acid (from ethylene dichloride and ethylene dibromide lead scavengers used in leaded fuel) and acetic acid are used in the recently designed Ball Rust Test (BRT) for the American Petroleum Institute certification of passenger car oils. Passenger cars currently use unleaded gasoline and yet the API certification test still uses hydrochloric acid to increase the severity of the test.

On the anti-wear side, we take exception to Exxons characterization of our tests as like Tiger Woods playing bridge. In our view and that of our expert, Ed Kollin, the tests are more akin to Bobby Riggs playing tennis. Exxon claims that the Falex pin test is normally used to evaluate heavy gear oils. Thats true if the normal protocol is followed, but we reduced the pin pressures significantly to simulate more closely engine conditions, as we explained in great detail when we forwarded our results to Exxon. These pressures were dramatically lower than those used for standard extreme pressure (EP) lube tests.

Nor did we pull the test protocol out of thin air. We selected this test based on a paper published by Phillips, thus we believe its a legitimate, fair test of anti-wear properties on an accelerated basis. In our view, the fact that Exxon Elite either failed-twice in our tests-or had higher wear rates in Exxons own tests, suggests that its anti-wear package could be improved or is more suitable for an EP environment.

Conclusion
As we stated in the previous article in this series, any of the oils tested are suitable for use in aircraft engines. We cant honestly say that any of them are substandard or that any should be avoided.

However, we remain impressed with AeroShells 15W50 multi-grade. It appears to us to be a good all-climate oil with excellent anti-wear properties and anti-corrosion properties. For anti-corrosion alone, Elite is essentially identical to AeroShell 15W50. If you prefer straight-weight oils-and we cant make an argument for them-Shells W100Plus has good additives, too, although this oil didnt do as well on the anti-corrosion front.

Exxon did well in the anti-corrosion testing but, in our view, was far less impressive than AeroShell 15W50 in anti-wear protection. Were somewhat disappointed with Elite, in truth. We think Exxon had a good opportunity to deliver a new, high-tech oil with an advanced additive package but it appears to us as if it hasnt done that yet. (Are you listening Exxon R&D?)

Performance wise, Phillips X/C is an also ran, in our estimation. Its not exceptional in either anti-wear or anti-corrosion properties, according to our tests, but our expert, Ed Kollin, says it has an exceptionally good basestock. Could additives improve it? We think so. But the right additives have to be used. In next months issue, well look at how some of the more common additives affect the performance of oils.

Coy Jacob is an Aviation Consumer contributing editor. He owns the Mooney Mart in Venice, Florida.