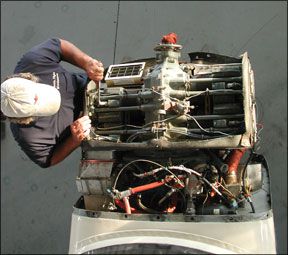 Is the aircraft maintenance industry broken? Or do we just like to carp about how hard and expensive it is to get an airplane fixed? To put numbers on these questions, we published a survey in our online publication, www.avweb.com asking about maintenance experience and opinions.

A total of 455 pilots and owners contacted us, the vast majority of which (88.2 percent) operate single-engine piston aircraft of some type. There were a smattering of piston twin and turboprop operators, too. Our survey revealed that

97.1 percent of owners actively participate in their aircraft maintenance, either managing it or turning wrenches. No surprise there. Slightly fewer, 78.2 percent, told us they regularly perform preventive maintenance such as changing oil and spark plugs.

Also not surprising is that owners think the price of parts is too high but, interestingly, the majority think the cost of labor is fair. (We didnt expect that, frankly.) The chart at right summarizes some of the surveys findings. One other surprise is that getting parts is a big enough hassle to represent a major maintenance challenge for owners.

Owner comments tell the tale: “I work with my mechanic in my own hangar,” one owner told us. “I do the grunt work he doesnt want to do. He has taught me many things and gives me direction on what he expects. The only downside is the length of time it takes to complete the inspection, mostly involving identifying the parts needed then ordering and waiting for them to arrive.” Like 45.7 percent of respondents, this owner regularly assists his IA in performing the aircrafts annual inspection.

One reason involved owners give when asked to comment on why theyre involved is the poor quality of work at some shops. “At the last annual, the oil filter was not safety-wired, a mag AD was missed-although the same shop installed them-and on my first trip out, the fuel selector leaked and left me stranded for repairs,” wrote one owner.

Another told us he has taken his Mooney to “top-rated big service centers. Despite this, my first annual was a disaster. Oil plugs were not safety wired, my engine monitor screws were not installed (the instrument actually fell behind the panel during the first flight) and a bad mag wasnt noticed. This was a real disaster that could have cost me my life! All that was despite it being a top shop.”

Would an owner becoming more involved in managing and performing maintenance on his aircraft prevent these problems? Not necessarily. But an extra set of eyes-with a major, vested interest-cant hurt. Of course, any time extensive maintenance is performed, a preflight inspection of similar extent should be done. The benefits associated with becoming personally involved in maintenance were summed up by another owner:

“The only reason my maintenance has gotten easier is my increased knowledge and the fact that my ability to make maintenance decisions has gotten better with time.”

In addition to anecdotes describing legitimate maintenance-related horror stories, there are many specific challenges owners have. “Unreliable A&Ps, sloppy work, unprofessional behavior,” wrote one. Costly parts-and delays getting them-also were issues for some. “Increasing costs for parts and routine supplies such as filters, batteries, etc.” wrote another.

The particular challenges of aging aircraft also are proving vexing. One owner told us aging aircraftwas the greatest challenge he faced. Another wrote, “I fly a Navion Rangemaster, a fairly rare but great airplane, and finding a mechanic that I can trust to know this airplane is very difficult. I try to do a lot of the work myself with my mechanic signing off.”

Other segments of the industry arent getting any younger, according to an owner who detailed his specific situation: “My very good and reasonable IA is getting old (like me) and takes forever to get around to doing work or an annual. Im afraid my source of cheap labor may be ending.”

That comment highlights a recurring theme: As the old-timers die off or retire, fewer technicians know how to work on older aircraft-or even want to. Many IAs are concerned with liability, since signing off an annual on a 40-year-old airplane is also signing off all the work done over the 39 previous years. That realization alone has forced many shops to decline work on older aircraft.

In reviewing the survey results and owner comments, a recurring theme emerges: Owners who are closely involved with their aircraft maintenance have much greater confidence that work on it is performed cor rectly. “Over the years with multiple airplanes, I have tried a little bit of everything: had the FBO do it, had the manufacturers dealership do it, had an independent do it. The best experience has been with the manufacturers dealership. Owners need to talk to the folks maintaining their aircraft as though they were part of the crew-because at the end of the day, they are. I fly IFR at night, over the mountains. I depend on my airplane and I know I can because I know that the team on the ground has done a good job.”

Based on the results our survey obtained and, especially, the comments, we conclude an involved owner not only has some money left over after an annual inspection but hes also more comfortable with the aircrafts mechanical state. Hes familiar with how things work and fit together, and has greater confidence in his machine. As one owner put it, “Getting the most from your maintenance organization means educating yourself.”