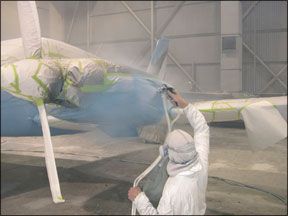 There arent many certainties in the realm of aircraft maintenance, but we can think of at least one: Not every pilot knows a good paint job when he sees it, but anyone can spot a 100-footer that looks nice from across the ramp but is a speckled, orange-peeled mess when viewed at close range. Fortunately, there arent many of those.

In fact, according to the findings of our most recent paint shop survey, there may be fewer paint shops to pick from than there were a decade ago, but the shops appear to be turning out better work or at least providing better customer service. That means that finding a good shop to paint your airplane shouldnt be an agita-drenched exercise in fear and frustration. There appear to be plenty of shops out there doing good work and although the top shops arent cheap, the customers we surveyed seem happy with the results.

Since we last surveyed the market five years ago, some shops have either disappeared or didnt pop up on our radar. On the other hand, we found a few shops we hadnt encountered previously. More important, the old standbys Dial Eastern States in Ohio, Reese Aircraft in New Jersey and New York, Oxford Aviation in Maine, Sunquest Specialties in Washington and Eds Aircraft Refinishing on Long Island, continue to draw rave reviews from customers. These shops are on our short list of you-cant-go-wrong facilities. And were sure other favored shops we heard about are just as able.

We heard from some 160 owners in October and November, after publishing queries in

Aviation Consumer and on our companion news service, www.avweb.com. We asked owners what type of aircraft they had painted, how much the job cost, whether it was delivered on time and how the shop managed clean-up and fine detailing. The answer that matters most is whether these owners would go back to the same shop. The vast majority said they would.

Complaints? We heard a few. But, frankly, they were too sparse to make sweeping generalizations. In our estimations, if shops get crossways with their customers, its often because the job was delivered later than promised and/or the shop wasnt responsive to complaints about minor detailing issues, such as dust spots, a bit of orange peel or some overspray.

Our sense is that even picky owners are tolerant of minor oversights by an engine, maintenance or paint shop. But a reasonable owner can quickly become the customer from hell if the shop doesnt answer the phone, lowballs the estimate or digs in on fixing minor squawks.

But shops that rise to the call and fix whats broken earn customer loyalty. “Oxford damaged a deicing boot,” said John Godfrey, who had his Cessna P210 painted by Oxford Aviation in Maine in 2005. “Without protest, they replaced it,” he reported.

As we requested, most of the owners who responded to our survey had their airplanes painted during the past three years; few of the respondents offered stale reports. For that reason, we think the customer reports here are up to date. But shops seem to come and go so although weve confirmed phone numbers and listings for this survey, we cant guarantee theyll all be there forever or even when you call, for that matter.

Our method of rating these shops was to sort them into the top 20 and the honorable mentions. If a shop received at least three blemish-free positive comments from customers or weve heard consistent good reports about it, we included it in the top shops section. The honorable mentions received fewer mentions or garnered a complaint or two.

In our experience, this survey method has yielded good results. Loyal, satisfied customers tend to be enthusiastic and will recommend a shop, minor warts and all. Annoyed customers are just as enthusiastic about tossing brickbats, but we didnt get many of those this time.

Obviously, paint prices vary by type and size of aircraft. A Cherokee Six will cost more to paint than a Cessna 152 and a King Air will cost more than both combined, and then some. According to our survey, the average cost of painting a single is $8777. The lowest reported price for a single painted by a name shop was $4900 for a Cozy done by Artcraft in Santa Maria, California. Experimentals may be cheaper to paint for several reasons: Theyre smaller, the owner usually does the prep work, theyre often a single color and they dont have to be stripped, a significant component of new paint costs.

At the top end of the scale, the most expensive reported paint job for a single was $20,358 for a Cherokee 180 done by Oxford Aviation in Oxford, Maine. We surmise that this price also included interior work, which the shop also does.

Its often said that in aircraft services, you get what you pay for and unless owners adjust their expectations to suit the size of the invoice, that might suggest a cheap job wont be as satisfactory to the owner as would one costing twice as much. Maybe. But our survey revealed lots of owners satisfied with inexpensive paint work. Richard Kaufmann had his Mooney M20J painted by Aircraft Refinishers of South Texas in Devine, Texas, for a total of $5350 and reported outstanding results, although the job was late.

“I requested no strip as my airplane was strictly an Arizona airplane with no corrosion. This reduced the price by $2000. I had researched no stripping for 10 years and feel stripping is not required or desired for a good base. Results are excellent. Id do it again,” he told us.

Speaking of stripping, the dominant method is now chemical stripping, not bead blasting. When it was first introduced, bead blasting was blamed for damaging metal surfaces and even instruments and radios if the media found its way into the cabin. In recent years, weve heard no such complaints. We found only a smattering of beefs about chemical stripping. “A local shop performing the annual inspection had issues with overspray and stripper residue. Kracon paid for the local shop to correct the issues,” said Cessna Cardinal owner Steve Mann, who had his airplane painted by Kracon Aircraft in Lincoln, California.

We asked readers to rate the paint jobs as poor, fair, good or outstanding and the lower priced shops seemed to garner as many outstanding ratings as did the more expensive shops. Moreover, the high-priced shops got the same kind of brickbats for being late with the job as did the less expensive facilities.

Missing the agreed-upon delivery date seems distressingly common in the aircraft paint industry 44 of the 160-plus survey respondents told us the job was delivered late. Thats one in four. Some were just a few days late, some were months late. Were not sure if shop tardiness affects the customers perception of the paint job or whether late shops just turn out lesser quality. Either way, of the shops who were late, only 40 percent netted outstanding quality ratings compared to nearly 90 percent who got top marks in the group of shops reported to be on time with the work.

To be fair, some owners bring tardiness on themselves by requesting changes or additions, but the better shops roll with these punches or carefully explain how change orders will impact delivery time. The shops that do this right are less likely to get dinged for being late. One shop praised for this was Texas AeroColors in Brady, Texas, where George Hawkins had his Cessna Cardinal painted at a cost of $9398. His report:

With top shops scattered around the country, is it worth flying to them to have the job done? Or just the opposite, flying to a distant shop to save money sometimes a lot of money? Were not enthusiastic about the cross-continental paint schlep. For one thing, it adds cost in fuel, time and hassle and for another, it complicates warranty work. Shops with superb customer support Kracon, mentioned above may step up and provide warranty by remote control. But know that before you shake hands and sign the contract.

“I traveled from Long Island to Arkansas to save $7000 versus Eds Aircraft Refinishing,” wrote Paul Davis, who still paid $12,000 to have his Commander 112 painted by Grays Aircraft Refinishing in Ozark, Arkansas. But when asked if he would do that again, he said “maybe.”

On the other hand, Milton Suggs said this: “If I could find a shop closer to home station, I would.” He had his Cherokee painted by Murmer, Inc. in Houston at a price he didnt mention. He rated the quality as good, but not outstanding. In our estimation, it would be worth flying some distance to a well-established shop thats been doing first-rate work for years say KD Aviation in New Jersey, Dial Eastern States in Ohio, Sunquest Specialties in Everett, Washington, Sky Harbour in Goderich, Ontario and Oxford Aviation in Oxford, Maine, to name a few.

In doing this, however, owners need to accept that they wont be able to oversee the work in progress. Further, when they arrive for pick-up to find the job not to their liking, more time, money and delays may be incurred to set it right. Measure that against having the job done locally or a state away.

Either way, there are more than enough paint shops out there to turn a faded old beater into a like-new airplane, if not a show winner. With the results of our shop survey in hand, finding one shouldnt be difficult.